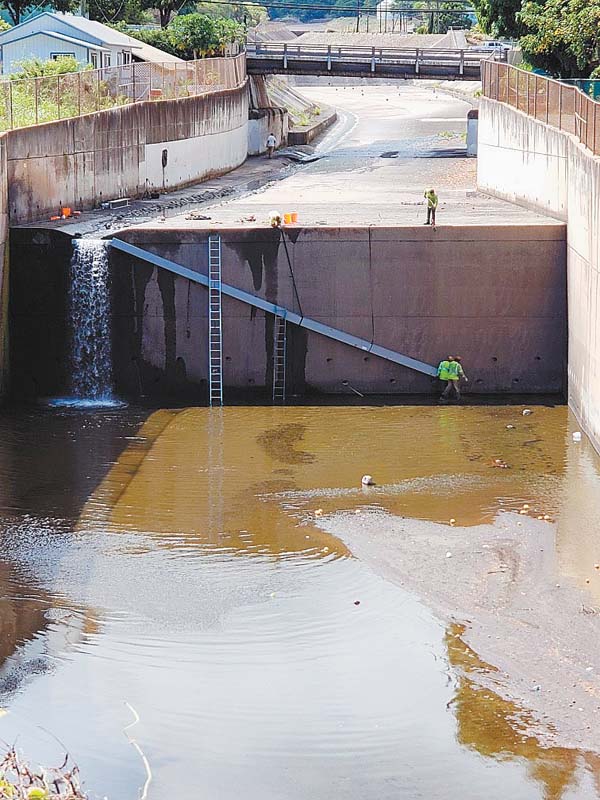 A 22-foot fish ladder, shown on Oct. 29, was built in the Wailuku River to help ‘o‘opu traverse the river. However, flows were not restored properly following the project, leading to a major fish kill. AVERY CHUMBLEY photo

Damage to diversions and redirecting of stream flow in the Wailuku River reduced water intake to the county treatment plant to the point that it had to shutdown three times since Oct. 28, the county water director said.

The latest treatment plant shutdown occurred Sunday after the completion of a fish ladder construction project in the river led to a fish-kill event.

While county Director of Water Supply Jeff Pearson said he is supportive of mauka-to-makai stream flow, he also is focused on maintaining water as a public trust resource.

“My point of view is that I am in total support of connectivity, but we have to also consider the public trust users,” he said Tuesday. “I am not against water in the stream in any way, but I am also in support of water going to the treatment plant.”

Due to the redirecting of stream flows above the Wailuku Water Co. intake, the department said it has experienced at least three shutdowns of the Iao Water Treatment since Oct. 28, with the most recent stoppage Sunday.

“When this occurs, DWS loses valuable source for our Central Maui customers,” Pearson said. “This loss of surface water source puts a greater strain on our ground water sources. We have limits for both Waihee and Iao aquifers on pumping, and over pumping to meet system demand may violate the maximum sustainable yields of these aquifers.”

The redirection of water makai toward the river mouth appears to coincide with state-ordered Wailuku River water diversions to build a fish ladder, said Avery Chumbley of Wailuku Water Co.

Last week, hundreds of ‘o’opu, or Hawaiian goby, were inadvertently killed at the completion of the fish ladder project because of a lack of water in the river. The state Commission on Water Resource Management asked Wailuku Water Co. and Mahi Pono to divert flows on Oct. 28 and 29 for the project.

The irony of the fish kill is that the state Commission on Water Resource Management project was intended to improve the habitat of life in the river, including the fish, shrimp and snails.

Community members scrambled to try and save `o`opu by scooping them up and transporting via buckets and coolers to higher ground. Toward the end of the week, the commission confirmed the “substantial fish kill” and issued an apology, saying it “regrets this situation.”

On Tuesday, commission spokesman Dan Dennison said that the commission is continuing to coordinate with the U.S. Geological Survey “to get more accurate stream gauge readings to determine actual water flow in Wailuku River.”

“This information is important in balancing what flows must remain in the stream to protect in-stream uses and what water can be diverted for off-stream uses,” he said.

Chumbley said his company’s temporary diversion for the 22-foot fish ladder project, made of PVC pipe, tarp and sandbags and ordered by the state, was illegally removed Oct. 28. There also has been vandalism with chains cut to close valves and rock walls built, he said.

Chumbley said vandalism has occurred on Wailuku Water Co. land before, typically during “periods of high emotions and reactions.

“Obviously, it was one of those times,” he said. “Because of the native fish deaths, it riled people up. They felt empowered that they could go in and trespass and do criminal property damage’ not just to a private property’ but to a public utility.”

Chumbley said he has evidence in multiple incidents, adding that he doesn’t want to have to contact authorities.

“I may have to call Maui Police Department and report criminal trespass and criminal damage, but I don’t want to do that,” he said. “I know the frustration and level of anxiety are high, but this is not the way for them to solve their frustrations.”

Hokuao Pellegrino, board president of Hui o Na Wai `Eha, a group that works to protect and restore four Central Maui streams including the Wailuku River, said his group does not sanction illegal actions. However, he questioned the perception that natural stream flows could be redirected, and alleged that Wailuku Water Co. was wasting water with the Hui filing a formal complaint with the state.