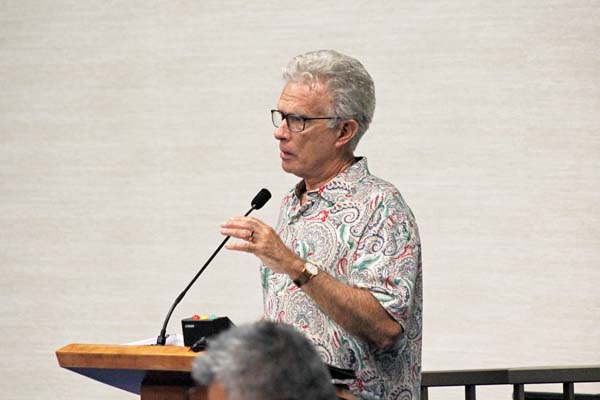 Mark Hyde, who helped draft a charter amendment that would create a county manager system in Maui County, answers questions during a council Governance, Ethics and Transparency Committee meeting on Tuesday. Supporters of the system say it will take the politics out of daily operations, but others are concerned it will create an imbalance of power between branches of government. The Maui News / COLLEEN UECHI photo

WAILUKU – Council Member Tamara Paltin remembers what it was like to be a county lifeguard over 12 years of changing political pressures from Mayor Alan Arakawa to Charmaine Tavares and back.

It’s why Paltin and some council members are supporting a newly revived proposal to hire a county manager to act as the chief operating officer of Maui County, in charge of the day-to-day operations of department affairs and separate from the two- or four-year terms of elected officials.

But other council members harbor concerns. The latest proposal would transfer several powers from the mayor to the manager, which they say would create an imbalance of power between branches of government.

“I do have a concern in that to me it blurs the lines of the separation of powers when the council gets overly involved in what I consider to be an executive function,” Council Member Alice Lee said.

On Tuesday, the council’s Governance, Ethics and Transparency Committee discussed the proposal but took no action; members said the purpose was mainly to get the ball rolling and allow people time to consider it before Election Day.

In December 2015, a Special Committee on County Governance began exploring the possibility of installing a county manager system in Maui County. The 11-member citizen committee recommended having a county manager, but the proposal stalled after a council committee decided it wasn’t ready for the 2016 ballot.

The latest charter amendment, proposed by council Chairwoman Kelly King, would establish an Office of the Managing Director, which would replace the current Department of Management. The managing director would be hired by the council through a recruitment and selection process involving the mayor, council chairperson and a three-member citizen group. The managing director would oversee the county’s daily operations, the appointment and removal of most department heads and implementation of county policy.

Under the proposal, the mayor would serve as the county’s chief executive officer and supervise the managing director’s work. The mayor would still represent the county in intergovernmental affairs and have the authority to approve or veto bills, nominate board and commission members and enforce county laws.

King said the original proposal would have replaced the mayor but eventually evolved into a mayor-plus-county-manager model. King said the goal is to cut down on the turnover that happens with every administration and allow the managing director to focus on county business and not worry about whether the mayor gets reelected. She added that it would give the managing director more say in selecting department heads.

“In the business world, you wouldn’t hire a manager and then make them work with people they didn’t want to work with or they didn’t pick themselves,” King said. “And so this is trying to put more of that business model into the county . . . with the intent of getting more done and getting people who are highly qualified to come work together.”

Under the proposal, the managing director would have the authority to appoint all of the directors that the mayor currently appoints, except for the departments of corporation counsel and the prosecuting attorney. The council would still have the ability to approve the directors, per the charter amendment passed last election cycle.

Mark Hyde, a member of the citizens group For the Good of Maui, which supports having a county manager, said that both the prosecuting attorney and corporation counsel report to the mayor and provide oversight over the manager, so they would still be appointed by the mayor. He added that some appointments call for consultation with the mayor (the finance and water supply directors).

“The manager, in consultation with the mayor, would and could do certain things. At the same time, you don’t want the mayor telling the manager who to hire because you in some respects defeat the purpose of having the manager assembling the team that he or she wants to create,” said Hyde, who helped draft the proposal.

“The CEO is not a mere figurehead,” Hyde said. “The CEO is the leader who sets the agenda. . . . Ultimately, the mayor manages the whole organization.”

Hyde said both the mayor’s and managing director’s salaries would have to be reviewed in light of their changing duties. He said the managing director’s salary would depend on the person’s duties, experience and the going rate for similar positions. He recommended giving the salary decision to the council instead of the Salary Commission to allow the council flexibility to negotiate in the hiring process.

But a number of council members were concerned about the changing of powers. The council would ultimately get to hire the managing director, who would take on several duties currently assigned to the mayor, including the power to appoint directors; preparing and submitting an annual budget “in consultation with the mayor”; make temporary transfers of positions between departments; and reviewing each department’s finances, organizations and methods.

“I believe this is making a fundamental change of structure in local governance,” Council Member Riki Hokama said. “We want the council to be the top dog . . . instead of equal to the executive branch. I have issues with that.”

Hokama said he’d “rather deal with the elected than the appointed, personally.”

Council Member Tasha Kama was also concerned about proposing a major charter amendment with another charter review coming up. Every 10 years, a Charter Commission is tasked with reviewing the entire document. The last commission convened in 2011 and made its report in 2012. Kama said if the charter is going to be reviewed within the next couple of years, “I don’t want to do this twice.”

“That’s a lot for our people to have to consider,” Kama said. “I’d be looking at doing this just one time and do it right.”

She added that the discussion on Tuesday “reminds me of our tax reform,” which was passed recently by the council even though community members had questions about the impacts and called for further hearings.

“Our people need to know beyond a shadow of a doubt that when they go to the ballot, they know exactly what they’re saying and what they’re voting for,” Kama said. “And I just want to make sure that our people are clear about what the charter amendments are.”

The committee deferred the issue on Tuesday.

Charter amendments generally need to be approved by August in order for them to make it on the ballot in November.

The committee went into a nearly hourlong executive session before voting 6-0 to recommend the resolution, with the requirement that the administration provide updates on the case. Members Lee and Keani Rawlins-Fernandez were excused, with King recusing herself based on issues discussed in executive session. The matter now moves on to the full council.