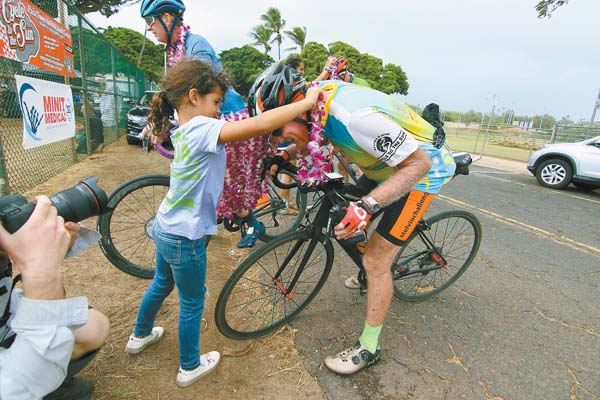 Hailie Feliciano-Balinbin gives a lei to Mike Gibbons of Haiku as he crosses the finish line of the inaugural Pedal Imua event at the War Memorial Stadium Complex on Sunday. The 60-mile ride started and ended at War Memorial and looped clockwise around the West Maui Mountains. About 100 riders braved the rain, wind and curving road to help raise funds for Dream Imua, a program of Imua Family Services that helps grant wishes to kids who’ve experienced trauma or crises. The Maui News / COLLEEN UECHI photo

WAILUKU — The weather in Wailuku was gloomy and raining, but 11-year-old Jackson Gilbert couldn’t have been happier as he raced his shiny new bike across the field at the War Memorial Stadium Complex on Sunday.

“It’s amazing,” he said as he pulled up alongside his great-grandmother, Anna Ribucan. “I’m selling the other bike.”

Jackson was among several kids who received brand-new bikes during the inaugural Pedal Imua Gran Fondo, a benefit race for Imua Family Services’ Dream Imua program that helps grant wishes to Maui County kids who have experienced trauma or crises.

On Sunday, about 100 cyclists braved the rain, wind and winding curves along the 60-mile route that started and ended at the War Memorial Complex and looped clockwise around the West Maui Mountains — which organizers said is considered one of world’s best rides.

“Athletes love when they get to do something, especially for children that can’t do that same thing that they can do,” said Dean Wong, executive director of Imua Family Services. “Paddle Imua, those ocean sport athletes, they don’t want to take for granted that they get to be in that ocean and that open water and do that sport. It’s kind of the same thing for these cyclists as well.” 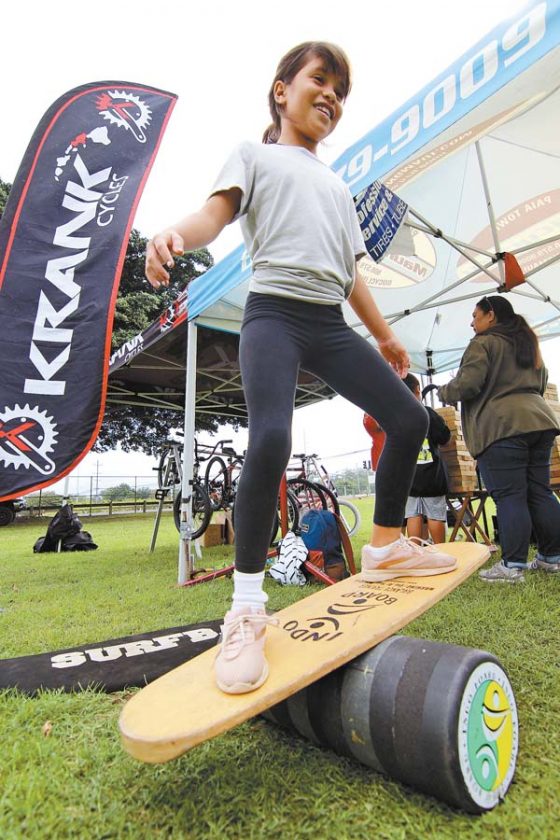 Ten-year-old Amy Simpson-Kane of Kuau shows off her skills on a balance board at the Ohana Festival during the Pedal Imua event. The Maui News / COLLEEN UECHI photo

“We started to realize there was a cross community of athletes,” Wong said. “When they can’t do one, they can do the other.”

Local cycle shop owners approached Imua Family Services in hopes of getting a race going on Maui, and Wong said it “just felt like this was the year to do it.” About 100 riders registered for Sunday’s event, with about 80 riders completing the full race and 20 doing a partial ride counterclockwise up to Turnbull Studios, Wong said.

The beneficiaries are the kids, who get to see their wishes come true through Dream Imua. The program started out on Maui about 20 years ago as A Keiki’s Dream, a local version of the national Make-a-Wish program. When the executive director of A Keiki’s Dream retired about five years ago, Imua Family Services took over.

“Dream Imua is about fulfilling dreams for children that are in a place of crisis in their life, whether it’s a health crisis, trauma, abuse, neglect, and I mean at a pretty critical level,” Wong said. “They’re referred by social workers and doctors and pediatricians. . . . We try to build a dream for them that actually gives them a sense of community to support them through the crisis they’re going through.” 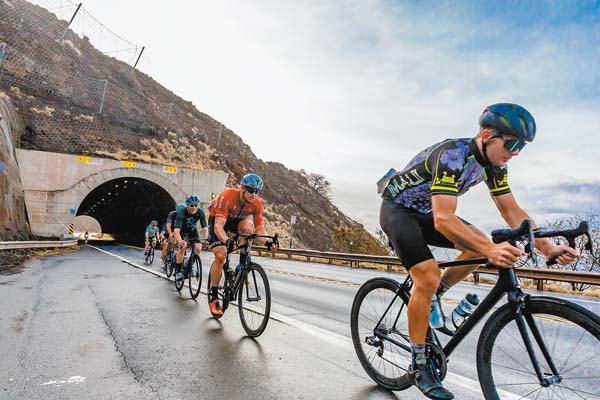 Cyclists make their way across the pali during the inagural Pedal Imua event that ended at the War Memorial Stadium Complex on Sunday. Organizers said the 60-mile loop around the West Maui Mountains is considered one of the best rides in the world. BRYAN BERKOWITZ photo

Jackson got his dream day about a year ago. Joined by his cousin and best friend, Jackson took a ride on a Jet Ski in Kahului Harbor, dodged flying orbs of paint at Maui Paintball and capped off the day at the Maui Dragon Fruit Farm in Lahaina, where the boys rode the zipline and climbed inside a giant inflatable “Aquaball” for a 250-yard ride downhill.

“It was so fun,” Jackson said. “It was like, during that traumatic time, it was just like everything was better for awhile.”

Jackson lost his mom when he was just 8, and with his father struggling with mental health issues, Jackson ended up in the foster care system. Ribucan said when she and her husband Al spent Thanksgiving with Jackson two years ago, he asked them not to send him back to foster care. They decided to take Jackson in and have been working for two years to adopt him.

Ribucan described her great-grandson as “exceptional” and an “old soul” who is constantly making friends and surprising adults with his maturity. He joined the Church of Jesus Christ of Latter-Day Saints about a year ago, and Ribucan said it gave him “an eternal perspective on his life.”

Ribucan retired from her home health care business when they took Jackson in, knowing it would be a full-time job. In the two years he’s been with them, she’s watched him overcome behavioral issues that many kids in his position would struggle with — thanks to a combination of therapy and consistency.

“There’s not much drama at our house,” Ribucan said with a laugh. “My husband’s almost 80 and I’m 76, so we’re pretty settled down.”

When Ribucan is feeling down, she said Jackson comforts her, and the encouragement goes both ways.

When Jackson misses his mom, his grandma tells him “that one day we’re all going to be in heaven,” Jackson explained. “And I also help my grandma when she’s feeling sad too. Normally just tell her the same thing she tells me.”

Jackson said his mom “wasn’t mean to me one time in my entire life and always helped me with stuff. She was the nicest person I ever met.”

He gushes about his brother too, four years his junior, who lives in Ohio with their stepfather.

“My brother, he’s energetic, smart, funny, cool. We get along amazing,” Jackson said, explaining their shared love of Minecraft and video games.

Jackson loves math and science because, as he put it, “I’m left brained.” He started a drone club at his school, Kihei Charter, and said that someday, he hopes to become a professional FPV drone flyer. When asked what he would wish for if he got another dream day, Jackson doesn’t think twice.

“Probably see my little brother,” he said. “That’s the only thing I want to do.”

Meanwhile, 6-year-old Hailie Feliciano-Balinbin is still living her dream. She’s taken six weeks of riding lessons at Maui Ponies in Kula alongside Dream Imua Coordinator Rainelle Lushina’s two kids, afternoons that Hailie relishes for the chance to ride horses, crack jokes and enjoy the view. She doesn’t hesitate when asked for a joke, resorting to the classic “Why was six afraid of seven?” (Because seven “ate” nine.)

Hailie said she dreams of one day being a horse trainer who lives Upcountry. But perhaps the one thing she loves just as much as horses is writing letters.

“I write a lot of letters to my grandma, to my mom sometimes, and to my sister and brothers,” she explained.

It’s her way of keeping in touch with family she doesn’t always get to see. Hailie’s father spent time in jail, and her mom has been living on the street, so Hailie lives with relatives.

“I like writing a lot, and I like saying ‘I love you,’ because I miss my family,” Hailie said.

She also knows the surefire way to lift someone’s spirits — through a hug. On Sunday, Hailie sported a big smile as she placed leis on cyclists at the finish line.

Lushina said when she first met Hailie, “I noticed that she would kind of do anything that she felt I wanted her to do.” Lushina hoped to change that and help Hailie realize her own needs and wants. Horseback riding turned out to be the perfect way to do it.

“It’s really empowering because all of a sudden you’re on this huge animal and your desires have to be translated to that animal in order for you to proceed,” Lushina said. “You can’t really ask for help from the back of a horse. You have to do it.”

Lushina said Dream Imua chooses 12 dream kids a year, and that the experiences they get go beyond just having a good time.

“People think that I am creating a moment in time that doesn’t translate to a solution to a big problem,” Lushina said. “I get that it could look like that. But what’s happening is we’re looking at what type of framework they’re operating from and how we can shift that.”

Hailie Feliciano-Balinbin gives a lei to Mike Gibbons of Haiku as he crosses the finish line of the inaugural Pedal Imua event at the War Memorial Stadium Complex on Sunday. The 60-mile ride started and ended at War Memorial and looped clockwise around the West Maui Mountains. About 100 riders braved the rain, wind and curving road to help raise funds for Dream Imua, a program of Imua Family Services that helps grant wishes to kids who’ve experienced trauma or crises. The Maui News / COLLEEN UECHI photo

Ten-year-old Amy Simpson-Kane of Kuau shows off her skills on a balance board at the Ohana Festival during the Pedal Imua event. The Maui News / COLLEEN UECHI photo

Carissa Moore of Honolulu competes during the first round of the Lululemon Maui Pro on Sunday at Honolua Bay. Moore advanced to the quarterfinals of the WSL Championship Tour finale to earn a spot in next year’s Tokyo Olympics. WSL via Getty Images / Kelly Cestari photos

Caroline Marks surfs in the first round Sunday. Marks earned an Olympic spot after making the quarterfinals.

Army quarterback Christian Anderson gets shoved out of bounds by Hawaii defensive back Khoury Bethley during the second half Saturday.

The Lunas’ Tre Rickard celebrates after the Lunas’ win.

The Lunas’ Treven Tihada reacts after a carry by Joshua Tihada.

Hawaii wide receiver Jason-Matthew Sharsh runs into the end zone for a touchdown during the first half of the Rainbow Warriors’ 52-31 win over Army on Saturday night. AP photos

Cyclists make their way across the pali during the inagural Pedal Imua event that ended at the War Memorial Stadium Complex on Sunday. Organizers said the 60-mile loop around the West Maui Mountains is considered one of the best rides in the world. BRYAN BERKOWITZ photo