Grand Wailea scales back its expansion 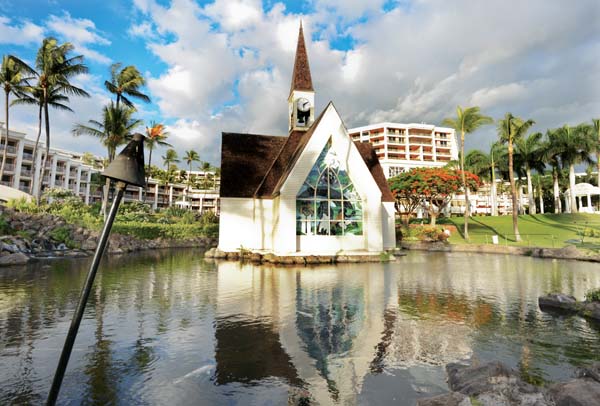 The Grand Wailea’s revised plans include retaining the hotel’s beloved Seaside Chapel, which had been slated for elimination. This photo was taken in June. The Maui News / MATTHEW THAYER photo

Grand Wailea Maui, a Waldorf Astoria Resort, is scaling back its expansion plans from 224 proposed rooms to 151 and adding one instead of two new parking garage levels to its nearly 40-acre resort, according to the resort in a letter sent to the Maui County Planning Department in September.

The revised plans also include retaining the hotel’s beloved Seaside Chapel, which had been slated for elimination. Other plan changes include removing 40 bungalow units; a lagoon wing, which would have added 33 rooms; and limiting improvements of the luau area to the addition of artificial lawn turf and renovation to existing restroom facilities.

The earlier plans called for an updated stage, kitchen equipment and additional storage.

The resort’s initial expansion plans have come under fire from those with concerns about iwi kupuna, or ancient burials, on the site, as well as sea-level rise and the growing impact of tourism on the island. They voiced their concerns at a Maui Planning Commission meeting in May on the resort’s special management area permit.

The 776-room resort along Wailea Alanui Drive originally was seeking to add 224 more guest rooms — 72 in the Haleakala Wing, 63 in the Wailea Wing, 41 in the Lagoon Wing, eight in the Chapel Wing and up to 40 bungalow units.

If those plans were approved, it would have made the Grand Wailea the second largest resort by rooms with 1,009, only behind the Westin Kaanapali Ocean Resort Villas and its 1,021 units, according to Hawaii Tourism Authority data.

“These updated plans to enhance Grand Wailea address the concerns we have heard from the community,” J.P. Oliver, managing director of the Grand Wailea, said in an email Thursday. “It is our strong desire to maintain a positive working relationship and be good neighbors in the community.”

He pointed to the overall reduction in rooms from older plans that had been approved years ago but never implemented. The SMA permit for those plans have expired.

The resort says it is reducing proposed rooms by nearly 33 percent, graded areas from 6.65 acres to 3.53 acres for a 47 percent decrease and parking stall additions by 50 percent to 158.

After hearing testimony in May, the planning commission deferred the SMA request while awaiting a letter regarding the project from the State Historic Preservation Division, said Maui County Planning Director Michele McLean in an email this week.

Even with scaled-back plans, Clare Apana of Malama Kakanilua is concerned about the potential harm to burials at the site and says the groups still are asking the hotel for reports on what happened to the previous burials needing to be reinterred.

The intervenors cite a Maui Burial Council report that says there were 300 burials still needing to be reinterred prior to the hotel opening in 1991. The report also says that potentially, a couple hundred more burials have been disturbed in the hotel’s first 20 years.

“We are trying our best for our kupuna to get peace on that land,” Apana said. “We need to know what happened. There should be no more digging in a known burial ground.

“We have every hope the Grand Wailea is going to do the right thing.”

Hotel officials said they have passed along all information they have regarding the burials.

“We understand and are very sensitive to the significance of iwi kupuna,” Oliver said. “That is why Grand Wailea is doing everything we can to plan responsibly for the renovation project — including minimizing ground disturbance. We are absolutely committed to being a responsible steward of the land and making sure that burials on property are protected and respected.”

He added that studies provided by archaeologists and geotechnical experts indicate “a low likelihood” that any iwi will be found in the areas sought for development, and that the hotel is “taking every precaution to minimize that risk.”

McLean said that Grand Wailea will not have to submit a new SMA application because of the changes but can enter amendments. Hotel officials said Grand Wailea is scheduled to appear before the planning commission on Jan. 28.

The Grand Wailea was built in 1991 by Japanese billionaire Takeshi Sekiguchi at a cost of $600 million. In April 2012, the Maui Planning Commission granted approval for the resort to add 300 guest rooms, but construction of the project never began and the approvals expired in April 2015.

The resort changed hands over the years but most recently to BRE Iconic Holdings in April 2018, for $1.1 billion. BRE is a company of New York-based Blackstone Group LP, a private equity firm.

While room and parking expansion plans have been reduced, other proposals remain intact, including renovations to the Hibiscus Pool and deck area and to the facades; a new spa pool at Spa Grande; a new lap pool next to the Wailea Wing and a new grand stairway in the Napua Tower.

The $150 million investment in the renovations is expected to take place in phases over three years.

The project will generate 250 new construction jobs as well as 80 new permanent full-time jobs in key areas, including food and beverage and recreation, the resort said. Oliver said the resort is “the largest private employer on Maui with over 1,450 team members.”

He said the Grand Wailea has invested in sustainability measures, so that the hotel and its proposed renovations do not increase the need for more water or energy.

For example, $1 million has been spent in smart water conservation measures to save 202,671 gallons daily and $4 million in smart energy-saving measures.

“Guests reading this pledge affirm their commitment to behaving respectfully and responsibly,” Oliver said. “By doing so, we’re promoting a future where visitors enjoy the treasures of Maui while protecting its spirit, preserving its beauty and minimizing our impact on precious natural resources and local families.”