In Unified Basketball League, everyone gets a shot 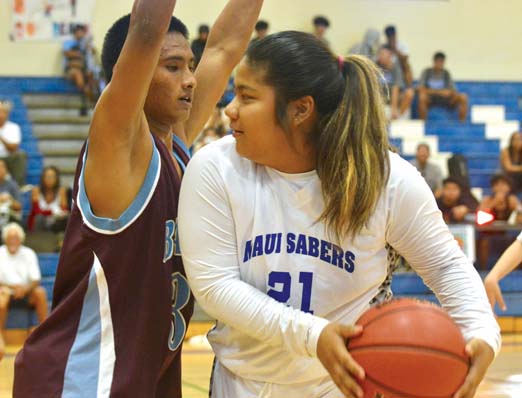 The “all-inclusive” co-ed basketball league focuses on uniting all students with a wide range of learning, emotional, social and physical abilities.

“I think the most amazing part was that, I knew our kids were going to shine, but seeing them running up and down the court waving at their mom and throwing their hands up in the air after they made a basket,” said Adkins, who is also a physical education and special education teacher at Maui High. “There were a ton of people in that gym — I saw family members, I saw parents, and I saw just this sense of proud-ness that their kids were getting to shine, and just being included. That’s the main thing.”

For the opening ceremony at Jon Garcia Gym on Dec. 2, Baldwin’s JROTC drill team delivered U.S. and state flags while another student sang the national anthem and Hawai’i Pono’i. The Bears’ varsity state championship cheer team also joined in the celebration of the league’s inaugural matchup.

“It’s just surreal. I kind of reflected back the other night about what the environment felt like,” Adkins added. “It was a feeling of fulfillment. It’s something that I worked towards for a really long time and it couldn’t have been more special for that to be at Baldwin. The administration was so supportive.” 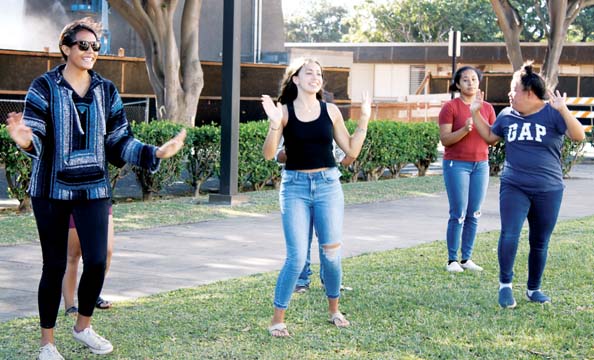 Special Olympics Hawaii, Best Buddies Hawaii and the state Department of Education are all sponsoring the league to help provide uniforms, basketballs and other needed equipment. The league is also made possible by multiple volunteer organizers, scorekeepers, coaches and referees, including retired Maui High principal and complex area superintendent Bruce Anderson.

The unified games precede the Maui Interscholastic League’s scheduled junior varsity and varsity games, with the Bears and Sabers playing their second and third games on Monday and Friday night at the Izumi “Shine” Matsui Gym.

“I think the basketball team is fun. Meeting new people, making new friends with, like, the SPED people from Maui High, it’s so much fun,” said Baldwin team captain Keanu Eldredge last week. “My responsibilities include making sure they are wearing their uniforms and making sure they are doing things correctly, like the drills, the shooting and the passing.”

Baldwin junior Christopher Keanini-Higa, who’s also a top bowler for the Bears, said in a group interview that “it’s fun to support special needs kids, to help them come out and make sure they have fun.”

Adkins also mentioned that the Unified Basketball League has been beneficial for students without disabilities in learning about patience, acceptance and communication, which are skills that are “really going to build our students to be successful, thoughtful, caring people for the future.” 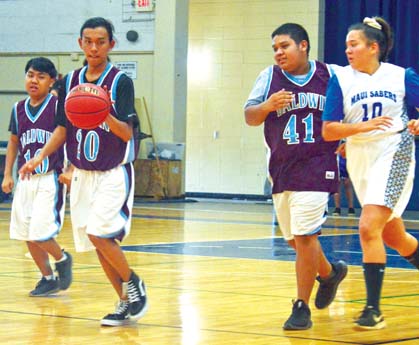 Before the Bears joined the league, Maui High’s unified team operated solo for the past five years, not having anyone to play against unless they traveled to Oahu, Adkins said. But now they are able to have their own crosstown, friendly rivalry.

“With Baldwin jumping on board, it has made a huge difference because it’s making it aware to the community that this is a program that should be here,” she said. “Ted Lusk is making a huge difference at Baldwin, he’s so passionate and so driven, and I honestly believe that’s what’s making it go off at campus.”

Lusk, a 30-year teacher and Best Buddies adviser for the Bears students, said in an email earlier this month that this new league will be “heartwarming as we cheer on students that normally might be forgotten and left behind.”

“At these kind of intriguing games, the kids are thrilled to play and earnestly want to win,” Lusk added last week during class. “I was cheering for both teams to score.”

And Maui County’s unified program “is hopefully here to stay,” considering that the same type of league is already established on Oahu and Hawaii island, he said.

While meeting the new Bears’ unified basketball team earlier this month on campus, Lusk said that the idea is to “look past whatever their disabilities may be, and be all inclusive” because it’s really about “coming together as a community.”

The team is also being coached by the legendary Jon Garcia, who spent 20 years as Baldwin’s athletic director before retiring in 2006, and was the head varsity basketball coach from 1972 to 1995.

“This is the most fun I’ve had. They work hard and they enjoy the game, and they have a lot of fun,” Garcia said with a smile after their second game on Monday at the Izumi “Shine” Matsui Gym. “Some of the better players, you know, they give everyone a chance. At practice, they all try to understand the game and try to work on things, and it’s just kind of rewarding for me after all these years to be back out there. . . . At this level, winning is not so important, it’s just about letting the kids play.”

And as Garcia said, many of the students are brand new to the sport, but are thrilled to participate anyway.

“I was quite a bit nervous at first because I didn’t know quite what to do, but I got used to it and figured out how to play,” Baldwin senior Shane Dagulo said. “It gives me a chance to make friends and meet new people.”

While sophomore Kahinau Solomon, who enjoys inbounding the ball, was a little disappointed in their loss against the Sabers, sophomore teammate Skyler Taasan-Ortiz reminded him of what’s most important and to never lose hope.

“We just have to pull it all together and at least try and do our best to win, even if it means we lose against other schools,” Taasan-Ortiz told Solomon. “It was very tough and tiring. It was my first time ever being a part of a competitive sport.”

Maui High sophomore Alyssa Kapeliela mentioned that the unified league has been fun for her and a “new experience for everybody” to get to play Baldwin, but hopes more teams will join in the future.

“It was nice because, like, we got to work with kids that usually don’t get to play sports because of their disability,” Kapeliela said. “I feel like the other high schools should get involved, but we’re having a hard time, but we’re trying to get it out there.”

Meanwhile, Adkins has been encouraging King Kekaulike and Lahainaluna to join the Unified Basketball League; however, coordinating transportation and finding additional volunteer coaches are just some of the few challenges facing the schools.

But most importantly, Adkins just wants to spread the message of equality throughout Maui County.

Maui High also has a unified bocce ball team, as well as a unified cheerleading squad that brings spirit to all the games.

Sabers senior Kaelyn Garaganza said that the cheer team’s first-ever performance at the opening game “went pretty well” as they tried out four to five routines.

Their follow-up halftime performance at the second game on Monday drew cheers and applause from the crowd.

“It’s been really good, but a work in progress. We’ve been working a lot with our athletes to get better,” said Garaganza, who is also on the Sabers volleyball team. “Sometimes it can be challenging, but it’s not that challenging because once you see it from their perspective, they’re not different from anyone else.”

Up next, the Unified Basketball League’s fourth game will be held at 4 p.m. Friday at Jon Garcia Gym, and a Round Robin Tournament will be held at Izumi “Shine” Matsui Gym on Jan. 11 with times to be announced.

“I have students who dreamed of being able to be a cheerleader or they dreamed of trying out for the basketball team, but just didn’t have the skills,” Adkins concluded. “So this is an opportunity for them to be able to have what they want to do and have their dreams come true.”