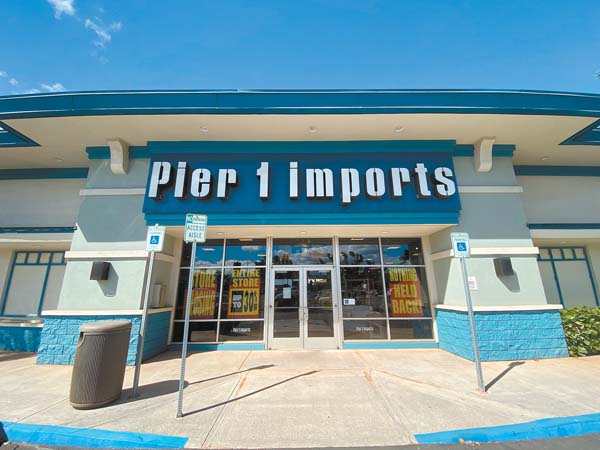 Pier 1 Imports, among the longest standing anchor stores for Maui Marketplace in Kahului, will close its doors maybe end of January or early February. The Maui News / KEHAULANI CERIZO photos

KAHULUI — Much to the surprise of local staff and shoppers, two-decades-old Pier 1 Imports in Kahului will be closing its doors, joining the shuttering of all six other Pier 1 locations in the state.

“I’m so depressed that I can’t even shop,” said longtime customer Rachel Chang, as she stood in the store Tuesday holding a silver Christmas tree and some ornaments.

Pier 1 Imports in Kahului, one of the longest standing anchor tenants in Maui Marketplace, has no set closure date, but an eight-week time frame for liquidation started last Friday, according to Jaren Guillermo, Kahului assistant store manager. He anticipated the store will shut its doors at the end of January or beginning of February.

Texas-based Pier 1 Imports, a home furnishings and decor retail company, recently announced the closure of 70 stores nationwide — including one at Kapolei Commons on Oahu — as it faced a drop in sales. Media reports indicated that the number could grow as talks of a potential bankruptcy filing emerged.

Most stores in Hawaii, though, thought they would be saved. Pier I had opened a store on Kauai as recently as 2014. 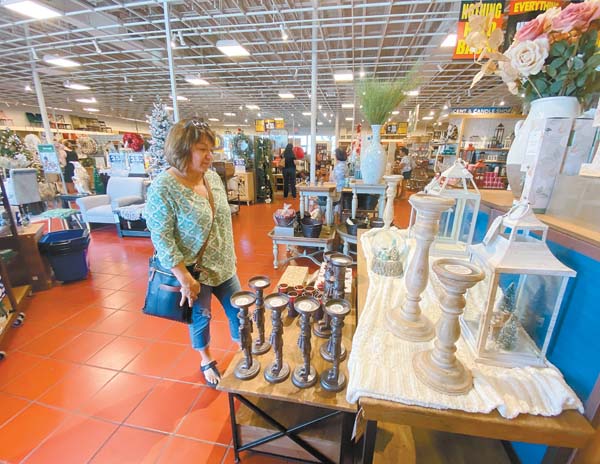 Pukalani resident Debbie Walsh checks out liquidation discounts Tuesday at Pier 1 Imports in Kahului. The 20-year-old store will close its doors in about two months, along with the shuttering of all Pier 1 locations statewide.

Guillermo said other Hawaii store managers were surprised when the news about statewide closures came.

“We were like, ‘What?’ ” he said Tuesday. “We thought we were going to be in a good position. We do pretty well in Hawaii.”

“I think it’s just going to help save the company hopefully,” Guillermo said. “I hope it doesn’t go into bankruptcy.”

Shoppers Tuesday were befuddled when learning of the store’s liquidation, which had markdowns of up to 30 percent. 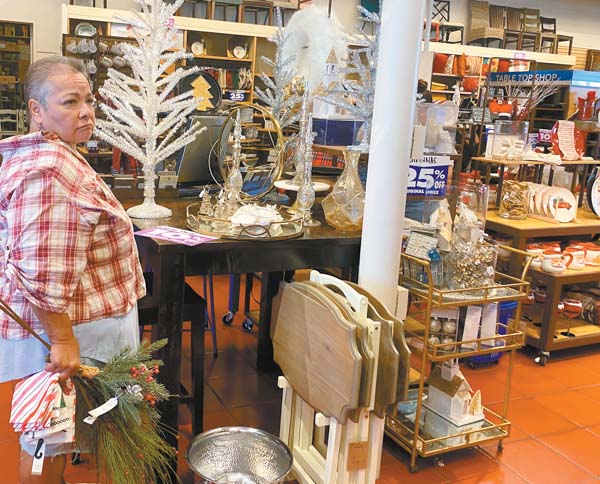 Rachel Chang of Kahului said decor is difficult to find on Maui, and Pier 1 Imports has been one of her go-to spots for unique finds. She was “depressed” by news of the store closure and joked about how the sadness made it difficult to shop.

“I was surprised,” said Eric Arbogast, owner of Cuatro Restaurant in Kihei. “I had no idea what was going on until I walked in just now.”

The Wailuku resident said that since his eatery opened a decade ago, he’s used Pier 1 candle votives, plates, glasses, bowls and other dishware because it’s “unique” and “not generic.”

“They have really cool stuff,” he said.

Debbie Walsh of Pukalani said she also was surprised but added that shopping is quickly evolving due to online purchasing.

“Who would have ever thought that stores would become obsolete but that’s where it’s heading,” she said. “It’s kind of scary.”

Longtime shopper Chang, a Kahului resident, said she was shocked and saddened about the news.

“Every year I get something new from Pier 1 — I guess next year it’s not going to happen,” she said. “I’m happy I’m getting things on sale, but I’m not happy they’re closing.”

The closure information about a week ago also came as a surprise at the Kahului store, which opened in October 1999 and currently has about 15 employees. Some staff members work once a month and many have five to six shifts per week, Guillermo said.

“There was a lot of disbelief,” he said. “Everyone thought we would move to a different location because of the status of Maui Marketplace — it’s a ghost town here. We didn’t think we would be affected by this raft of closures.”

Guillermo said Pier 1 employees “appreciate the community” and called frequent clients, such as interior designers, condo managers and restaurants owners, to share the sad news and encourage them to come in and get what they could.

Three inventory shipments still will come in and stock from the local warehouse will be sold as well, store officials said.

“I encourage everyone to come by at least once a week to check out the new promotionals and sales they’re pushing to get stuff out of the store,” Guillermo said. “Eventually, we will sell everything.”

The Maui News reached out to Pier 1 Imports corporate offices for information on Maui’s closure but received no reply Tuesday.