Randy Houser excited to be here, too 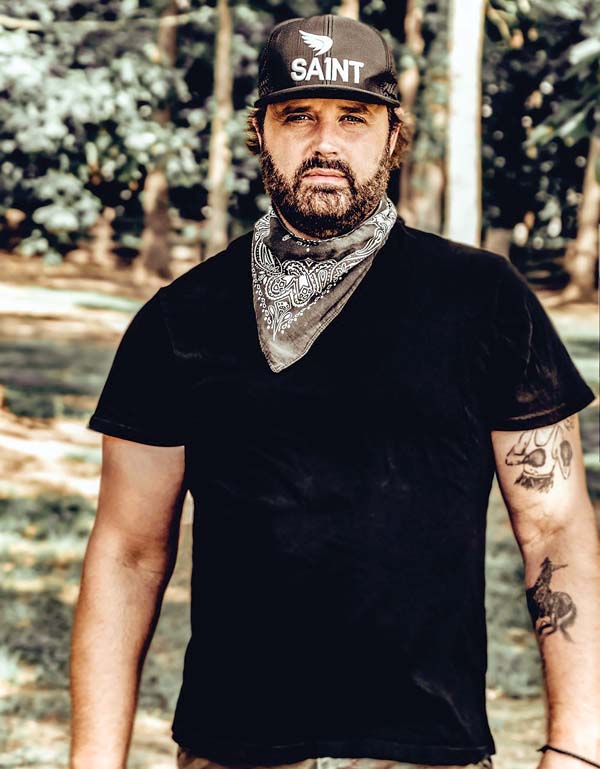 Headlining the Maui Songwriters Festival on Saturday, country star Miranda Lambert was just nominated for Grammy Awards for Best Country Song for “It All Comes Out in the Wash,” from her latest “Wildcard” album, and for Best Country Album for “Interstate Gospel,” as a member of the supergroup, the Pistol Annies.

“I’m excited about my new record,” Lambert enthuses. “I’m newly married and happy. I have a ‘Wildcard’ tour coming up in January, so I’m just living the dream.”

The most decorated artist in the history of the Academy of Country Music, Lambert’s “Wildcard,” was hailed as a “country rock masterpiece” by Rolling Stone magazine.

The Texas-born musician previewed a few songs before releasing “Wildcard” in November, including the Grammy-nominated “It All Comes Out in the Wash,” and the exuberant, hard rocking “Locomotive.”

“I had never made a record with Jay (producer Jay Joyce) before, but he’s played on a lot of my early stuff,” Lambert explained. “One day he texted me, ‘I think I know where ‘Locomotive’ needs to be, it needs to be a rock song.’ I said I’ll give it a whirl. We did it and it was really fun and it worked.” 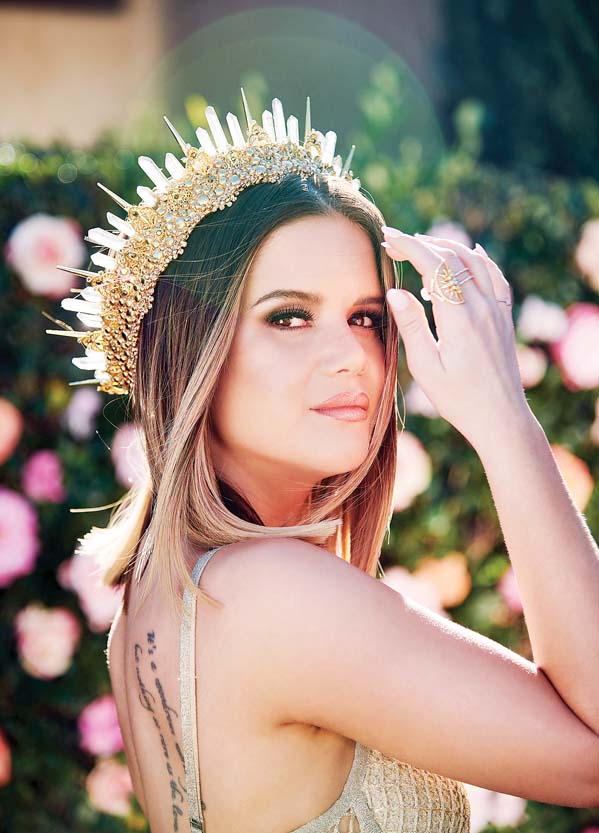 Miranda Lambert will be joined at the festival on Saturday by fellow star Maren Morris (above), who won Album of the Year at the 53rd CMA Awards in November. Morris was just nominated for a Grammy for Best Country Duo/Group Performance for “Common,” featuring Brandi Carlile, from her hit album “Girl.” JAMIE NELSON photo

Another earlier released track, the moving “Bluebird,” where she sings about keeping a light on in her soul and a bluebird in her heart, was co-written by Luke Dick (who will play at the festival) and Natalie Hemby. “Luke Dick had sent me some lyrics and he had read somewhere about keeping a bluebird in your heart and it really moved him,” she says. “So we wrote off that emotion. I love that song.”

Phenomenally successful, all six of Lambert’s previous studio albums have entered the charts at number one. Selling millions of albums and winning numerous awards, she has topped the country charts with memorable hits like “Mamas Broken Heart,” “Kerosene,” “The House That Built Me,” and “Gunpowder and Lead.”

Forming her first band at the age of 17, Lambert later competed in the talent show Nashville Star.

Over the years she’s recorded with a number of legendary artists including Dolly Parton, on a remake of “Dumb Blonde,” with the country icon in 2018.

“Dolly was my last bucket list that I hadn’t met,” she says. “When I got to meet her and record with her, it was like . . . she just sprinkles magic wherever she goes. Being in her presence, you feel like you’re learning so much by just talking to her.

Another highlight saw her teaming with John Fogerty on his classic “Wrote a Song for Everyone.”

And Willie Nelson? She sang with Willie on his hit album, “To All the Girls.”

“My defining moment in my career was singing with Willie and Kris Kristofferson for Merle Haggard at the Kennedy Centre Honors,” she says. “When people ask, what was your biggest highlight, I have to say that. If you’re from Texas, that makes sense.”

Lambert will be joined at the festival on Saturday by fellow star Maren Morris, who won Album of the Year at the 53rd CMA Awards in November. Morris was just nominated for a Grammy for Best Country Duo/Group Performance for “Common,” featuring Brandi Carlile, from her hit album “Girl.”

First playing the MACC in 2017, Morris is a member of the new female supergroup the Highwomen, whose brilliant debut album has been lauded as one of the best country records of 2019.

Lambert, who co-wrote a song on “The Highwomen” album, recently recorded with Morris and the other female artists from her recent Roadside Bars & Pink Guitars fall tour, on a rousing version of Elvin Bishop’s rock classic “Fooled Around and Fell in Love.”

“We wanted to a cut a song with all the girls on my Roadside Bars & Pink Guitars tour; there were six different artists plus the Pistol Annies,” she notes. “I was trying to think of what song would be right. I’m a huge fan of Rod Stewart’s version of the song and I thought that’s the one.”

She had just heard it played on Nashville’s Hippie Radio station. “If I have the radio on, that’s mostly what’s it on,” she says. “It’s great.”

Reached by phone in Austin, Texas, Randy Houser was about to head into the studio with one of his idols, Willie Nelson.

In early 2019, Houser released “Magnolia,” what many believe is his best album to date.

“With hints of Mississippi blues and distinct country swagger, ‘Magnolia’ further cements why Houser is deemed one of country music’s most esteemed vocalists,” praised Sounds Like Nashville. And Saving Country Music reported: “Randy Houser may have put out one of the best country records you’ll hear from a major label all year.”

“I wanted to make the best album I could,” he says. “It was important to be as creative as I could and reclaim my creative freedom without worrying about commercial success. The reviews have been great and it’s done well. I love the record.”

Gifted with a powerful, soulful, emotive voice, on songs like “No Good Place to Cry,” you could imagine a soul great like the late Otis Redding covering it. “Otis Redding was a big influence; I learned a lot from listening to Otis’ records,” he says.

Raised in Mississippi, from an early age, Houser felt destined to sing country. “From the time I was about five years old, I knew what I wanted to do. I knew I was going to make music. I’ve never really spent a minute on anything else.”

First charting with “Anything Goes,” in 2008, Houser’s albums have spawned a handful of No. 1 hits, platinum-selling song, and awards nominations, including the 2015 Country Music Association Song of the Year nomination.

Returning to the Maui Songwriters Festival, Hauser says he’s looking forward to “live aloha for a little bit and take it home. It’s just a fantastic experience. I think this is my fourth year and I love our hosts and sponsors. It’s like I have another home.”

Before the MACC concert, the festival will open tonight with a kickoff party at Fleetwood’s on Front St. with musician/song writers Bob DiPiero, Tim Nichols, Kassi Ashton and Kevin Griffin.

At the Fairmont Kea Lani on Friday, a ‘How I Wrote That Song” show features Morris, Nelson, Houser, Lynch, and Luke Dick.

“BMI is thrilled to bring the Maui Songwriter Festival back for the fifth year in a row,” says Nashville-based BMI executive Mason Hunter. “We are thrilled that Miranda, Maren and Randy Houser are all returning. Maui is such a special place and we love bringing writers to the island and visiting with BMI icons Willie Nelson and Kris Kristofferson. This is the best lineup yet and we look forward to making more memories.”

* Miranda Lambert headlines the fifth annual Maui Songwriters Festival at MACC’s Yokouchi Pavilion and A&B Amphitheater on Saturday at 5:30 p.m. Gates open at 4:30. Tickets are $49, $69, $89, $129, plus a limited number of $159 Gold Circle seats (plus applicable fees). Tickets at to www.mauiarts.org.

The “How I Wrote That Song” show is at the Fairmont Kea Lani on Friday at 7 p.m. General admission is $65 and tickets for VIP table seating are $145. Tickets at www.eventbrite.com.

A portion of festival proceeds will benefit the Dorvin and Betty Leis Charities, Inc., MACC, and the BMI Foundation.

Kit Okazaki Group was one of the winning carts at last year’s Pukalani Christmas Fair and Electric Golf Cart Parade.

Miranda Lambert will be joined at the festival on Saturday by fellow star Maren Morris (above), who won Album of the Year at the 53rd CMA Awards in November. Morris was just nominated for a Grammy for Best Country Duo/Group Performance for “Common,” featuring Brandi Carlile, from her hit album “Girl.” JAMIE NELSON photo

Pan-seared scallops are served on a skewer delicately placed on a small shot glass filled with a rich mushroom-flavored broth. AYA GANZ photo