Two-decade wait for the facility is over 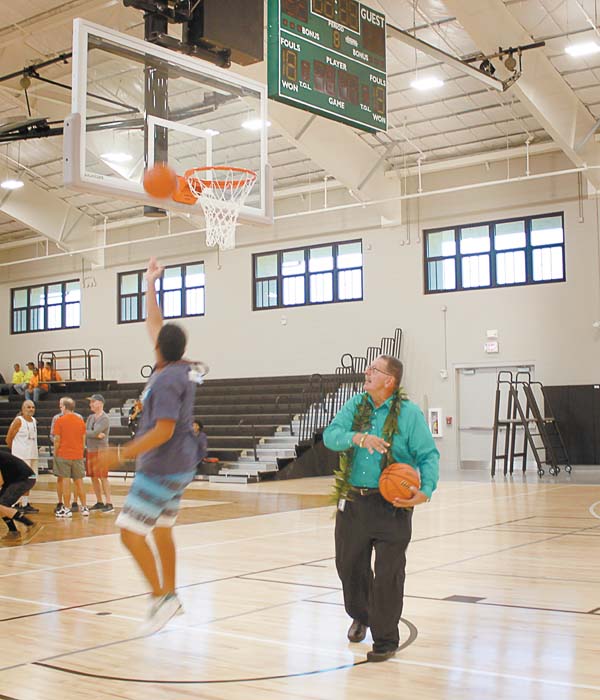 More than 100 people, including construction workers, county officials and students from Lokelani Intermediate School next door, attended the morning blessing of the $21 million gym, which also can double as hurricane shelter, on Liloa Drive in Kihei.

Maui County Parks Director Karla Peters said after the blessing that the department already is getting inquiries about having tournaments at the county’s newest gymnasium, which has two-full sized basketball/volleyball courts and can be configured as four cross courts with divider curtains.

The air-conditioned gym also may accommodate activities from nearby South Maui schools, community leagues and the parks department recreational programs day and night.

Lokelani Intermediate faculty and students were excited about their new next-door neighbor. 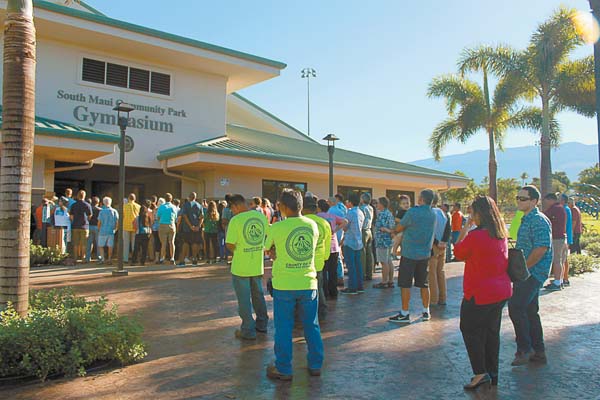 A blessing and grand opening of the South Maui Community Park Gymnasium was held Monday. More than 100 county officials, workers, students, construction workers and guests gathered for the event.

“It’s going to be great to play in a facility without the heat and unexpected weather conditions,” said Gary Hall, a deaf education teacher, who also coaches basketball at Lokelani Intermediate.

There are 44 girls and boys in the school’s basketball program, a handful of whom witnessed the blessing. Hall said the school still had to go through the application progress to play at the new gym.

“It’s nice,” said 8th grader Erinrose Salacup as she and others shot hoops after the blessing. She liked playing indoors rather than outdoors.

Hearing the sounds of basketballs bouncing and children playing is exactly what Peters had hoped for, to see the gym “come to life.”

As capital improvements project coordinator for the parks department years ago, Peters said she saw sketches for the gym in 2004. It started off smaller and transformed over the years into the 31,858-square-foot floor area blessed Monday.

“I was lost for words,” Peters said after the blessing. “This is a dream come true, waiting all these years and seeing it come to life.”

The gym has main court bleacher seating for 718 people and secondary court bleacher seating for 322 people. It comes with a wireless sound and public address system with assisted listening devices. It has high school and NCAA regulation basketball court markings. There also are two offices for parks department staff, three separate public meeting rooms and one concession area.

On the outside, the gym has 408 panels generating 100 kilowatts of rooftop solar power; 170 parking stalls and sites to accommodate food trucks. The irrigation system uses treated water from the sewage plant.

The gym has the largest court space in the county system, said Maui County Communications Director Brian Perry. The project’s consultant was Nishikawa Architects, which got the $701,000 contract, and contractor, Blazy Construction Inc., which won the $20.7 million contract.

“This gym is a really shining star for Maui County,” said Maui County Mayor Michael Victorino during the blessing.

The mayor noted that the gym can accommodate 3,805 people as an emergency shelter and can withstand Category 3 hurricane winds — a maximum of 129 mph.

“This is the first gym ever built in South Maui,” he said. “You deserve it, it’s long overdue.”

County Council Member Riki Hokama, chairman of the council Healthy Families and Communities Committee, said he remembers a council resolution for the gym 20 years ago and the council members holding the South Maui residency seat who promoted the gym, including Wayne Nishiki, Michelle Anderson, Don Couch and Kelly King, who currently holds the seat.

The gym will be closed every Tuesday until 4:30 p.m. for maintenance, Peters added.

Beginning today, the parks department opened up application requests for the South Maui Community Park Gymnasium for its winter/spring season. Applications will be accepted from 8 a.m. today until 4 p.m. Friday.

The limited tri-annual process is for use of the gym from Jan. 1 to April 15. The process will address requests for use of the new gym only and will not allow for the expansion, retraction or cancellation of any existing permits for other county parks facilities.

All league and recreational use requests for the new gym will be accepted at the main parks department office at the War Memorial Complex and at the South Maui permit office at Kihei Community Center. Complete applications also may be emailed to DPRpermits@mauicounty.gov.

Those who miss Friday’s deadline may submit standard permit applications for the new gym on a first-come, first-served basis, beginning Jan. 2, space permitting.

Reservations for meeting rooms and special events at the gym from Jan. 2 to April will be accepted beginning Jan. 2. Due to the anticipated volume during the initial first-come, first-served period for the new facility, all applications will be accepted and processed at the parks department’s main office at the War Memorial Complex only from Jan. 2 to 10.

Beginning Jan. 13, applications for the facility will be accepted at all permit offices countywide for the same uses and reservation periods.

Application request packets may be found at www.mauicounty.gov/parks. For more information, call the Department of Parks and Recreation permit office at 270-7389 or email DPRPermits@mauicounty.gov.