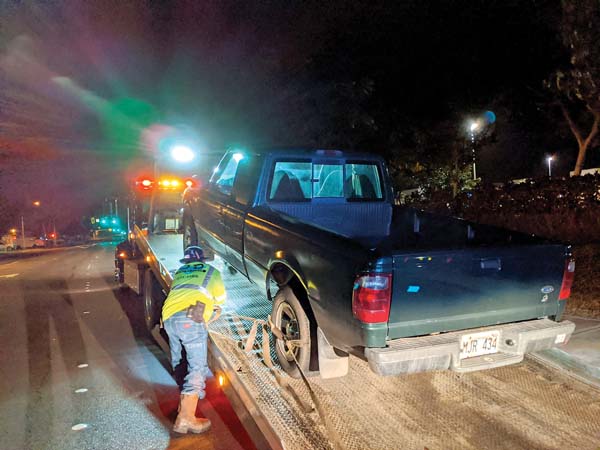 A D&D Towing employee secures a pickup truck before it’s towed away after the driver was arrested for drunken driving early Saturday on Hookele Street in Kahului. The truck was the second vehicle to be towed after police began enforcing a new Maui County law allowing police to tow vehicles of people arrested for impaired driving. The Maui News / LILA FUJIMOTO photos

KAHULUI — A green pickup truck stops over the crosswalk at a red light on Puunene Avenue, catching the eye of DUI Task Force Sgt. Nick Krau, who makes a U-turn to follow the vehicle.

The truck weaves out of its lane as it turns onto Hookele Street before Krau activates the blue lights on his unmarked police vehicle to pull over the truck shortly after 2 a.m. Saturday.

When the driver is unsteady on his feet during field sobriety testing and a preliminary breath test shows he’s over the legal alcohol limit of 0.08 percent, the 48-year-old Kahului man is arrested and led away in handcuffs. His passengers, one in the front seat and another in the truck bed, run across the street to Zippy’s restaurant before a tow truck arrives to haul away the pickup truck.

“This is great,” Krau says. “For the owner of the vehicle, it’s not being left here where it could be vandalized or damaged or even stolen, which we’ve seen before. It’s going to a safe and secure location, and it’s good for the community because it’s not going to be driven by anyone else tonight.

“The passengers were also drinking, so no one’s tempted to drive it now.” 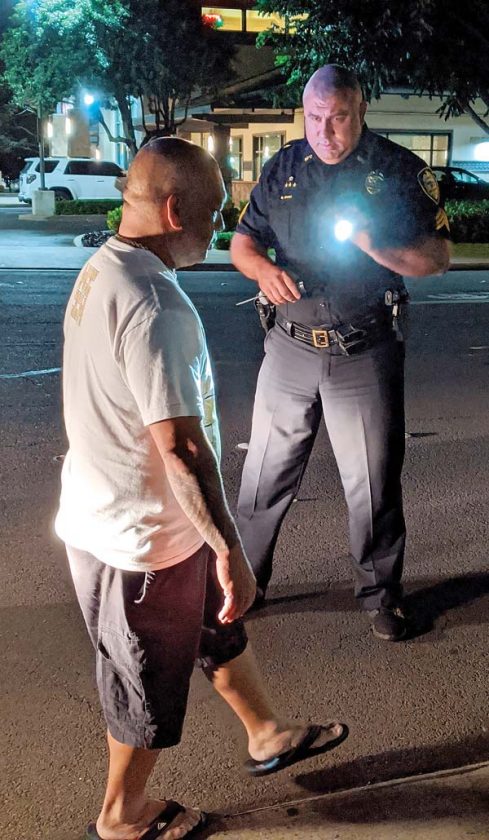 DUI Task Force Sgt. Nick Krau conducts field sobriety testing on a driver stopped for suspicion of drunken driving shortly after 2 a.m. Saturday on Hookele Street across from Zippy’s restaurant in Kahului. The 48-year-old Kahului man had his pickup truck towed after he was arrested for driving under the influence of alcohol and driving without a license.

The truck was the second vehicle towed under a new Maui County law allowing police to tow vehicles of drivers arrested for driving under the influence of alcohol or drugs.

On Dec. 20, the Maui County Council passed the DUI towing bill and Mayor Michael Victorino signed it into law. Proposed in the wake of several fatal drunken-driving collisions last year, the law is aimed at deterring impaired driving.

The registered owner of a towed vehicle is responsible for paying the towing and storage fees, which could be in the range of $300 to $600, police said.

After training officers, police started implementing the law Friday night, with the first vehicle towed in Lahaina after a DUI arrest at about 12:30 a.m. Saturday.

DUI Task Force officers also made two impaired driving arrests in Wailuku early Saturday. Those two vehicles weren’t towed because they were turned over to sober passengers who could legally drive the vehicles, said Lt. William Hankins, commander of the police Traffic Section. 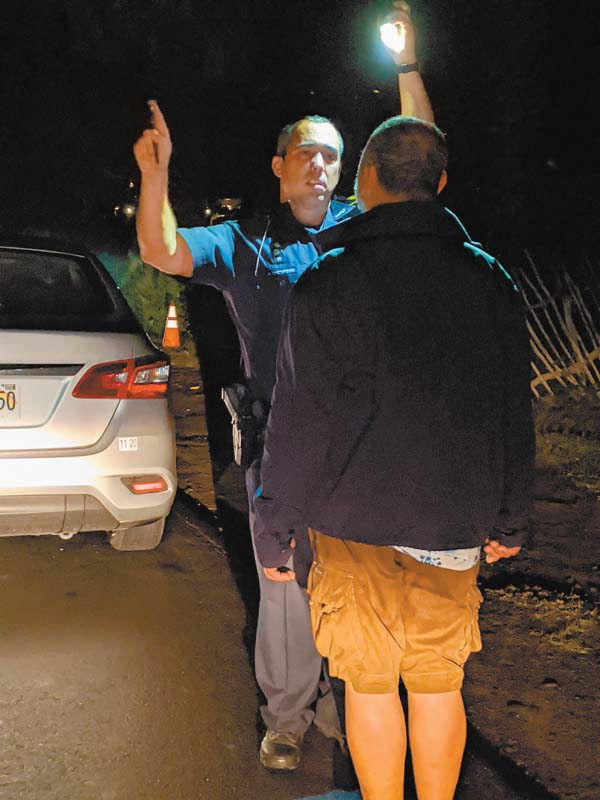 DUI Task Force Officer Jason Thompson administers a field sobriety test on a driver Friday night, as officers began implementing a new Maui County law that allows police to tow vehicles of those arrested for driving under the influence of an intoxicant.

He said police made eight arrests for driving under the influence of an intoxicant over the weekend and towed five vehicles.

As of Sunday, police made 39 impaired-driving arrests this year.

Hankins said it was rare for impaired drivers to have sober passengers in their vehicles.

“It just shows how alcohol affects judgment,” he said. “I’m sure the drivers ‘felt’ they were ‘OK’ to drive.

“If you have a passenger who hasn’t been drinking, then that is the person who should be driving. People understand drinking and driving is unacceptable. Now we need to change the behavior.”

On Friday night, officers encountered people who knew about the DUI towing law, including the passengers in the pickup truck towed in Kahului. “I lost my brother-in-law to drunk driving,” one passenger told Krau. “You just doing your job.”

Before the towing law was enacted, police officers would move vehicles of impaired drivers to a legal parking area, sometimes on the side of the highway, after a DUI arrest, Krau said.

Now, towing the vehicles will prevent drivers “from bailing out and going straight back into their cars, which they often do,” said DUI Task Force officer Jason Thompson.

“It’s another tool in our toolbox,” said Thompson, a 10-year police veteran who has been part of the DUI Task Force for the past year and a half.

On Friday evening, after a downpour in Central Maui, Thompson tests his laser speed gun before he heads out to Kihei.

“We’re looking for DUIs, but I’ll do speed enforcement, too,” he says. “If they happen to be drunk, then they’re coming with us.”

Driving on Honoapiilani Highway past Waikapu, Thompson scans the road for “something out of the ordinary.”

It could be a driver going too slow or too fast.

“When I see something that doesn’t look quite right, that’s a cue for me to pay attention,” he says. “And that’s where my investigation starts.”

Before long, he sees a car ahead going into the oncoming lane before pulling back into traffic. The car, which is a couple of vehicles ahead of Thompson’s unmarked police car, also has its lights off.

As the road widens at Kuihelani Highway, Thompson pulls over the car and talks to the driver before determining he isn’t impaired but had just turned on a podcast.

Thompson recalls how he was sure he was stopping an impaired driver when he saw a car weaving on Main Street in Wailuku at about 2 one morning.

When he approached the car, the woman driving quickly said, “I wasn’t touching it.”

In the car, she had three cellphones with wire chargers set up on a little stand. Pokeman Go was running on all three phones.

“I said you must be watching them because you’re going all over the road,” Thompson recalled.

Since joining the DUI Task Force, Thompson says he has learned to smell the alcohol on an impaired driver.

In the early evening, officers often will encounter drivers leaving the beach after drinking, Thompson says. But with the rain Friday afternoon, many people stayed home and traffic is light.

On North Kihei Road, after seeing a sedan travel off the roadway four times, Thompson stops the car. He turns off the flashing blue lights of his police car so they won’t interfere as he conducts field sobriety testing on the driver, who just left Maalaea Small Boat Harbor after having one drink on a cruise.

The driver, who admits to having trouble with night vision, is sent on his way after Thompson determines he isn’t impaired.

Observing driving patterns as they follow vehicles on Piilani and Maui Veterans highways, Thompson and fellow DUI Task Force officer Stephen Kelly stop a couple of drivers who are weaving on the road and turn out to be tired after working long shifts.

It’s after 11 p.m. when a caller reports that a sport utility vehicle is swerving and unable to stay in its lane on Honoapiilani Highway near Maalaea. The vehicle has turned onto Kuihelani Highway, with the caller following with lights flashing, when Thompson, Kelly and DUI Task Force officer Caleb Guarriello converge in the area and pull over the vehicle.

The officers talk to the driver, who turns out to be “tired,” but not impaired.

Kelly, who has been on the DUI Task Force for a year-and-a-half, has the highest number of DUI arrests, as well as “a lot of experience,” Thompson said.

After working as a K-9 handler in Germany for 15 years, Kelly was a police officer in Alaska for six years, even appearing in an episode of “Deadliest Catch.”

Kelly said he made a lot of DUI arrests in Alaska before joining the Maui Police Department seven years ago. “I promised myself not go to on the DUI Task Force because you get burned out,” he said.

But then, “I started pulling over a lot of drunks,” he said.

He decided to apply to the task force “so I could concentrate fully on impaired drivers,” Kelly said.

In one case, Kelly stopped a driver after he ran a light a good 30 seconds after it had turned red.

The driver’s speech was slurred, even though he said, “I only had one beer.”

When he stepped out of the car, the driver’s eyes weren’t focusing, Kelly said. After he explained the walk-and-turn test, the driver was leaning to the left and would fall.

“It didn’t make any sense. He got worse and worse,” said Kelly, who decided, “this cannot be alcohol-related.”

Even though the man said he felt fine, Kelly said he didn’t feel comfortable leaving the man and called medics. They did tests and determined the man was having a stroke.

“Someone else could have said, ‘Terrible driving pattern; smells like liquor,’ ” Thompson said. “Definitely, our training helps.”

After midnight, the DUI Task Force officers are back in Wailuku, passing streets near bars that are still open in the early-morning hours Saturday.

After Krau stops the driver in Kahului, Guarriello arrests an impaired driver on Lower Main Street in Wailuku.

“I see the difference this makes,” Thompson says. “I see what happens when we don’t find those drunk drivers. We go to fatal crashes. You see the ones we miss. They show up in fatalities.”

Krau said the DUI Task Force “is an outstanding team of professionals, eager to serve and dedicated to our community and public safety.”

“They work extremely hard all night long and on holidays to make a difference,” Krau said. “But we can’t stop impaired driving with enforcement alone. We need the support of our community, and we need laws that evolve and change to keep up with current trends and scientific research.”

Police are supporting a bill before the state Legislature that would lower the illegal alcohol limit from 0.08 percent to 0.05 percent.

He said that in 1983, Utah was one of the first states to lower its illegal blood-alcohol level from 0.10 to 0.08 percent, with all other states following. Research showed the lowering of the blood-alcohol limit resulted in a 10.4 percent reduction in alcohol-related traffic deaths from 1983 to 2014, Krau said.

In January 2019, Utah became the first state to lower its legal blood-alcohol limit again, to 0.05 percent.

“Preliminary statistics from Utah show that this change in their law is reducing alcohol-related crashes and saving lives,” Krau said.

He said the lower limit wouldn’t necessarily result in more DUI arrests, but “has a broad deterrent effect because it helps prevent drivers from getting behind the wheel in the first place.”

“So it is an effective intervention for preventing driving at both high and low blood-alcohol content levels,” he said. “Intoxicated drivers exhibit other risky behaviors, such as not wearing their seat belts and speeding, which further increase their risk of injury and causing a collision.”

Mess Attendant 2nd Class Doris Miller was recognized for manning a machine gun on the USS West Virginia and returning fire against Japanese planes during the Dec. 7, 1941, attack on Pearl Harbor. He was the first African American to receive the Navy Cross for valor. US Navy photo