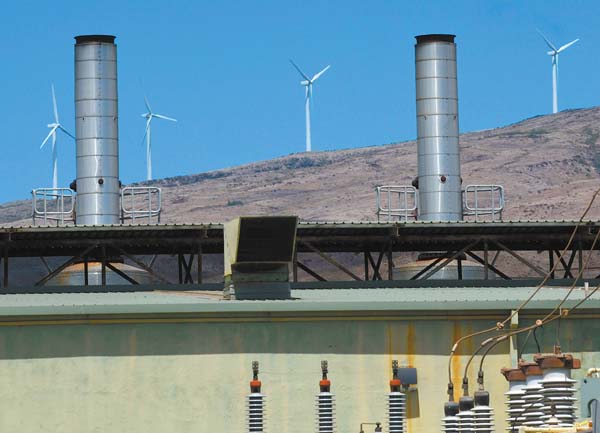 Kaheawa wind farm turbines in the distance are framed by Maalaea Power Plant stacks in this photo taken July 31. The Hawaii Supreme Court ruled Tuesday that Maui County cannot include the value of the wind turbines in assessing the property for taxes. The Maui News / MATTHEW THAYER photo

The Hawaii Supreme Court said Tuesday that Maui County did not have the power to include wind turbines as “real property” when it taxed major wind farms on Maui.

The court upheld an earlier decision by the Tax Appeal Court that the county exceeded its authority under the Hawaii Constitution when it changed its rules to allow wind turbines to be assessed for real property taxes – shortly after an appeals court had decided that wind turbines should not count as real property.

Taxing the wind turbines would’ve brought in millions more for the county, but it also could’ve put the county on a slippery slope in deciding what should count when determining property’s taxes, according to the Tax Appeal Court.

Kaheawa is leasing state land, while Auwahi is leasing from Ulupalakua Ranch.

Around 2012, Kaheawa challenged the county’s authority under the Maui County Code to include the value of its wind turbines within real property tax assessments for the 2007-11 tax years, according to court documents.

Auwahi wasn’t originally part of the Kaheawa litigation. However, after the Intermediate Court of Appeals decision, Auwahi came to an agreement with the county that Auwahi’s wind turbines were not real property under Maui County Code for the 2013 tax year.

However, in 2013, the county amended the code to explicitly include wind turbines, as well as other articles that would “increase the value” of the underlying land. Under the new rules, the county again began including the value of Kaheawa’s and Auwahi’s wind turbines within their real property tax assessments from 2014 to 2016.

The wind farms again challenged the county, saying that the county went beyond its authority in making the change, which had a huge impact on their taxes.

The Tax Appeal Court issued judgments in favor of the wind farms, after finding that “delegates to the 1978 Constitutional Convention had never intended to grant the counties the power to redefine the term ‘real property’ to include ‘personal property.’ ”

If the counties were given this power, “then there may be no end to what the counties will ultimately do with respect to taxing chattel that are located upon real property,” the court said.

Maui County appealed the decision, arguing that the constitution did in fact give the county this power. The county also disputed the method that the Intermediate Court of Appeals used to determine that the wind turbines were not “improvements” or “fixtures.” Wind turbines, the county argued, should be considered real property because they were permanent, and their removal would damage the land.

The case made its way to the Hawaii Supreme Court, which said in an opinion issued Tuesday that while the counties have broad policy-making authority based on past cases, “we cannot conclude in this case that this authority extends as far as the county claims.”

“The counties’ taxation authority cannot extend beyond ‘real property,’ the definition of which is currently set by the Legislature, nor can it impact any authority the constitution expressly reserved to the state,” the court said.

The 2013 amendment to the County Code “does both and thus runs afoul of the state constitution.”

Maui County spokesman Brian Perry said Tuesday that the county “is reviewing the decision and has no further comment at this time.” Perry could not say whether the county would have to reimburse the wind farms.

Meanwhile, Tom Yamachika, president of the Tax Foundation of Hawaii, applauded the decision.

Yamachika explained that after the 1978 Constitutional Convention, the counties were given the right to tax real property and had to follow the same definitions and exemptions of the state for 10 years. After that, they were allowed the freedom to set their own rates and exemptions. However, what the counties can’t do is expand the state’s definition of real property, Yamachika said.

“If they want to make the definition narrower and tax fewer things, that’s fine,” he explained. “But they can’t broaden the definition and tax stuff that’s not real property, which is what (Maui County) did.”

Yamachika said including a home in real property taxes is different from including wind turbines.

“Homes are considered to be fixtures, and they’re assessed when it comes to real property,” he said. “But processed machinery isn’t, because the processed machinery really isn’t helping the owner of the land use the land. It’s helping the owner of the land conduct some kind of business, which may have nothing to do with the land.”

And, if Maui County were allowed to include wind turbines because they add value to the land, they could conceivably go to a factory and include the machinery or to a medical clinic and include an MRI machine, for example.

“You could go into any kind of place with production machinery, or something that’s large and valuable, and say, ‘Hey, you know, that’s part of the realty . . . so we’re going to tax it.’

“It could’ve completely changed the landscape.”