Most council members were not informed of the $8,000 project

Covert cameras without audio capabilities were active briefly in Council Chambers in the county building late last year, according to council officials. Council members, who learned about the project after its purchase and installation, are saying the secret cameras should’ve been made known to all council members and not just the former chairwoman. -- The Maui News / KEHAULANI CERIZO photo

WAILUKU — An $8,000 project to install covert security cameras in the Council Chambers of the county building in order to monitor an active shooter or hostage situation was kept secret from most council members and the public, county officials said.

However, then-Council Chairwoman Kelly King, who authorized the purchase order and was the sole member to have prior knowledge of the camera project, said Thursday that she was following recommendations from the Office of the County Clerk and the Office of Corporation Counsel’s Risk Management Division to assist law enforcement.

“The reason why I didn’t talk about it was because no one was supposed to know,” King said. “In a case that something happened, cameras would be first the thing shooters would take out.”

Current Chairwoman Alice Lee, King’s successor, said Thursday that “the rest of the council members were not aware of any of this.” The council as a whole now will decide what to do with the inactive cameras, she added. 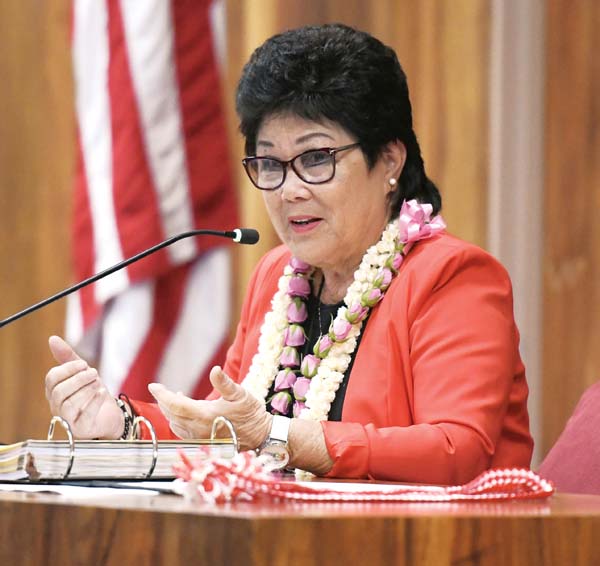 A Security Resources Pacific Inc. worker familiar with the county project, who requested anonymity due to job concerns, said Thursday that the cameras record video only — and not audio.

A purchase order of $6,931.31 was authorized by King on June 27, according to county documents. The remaining balance of $901.86 was signed Dec. 30 by Lee, who was voted to lead the council Dec. 27 after King announced her resignation the week before.

Images from the cameras were intended to link to the Office of Council Services or the Clerk’s Office, according to Lee. Instead, the server was installed in Chairwoman King’s office in late November or early December.

Lee said then-County Clerk Josiah Nishita disconnected it after a few days because he believed the rest of the council needed to be aware of the cameras. 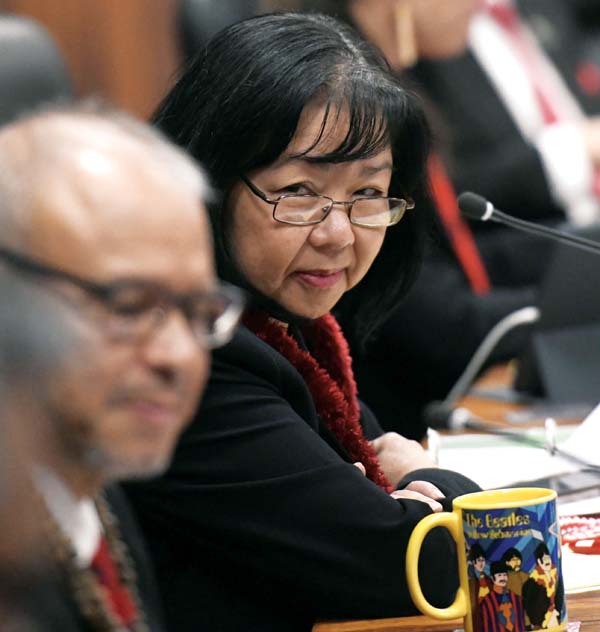 “You could tell there was a rift between the clerk and the council chair when he . . . removed the server from her office,” Lee said.

Nishita resigned last month to become deputy managing director and is assisting temporarily in the Clerk’s Office while a replacement is sought. He was not in the office and not available for comment Thursday or Friday.

Lee said that when a transaction is involved, such as with the covert cameras, all council members should be informed.

“When there’s an expense, the council needed to know, and this isn’t cheap,” she said.

Although Lee said she still is learning about “Project: Covert Council Floor CCTV,” which has not been discussed officially in the council, she did not believe the plan involved malice or deceit.

“I don’t think there was any malicious intent,” Lee said. “I honestly don’t think it started out that way. I just feel that it was a bit disorganized to begin with, and as the project progressed, it appeared there was some disagreement between the county Clerk’s Office and the chair’s office and that amplified over time and then it ended up where the server, which should have been in the Clerk’s Office or OCS office, ended up in the chair’s office, which to me is highly unusual.

“Somewhere along the line, IT and probably the Police Department weren’t made aware of all the changes. So I think this all contributed to a huge misunderstanding.”

Lee added that council member discussions for eighth floor security cameras date back to 2014 and 2015.

King said the covert camera project wasn’t her idea and that she was following the recommendation of the Clerk’s Office, who received information from the Risk Management Division.

“It wasn’t my idea,” she said. “I was supporting Risk Management.”

The Risk Management Division, which falls under the mayoral administration, oversees employee health and safety and plans and implements countywide policies and programs to manage risk and control accidental losses.

“However, the cameras are not connected to the countywide network and run separately under the council’s own network,” he said. “The Risk Management Division, which manages security cameras throughout the county building, does not have access to the council’s new network.”

Sugidono said he doesn’t believe the council had a separate security camera network prior to the installation of the new cameras.

King and her executive assistant, Michelle Del Rosario, said the council chairwoman was out of town at the time of installation, which was directed by the vendor and the Risk Management Division.

The vendor said, “It’s coming in this office where do you want it?” Del Rosario said, adding that she pointed to a corner in King’s office.

King emphasized that the cameras were installed for a short time and only turned on once.

Despite following recommendations from the Clerk’s Office and Risk Management Division, King said Nishita told her “the council members think you’re spying on them.”

When asked why she didn’t inform other council members, King said Nishita had told her not to.

“I was told not to by the Clerk’s Office,” she said. “He was explaining to me the whole project. His exact words were ‘No one’s supposed to know.’ ”

Del Rosario said that the Risk Management Division “told us not to disclose.”

“Had any of the council members called our office or walked in the office — not one of them called or emailed to say they heard rumors (of the cameras) — we would have called Risk Management and asked for them to meet with us and the member,” Del Rosario said Thursday night.

On Friday, Sugidono said the Risk Management Division would not comment on whether it recommended the cameras be kept a secret from other council members. He did say that the division consults with county departments, as well as the council, on a “number of safety and security issues within county facilities.”

“The division’s chief concern when dealing with scenarios such as active shooter situations, are for the protection of human life,” Sugidono said. “However, the decisions and actions on specific projects or initiatives are ultimately made by the administration and the council.”

“We are part of a team; we are part of the group,” Sugimura said Thursday. “We need to know what’s going on and why. . . . People need to know you come in here, and public security is top priority. If cameras were installed for that reason, we needed to be informed and not just hear rumors.”

Molina and Sugimura said constituents have been asking them about the cameras.

“I had heard from members of the public who were concerned about the cameras purchased, installed and turned on for a period of time without council members and the public being aware,” Molina said Wednesday. “For the sake of transparency and in hindsight, maybe a council chair’s meeting, which is open to the public, should’ve been called to inform the members that cameras were purchased along with amount spent and when the cameras should be operational. At the very least, maybe a memo should’ve come from the chair’s office so council members should have been aware.”

Social media also sparked discussions over the cameras. In a recent Facebook post, Del Rosario refuted claims of audio capabilities for the cameras and said that the Maui Police Department would have exclusive use of the cameras in the “event of a takeover of the Council Chambers.”

Maui Police Department acting Lt. John Sang on Thursday said the department has “no reaction” to a question about MPD’s involvement in the project.

King added that people who went on “vicious attacks” online didn’t bother to deal directly with her office.

“I try to deal with real time and real information,” she said. “I’m always happy to share information.”

King said that the Risk Management Division must balance many variables when dealing with public safety.

“I think it’s difficult for Risk Management to deal with these issues — on one hand they wanted to keep it secret to have potential benefit for police action. On the other hand, the public’s right to know kind of escalates if they don’t know what’s going on; it gets blown up.”

King said despite misinformation in the media and online, she remains focused on her work to serve the public.

Lee said that moving forward, the council may look at returning the equipment or see if other departments with technical staffing able to monitor cameras would use the equipment.

“We’re going to deal with any and all issues in a chair’s meeting so that planning and decision-making will be shared,” Lee said. “There will be no secrets amongst the council members.

“There’s no need to have covert this and covert that.”

Pools to reopen with reservations only