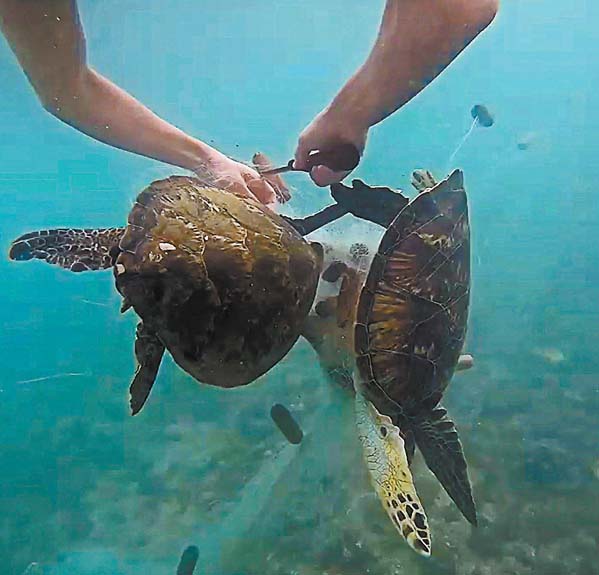 Thirty-three fewer sea turtles were found stranded on Maui last year than in 2018, though most of the incidents continue to be related to fishing gear, especially nets, according to the Maui Ocean Center Marine Institute.

A total of 141 sea turtles were documented as stranded on Maui last year, down from 174 in 2018, according to a report by the institute.

“We hope to raise awareness, especially for fisherman, this is (where) the most of our strandings are caused, by fishing interactions,” said Jennifer Martin, conservation programs coordinator for the Maui Ocean Center Marine Institute, a nonprofit organization that coordinates response to sick, injured, distressed or expired sea turtles on Maui.

The institute is the nonprofit arm of the Maui Ocean Center aquarium. Martin said the organization wants fishers to know it’s OK to help turtles that may be stuck with hooks and lines and to cut off as much fishing lines as possible, as well as take the hooks off.

She is also seeing more turtles getting stuck in illegal nets. 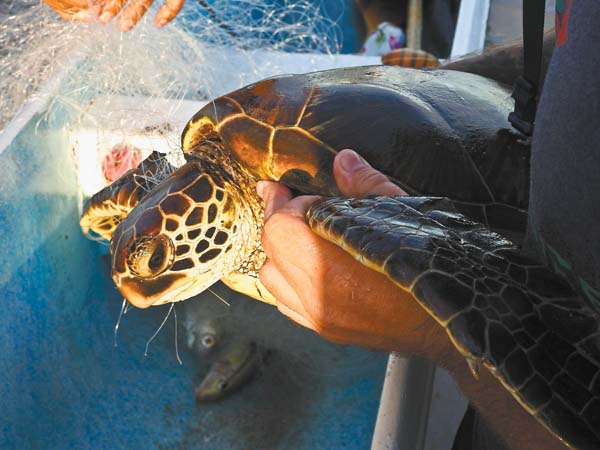 A green sea turtle is tangled in a braided fishing line in 2019.

Because the lines are clear, the turtles tend to get their flippers or heads stuck in the lines, she said.

The organization also has a Fishing Line Recycling Program that involves people dumping their unwanted fishing lines into designated recycling bins, which are installed at 26 high-traffic locations along Maui’s shoreline, harbors and boat ramps.

Fishing line collected from the bins is measured and recorded. The lines are then shipped to Berkley Conservation Institute, where they are melted down and made into fish habitat structures and other repurposed equipment, the Marine Institute’s report said.

Although stranding numbers are down by around 30 turtles, Martin said it is hard to make a determination if indeed there are fewer turtle strandings, as people may be more aware in some years than in others.

It’s possible that the strandings could be the same for both years, but it won’t be reported unless someone sees the turtles and reports the strandings.

“It all depends what people see out there,” said Martin, whose agency receives the stranding calls and works in partnership with the National Oceanic and Atmospheric Administration or NOAA Fisheries.

Of the 141 turtles stranded last year, 117 were located alive.

The 2019 report is the first official and detailed report the nonprofit has put together, Martin said.

Last year, 102 green sea turtles stranded because of fishing gear, while 13 turtles stranded due to unknown causes and the rest were caused by a handful of boat strikes, buoyancy disorders, injured flippers, shark bites, diseases or getting stuck in rocks or sand.

Two hawksbills turtles were stranded, one due to a boat strike and another to fishing gear.

Last year there was also an olive ridley turtle that got stranded by fishing gear.

Martin said that finding the olive ridley turtle was unique, as normally these turtles are more in the open ocean, and people don’t see them as frequently.

This particular olive ridley was stuck in a net and found by fishermen farther out at sea.

Most of the strandings — 75 — were in South Maui, which covers La Perouse Bay to McGregor Point.

Martin said this is due to South Maui having more “baskers,” or turtles that may take advantage of the less routh terrain to lie out on the beach.

The stranding reports may also be higher in South Maui due to more beachgoers in these areas, Martin said.

While all calls are helpful, Martin reminded people that turtles may sleep and relax at the beach for hours.

She noted that people can tell if turtles are just relaxing if they see the turtles blinking or having at least some type of movement every now and then.