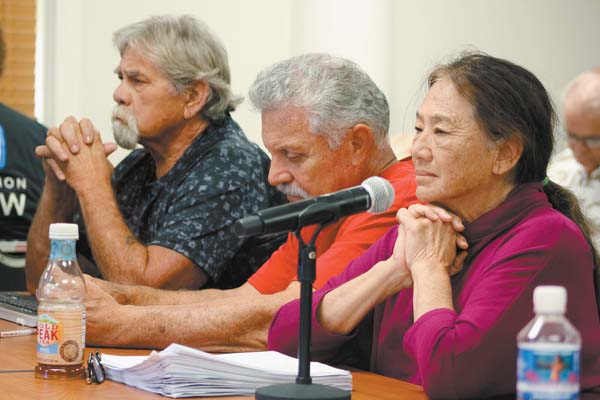 WAILUKU — Three community groups advocating for the protection of ancient burials have been granted a request to intervene in the Grand Wailea Maui’s plans to build 151 rooms, add another floor of parking and make other improvements.

The Maui Planning Commission voted 7-0 Tuesday to grant a petition to intervene by Malama Kakanilua, Pele Defense Fund and Ho`oponopono O Makena. The hotel and the groups now will go to mediation; if they can’t come to an agreement, they will move on to a contested case.

The decision puts a hold on Grand Wailea’s expansion plans, which have evolved in recent months after the hotel ran into public opposition at a planning commission meeting on May 28.

Originally calling for 224 more guest rooms, up to 40 bungalow units, two more parking levels with 316 additional parking stalls and the removal of the Seaside Chapel, among other changes, the Grand Wailea later scaled back its proposal in September. The 776-room resort is now asking to build 151 more rooms and one more parking level with 158 additional stalls. It also removed the bungalows, decided to keep the chapel and agreed to complete a new archaeological monitoring plan.

Other proposed improvements include expansion of the Spa Grande, conversion of existing pools and construction of two new ones, paving of a beach access parking lot and installation of artificial turf on the luau grounds.

During the meeting in May, testifiers expressed concerns over growing tourism and further desecration of iwi kupuna. On June 28, the three groups — which include lineal descendants and cultural practitioners of the area — filed a petition to intervene. They said they didn’t want to see any more digging on a property where more than 200 remains have been disturbed and reburied in the past.

“Our latest and most recent goal is to see that known burial areas do not get built upon, and this is just that,” said Clare Apana, president of Malama Kakanilua. “What has happened to our burials is just egregious. It is not necessarily the fault of the present owners. It’s just the way they did things then. It is the fault of a system that looks at our burials as nothing, as part of a commodity.”

Ashford Kaleolani DeLima, president of Ho`oponopono O Makena, is a lineal descendant of Makena and grew up there. He said he has iwi kupuna buried from Ulupalakua to Makena.

“I’m very concerned about the land in general,” DeLima said. “The ocean and what is happening from the ’50s till today, and there’s a big change. You can see the change on the land, but majority of the people don’t know what’s going on in the ocean.”

Palikapu Dedman, president of the Pele Defense Fund, criticized the treatment of Native Hawaiians and the proliferation of hotels on known burial grounds.

“You sitting here listening to people talking about bones like numbers — 300 here, 200 there,” Dedman said. “You are all part of guilt by association when I look at the whole Kaanapali. It all came from planning commissions. And how many thousands of bodies did they dig up?”

Apana also explained the timing of the petition, which was supposed to be filed 10 days prior to the May 28 meeting but instead was filed a month later. She said that she noticed there were no comments from the State Historic Preservation Division on the project at the time of the May 28 meeting and had asked about it for several weeks afterwards. She also had concerns about the description of risks to iwi kupuna in the planner’s report before finally deciding to intervene.

Grand Wailea did not oppose the groups’ request. Attorney William Meheula said they had shown “good cause” and also didn’t object to the late filing. Meheula said he recognized the state’s policy of “wanting issues to be resolved on the merits versus just a technicality.”

Meheula also explained that a special management area permit for the Grand Wailea had been granted in 2012 but expired in 2015. After BRE Iconic Holdings purchased the hotel from GWR Wailea Property for a reported $1.1 billion in 2018, the new owners reduced the original proposal of 310 new rooms to 224. He said they later put together the 151-room plan and took out anything that approached areas where burials have previously been found.

“Most of the areas here that we’re talking about, this proposal, it’s bedrock after 1 foot,” Meheula said. “Not your typical iwi burying area.”

Meheula added that the hotel had met with the groups three times — Aug. 29, Oct. 11 and Jan. 12 — and offered up the new scaled-back plan (though members of the groups later said they were never properly informed). Meheula said that the hotel is “cutting back to the point where we don’t think there’s much risk at all.”

Commissioner Keaka Robinson said he was “not a big supporter of intervention” but would vote for it anyway, saying the situation goes beyond iwi.

“I see new owners come in for these big developments, and they’re the second, third, fourth owners,” Robinson said. “And this one thinks, ‘OK, we’ll come in, and we’ll do it differently because we’ll be a little more better, we’ll be a little more pono.’ And they always come with good intentions. But some projects just shouldn’t be done.”

The commission unanimously agreed to the intervention and then unanimously selected former judge Gerald Lam as mediator and attorney Linden Joesting as hearings officer.

County planning officials said there is no deadline for completing the mediation and possible contested case process.

Malama Kakanilua, Pele Defense Fund and Ho’oponopono O Makena have been granted a petition to intervene on the Grand Wailea Maui’s expansion plans. What comes next is a complicated process with a straightforward goal — find some sort of agreement between the project developers and the people opposing them.

• Who gets to intervene? Residents or organizations are allowed to intervene if they can prove they have a property interest in the land, lawfully reside there or can demonstrate that they would be directly impacted by the project.

• What happens next? First, both sides must undergo at least eight hours of mediation. If they’re unable to settle, they will go to a contested case. Both parties will get a chance to bring witnesses and exhibits before a hearing officer, who then puts together a report with a recommendation.