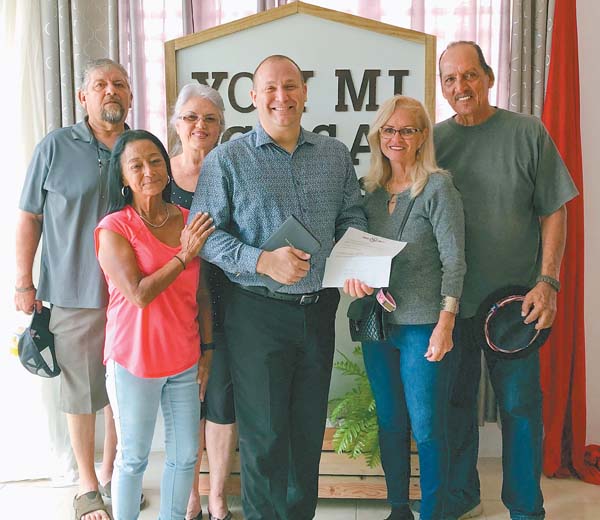 Maui Puerto Rican Association members Bernard Garcia (from left), secretary Deborah Francis and treasurer Deborah Ortiz pose for a photo with the pastor of a church in Puerto Rico on Jan. 6, alongside past President Betty Jane “BJ” Uwekoolani and current President Julius Rodrigues. The association donated some of its surplus funds from its Hurricane Maria fundraiser to four churches. Photo courtesy BJ Uwekoolani

Betty Jane “BJ” Uwekoolani was asleep in her hotel in Ponce, Puerto Rico, when the building began to shake in the early-morning hours of Jan. 6.

“The whole building just rocked,” Uwekoolani said. “It was scary. I never felt something like that before.”

The 5.8 magnitude earthquake off the island’s southwest region (where Ponce is located) was one of the strongest in a series of quakes to hit Puerto Rico in recent days and would be followed by hundreds of other tremors, including a larger 6.4 magnitude quake the next day.

Ironically, Uwekoolani and her fellow members of the Maui Puerto Rican Association were there to bring surplus donations for a fundraiser they’d held for Hurricane Maria relief two years ago. Now, they were caught in the middle of another natural disaster.

“These people are trying to pick up the pieces,” said Uwekoolani, who returned to Maui on Thursday. “Some of them rebuilt, remodeled, fixed up (their homes) only to have this earthquake come and knock it back down. That hurts.”

Uwekoolani, the past president of the association, had traveled to Puerto Rico on Dec. 26 along with current President Julius Rodrigues, treasurer Deborah Ortiz, secretary Deborah Francis and member Bernard Garcia.

After the devastating Category 4 hurricane in September 2017 that killed nearly 3,000 people, according to Puerto Rican officials and a university study, Maui residents with Puerto Rican ties wanted to help. The association launched a widespread fundraising effort, walking into businesses with pitches that they hoped would secure donations, handing out flyers around the community and accepting donations of clothing, furniture and toys that they trucked over to Heritage Hall in Paia and sold in rummage sales.

“We’re such a small club, but we work really hard to do what we can,” Ortiz said.

Ortiz said they were able to raise over $11,000 that they used to buy more than 70 industrial strength, 20-by-30-foot tarps to help cover homes. The tarps were shipped to a relative of a Maui Puerto Rican Association member to be taken to mountainous areas outside the city and brought tears to one family who was relying on a flimsy covering for their damaged home.

Between all the paperwork, the red tape and the shipping costs — the tarps cost about $3,000 and shipping was over $4,000 — the members went “through hell and back to get those tarps to Puerto Rico,” Uwekoolani said.

After the fundraiser, the association still had some money left over and wanted to find a way to use it. So, they packed up the funds and boarded a plane for Puerto Rico.

“Our mission was to go and seek out areas that we could help,” Uwekoolani said.

The group went to devastated areas and visited with churches. Many were either closed or in services that the group didn’t want to interrupt. However, they happened upon an open church and found a young woman who agreed to call the minister. He came down and shared his experiences from Hurricane Maria and told them about the church’s food pantry.

“Tears ran down our faces talking to these pastors,” Uwekoolani said. “We made a donation to him as well.”

The young woman said that she wasn’t even planning to be at the church that day, but it was fortunate that she was. Uwekoolani said the in-person meetings were so much better than simply sending a check.

“That’s what we wanted — to meet them personally and have them know there are people on the other side that are thinking and are worried about them,” she said. “We never like put one check in the mail and send them to one random church. . . . This way we get to talk to the ministers one on one.”

According to Ortiz, the group donated $1,500 to one church and $500 each to three other churches. The remaining $950 will be split between two other churches.

“I don’t want a penny,” Ortiz said. “I want everything gone.”

The Puerto Rico trip, however, was memorable in more ways than one.

Hours after the earthquake near Ponce, the group moved to a hotel in San Juan as previously planned. Before dawn on Tuesday, a 6.4 magnitude earthquake (initially recorded as a 6.6 magnitude quake by the U.S. Geological Survey) shook southwest Puerto Rico, killing one person, injuring nine and knocking out power across the island.

Later that day, Uwekoolani was brushing her teeth when she started to feel dizzy and off balance. It turned out to be another small tremor. According to USGS data, there have been nearly 600 quakes in the vicinity of Puerto Rico since Jan. 6, about 350 of them above 2.5 magnitude and the vast majority situated near the southwest region, including a 5.9 magnitude quake near Guanica on Saturday.

On Thursday, shaken but generally unharmed, the Maui residents flew home. Uwekoolani said it was “rewarding” to meet with the different churches but difficult to see the island still struggling to cope with the aftereffects of Hurricane Maria.

Stores are still closed due to a lack of power, though customers — including the Maui group — were still being allowed inside, with the door locked behind them, and given flashlights to peruse the darkened shelves. Hotels and many other places continue to rely on generators.

“All you hear when you’re walking down the street is generators,” Uwekoolani said.

Residents are constructing makeshift shelters and sleeping outdoors for fear of buildings collapsing during the earthquakes.

“The people there are so strong, and they’re taking everything in stride,” Uwekoolani said. “They have to. They’re not getting the help that they were promised, and so they just move on.”

And while the Maui Puerto Rican Association would love to do more, it may be hard to organize a fundraiser like the one they held after Maria, Uwekoolani said. The active members are a small group, and many are in their 80s or 90s.

“We would have loved to have done more,” she said. “But we did the best we can.”