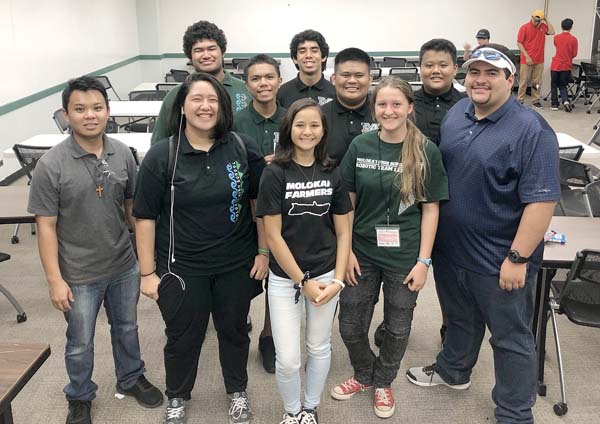 For the second time in as many years, the Molokai Robotics team, made up of eight of the Friendly Isle’s teens, has earned a bid to take part in a world robotics competition on the Mainland.

While the hard part has already been accomplished by the students from Molokai High and Aka’ula School, a potentially more monumental task lies ahead — fundraising.

The team needs at least $12,000 for airfare, accommodations and other needs, such as entry fees, to compete in the 2020 VEX World Championships to be held April 22-25 in Louisville, Ky.

“We are going to have to raise money. We cannot go if we don’t raise money, as it is every year,” said volunteer coach Edwin Mendija, who applies for grants whenever he can to fund the program, as there is no guaranteed financial assistance.

Last year, as the team made it for the first time to the world stage in the FIRST Championship (For Inspiration and Recognition of Science and Technology) robotics competition in Houston, Texas, the team received an outpouring of support when word got around that it needed financial help.

‘Iolani School’s robotics team donated to Molokai a $5,000 grant that the Honolulu private school had received in a Hawaii regional robotics competition. A GoFundMe page for Molokai’s team raised more than $13,075 in about three weeks.

This year’s fundraising page is at gofundme.com/f/send-molokai-robotics-to-vex-world-championship. Donors may also email Edwin_Mendija@molokai.k12.hi.us.

This year, the team of seven students from Molokai High and one from Aka’ula School, Kamaka Adams, earned the world spot by scoring 55 points in a skills division at Hawaiian Electric’s Hawaii State VEX Robotics Championships on Jan. 11 at the University of Hawaii at Hilo.

It was the second highest score in the state in the team’s division, Mendija said.

Skills points come from a single robot scoring as much as possible in both a driving portion of the competition along with an autonomous programming portion, Mendija explained.

Every year there is a new challenge or game for those competing in VEX. This year’s challenge was “Tower Takeover,” which required two-team alliances to compete in matches with their robots and attain a higher score than the opposing alliance by having robots place cubes in towers or score cubes in goals.

For the Molokai team, the students receiving a bid to compete on the Mainland didn’t surprise Mendija.

“I have confidence in these kids for sure. I had taught them in elementary school. I knew they were capable of it. It’s great we got to do it again,” he said.

Some students from last year’s world team are also on this year’s team.

But competition was harder than last year’s, he added. And, without funding, the students couldn’t enter half of the competitions they wanted to this school year.

Even as monetary support may be hard to come by, Mendija said there is support in other ways.

He applauded Molokai High School Principal Katina Soares, who has supported them by giving robotics a room of their own this year.

That means the team no longer has to share a room where equipment needs to be moved around, and their new space now has air conditioning.

Mendija is also working on a drone program for the students, so that projects will not end with robotics, he said.