Pack of dogs in West Maui may have killed sheep 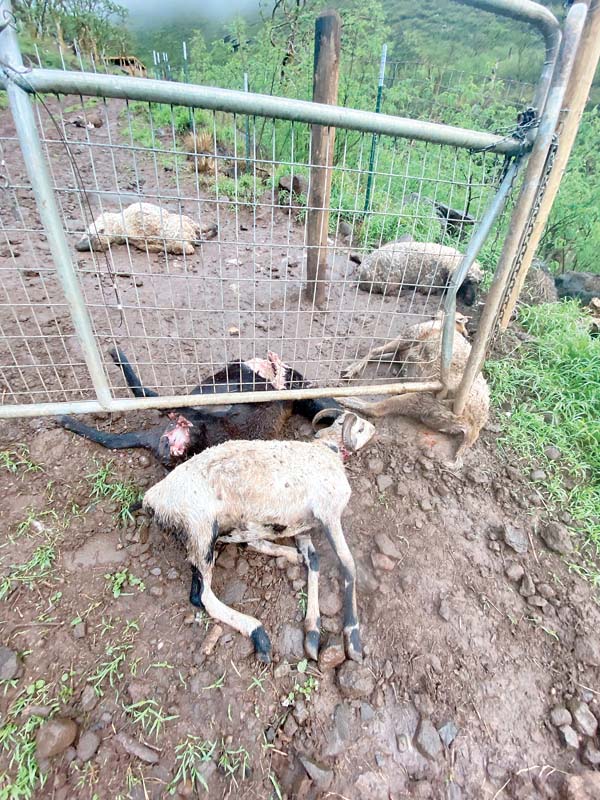 Six sheep, along with bunnies and ducks, have been attacked, mutilated and killed in two separate incidents in Launiupoko in the last month, possibly by a pack or pair of dogs roaming between Launiupoko and Lahainaluna High, said officials from two farms in the area.

The latest incident was on Jan. 12, when Tim Moyer of Lahaina Family Farms found his six sheep, three of which were pregnant, with body parts missing and bloodied. Most were already dead when the family found them when they came home to the farm before sunset after watching a National Football League playoff game on TV in Lahaina town.

“They didn’t eat anything,” Moyer said of the attackers, whom he believes were dogs by the looks of the tracks they left behind. “They ripped them apart. . . . They tore off legs. . . . These were pets for our petting zoo.”

“I can’t even imagine what would happen if children were attacked by these dogs,” said Moyer, who wanted the community to be aware and on the look out.

He also wanted to see if more could be done about the situation and says there are accounts on social media detailing similar situations.

Moyer did not see the attack or any dogs around, but his account is similar to one at Lahaina Animal Farm nearby around the New Year’s holiday. Gilberto Sanchez, caretaker for the farm, said he found a dead bunny and some ducks at the Launiupoko farm, which offers a petting zoo and a place for events.

“I seen (the dogs) running away,” Sanchez said of the attack that took place around 4 a.m.

One dog was brown and the other was black with some white. The two were of mixed breed and maybe with a pit bull mixture, he said.

He chased the dogs away and then found bites on the neck of the bunny.

Similar to Moyer’s incident, the attackers did not kill the animals to eat, but bit them and then let them go.

The killings of the bunnies and ducks were not reported to police. Sanchez said he and his family know there is only so much authorities can do about the situation.

Traps may be set, but unless a live goat or animal is placed in the trap, the dogs probably will not enter because the attacks are not about finding food, Sanchez said.

In 2016, he did report around 15 goats that were killed to the Maui Humane Society. While he cannot be certain, Sanchez believes that one of the dogs in the recent attack on the bunnies and ducks was similar to one he observed in 2016.

Back at Lahaina Family Farms, Moyer did report his Jan. 12 sheep-killing incident to the Maui Humane Society. He also reported it to Maui police, who responded to take information and to file a report.

The Humane Society also responded to the incident and the case is under investigation, said Chief Executive Officer Steve MacKinnon earlier this week.

The Humane Society has set up a trap in the area of Lahaina Family Farms, which conducts farm tours and restoration projects. But so far, no animals have been caught, and there have not been any sightings, MacKinnon said Friday.

Patrols in the area have not generated any reports or actions by officers, MacKinnon said.

Since the sheep attack wasn’t witnessed, MacKinnon said they cannot determine what type of pack was involved or even if the dogs are domestic or wild.

“Periodically, we do get reports of a dog pack in the wild. This is why it is important to get specific information on the observation to possibly link it with other sightings. This will guide us with any future actions,” he said.

MacKinnon asks that people call the Maui Humane Society with any reported attack or sighting of wild dogs. Call the MHS’s main number at 877-3680, ext. 211, to be sent directly to an enforcement dispatcher.

Information needed includes location, descriptions of the dogs and the number of dogs. Animal behavior and other specific details would be helpful, MacKinnon said.

Lahaina has seen other dog pack attacks on animals in the past. In 2014, residents and animal groups reported more than a dozen dogs roaming the Front Street area and killing pets and feral cats. Animal rescue groups said the dogs were owned by a homeless man living in a gulch in Lahaina town.

Sanchez said incidents with dogs wreaking havoc occur every now and then. He heard of someone’s goats and cats killed last year.

MacKinnon said the MHS has not received complaints of dogs attacking people in the Launiupoko area. Still, he said walkers and joggers should consider carrying protection just in case.

“Most often, such reported attacks are a result of domestic dogs off-leash from their owner,” MacKinnon said.

He reminds dog owners that their pets must be “under restraint” per the law. This means dogs must be kept on a leash whenever off-property under the control of the owner. Claims of dogs being under voice control and command are not an acceptable alternative, MacKinnon said.

“An officer observing a violation can issue a citation to the owner,” he added.

For Moyer, the sheep killings were “so horribly devastating.” He remembers one sheep, still alive, but with its guts hanging out. Moyer said he imagined this poor sheep watching the others get attacked and dying.

In terms of dollar value, the sheep cost thousands of dollars. Two were shipped over from Hawaii island.

But “it’s not about the economics,” Moyer said.

“Worse part is, I don’t want to see a child hurt or a person,” he said.

Moyer has put up more fencing and wiring and is keeping an eye and ear out late at night and early in the morning.