KIHEI — A management plan for three watersheds in South Maui could help improve coastal water quality and restore the ecosystem of an area that faces flooding, fires and impacts from livestock.

The Southwest Maui Watershed Management Plan, developed with the help of county, state and federal agencies, was approved just before the new year by the state Department of Health Clean Water Branch and by the U.S. Environmental Protection Agency.

“Our main focus is sediment, nutrients, phosphates and pathogens coming off the landscape during stormwater events,” said Michael Reyes, senior ecologist at Maui Environmental Consulting and associate director of the Central Maui Soil and Water Conservation District who spearheaded development of the plan.

“This is an organic, living document — we can keep adding to the plan and resubmit it to the DOH.”

During a meeting with the Kihei Community Association on Tuesday night at Stawasz Hall at St. Theresa Church, Reyes explained that the projects proposed in the plan aim to improve “public health, water quality, flooding of public roads and private property, habitat for listed species and overall ecological health, the fishing and tourist industries, hotels, resorts, small businesses and the community.” 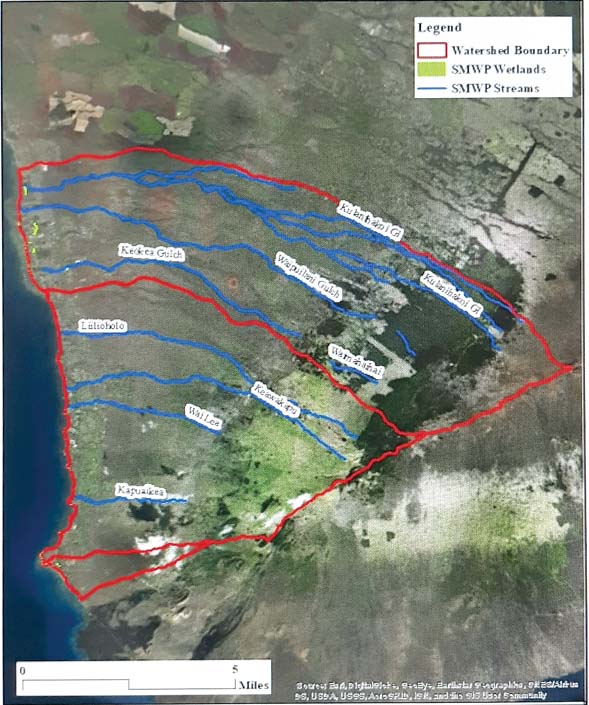 A map outlines the Southwest Maui planning area, which includes Hapapa, Wailea and Mo‘oloa watersheds, as well as the existing wetlands and streams. The Maui News / DAKOTA GROSSMAN photo

The three watersheds in Southwest Maui — Hapapa, Wailea and Mo’oloa — cover 49,688 acres, extending from near the summit of Haleakala down to coastal areas, and including 11 drainage basins that discharge to the coastline along Kihei, Wailea and Makena.

The entire coastline of the planning area is part of the Hawaiian Islands Humpback Whale National Marine Sanctuary.

Sources of pollution in the watersheds include cesspools — 1,655 in the planning area — and faulty septic tanks; fertilizers, herbicides and pesticides from agricultural lands; resort and residential areas; oil, grease and toxic chemicals from industrial and urban runoff; bacteria and nutrients from wildlife, feral animals, livestock and pet waste; sediment from improperly managed construction sites; sediment from eroding stream banks; and nitrates from irrigation systems.

During heavy rainfall on Oct. 23, 2017, there were up to 47 tons of sediment discharge per hour where Kulanihakoi Stream meets Piilani Highway, according to the report.

“Kulanikakoi in particular has had so much sediment deposited into its floodplain that this section of the stream is no longer able to rise above its flood banks and access this area of the stream during smaller storm events,” Reyes said.

During the research process, turbidity (excess particles in water), Chlorophyll-a and other parameters were measured within the planning areas to ensure that coastal waters met state Department of Health water quality standards.

High turbidity levels were observed at all 29 sample sites, and among 18 of those sites tested for Chlorophyll-a, “none attained state water quality standards,” generally indicating poor water quality.

And, an increase in algal growth usually means there’s a high nutrient count, which can lead to algae blooms, suffocating coral reefs and fish.

Turbidity and nutrient levels were a problem in all three watersheds, particularly in Hapapa, where total nitrogen, inorganic nitrogen, ammonia, total phosphorus and Chlorophyll-a were all areas of concern.

The management plan calls for several projects to help improve the watersheds. One of the projects that Reyes deems a priority is the Keokea Riparian Protection and Rehabilitation Project, which has a projected cost of $50,000, although the DOH had requested a $6,000 budget.

“This project hits on several of the goals of the Southwest Maui watershed plan,” said Reyes, explaining that the project will include protection for streams, fencing to keep out feral animals, removal of kiawe trees and buffelgrass and planting of native dryland species.

The project would also use R-1 recycled water from the Kihei Wastewater Treatment Plant.

Planting is slated for completion around the start of 2021, and Reyes hopes to get volunteers involved.

“We’ll have the opportunity to expel science and teach the community about different native plants that are being planted. People will be able to come out and work,” he said. “We think this project hits several different notes and I think that’s why the DOH chose this particular project.”

Although Reyes is still seeking funding for the remaining plans, which are eligible for federal funds, he shared some solutions and proposed project ideas, such as incorporating aquifers, stream diversions and excavated detention basins. All would be used to capture or slow down stormwater on the landscape and allow it to percolate into the aquifer.

Pollutants would be removed prior to the water entering the ocean, which would reduce an estimated 2,200 tons of sediment per year from Waipuilani Gulch to Piilani Basin, for example.

Citing the Natural Resources Conservation Service, Reyes said that wetlands in Kihei have decreased from 199 acres in 1965 to 83 acres in 2001 and are estimated to be a lot less now.

The three watersheds also include areas of fast population growth, with Upcountry increasing an average of 3.3 percent per year and the coastal areas by 10 percent.

On top of that, the county Planning Department also reported that there is a total of about 11,610 acres of planned development projects within the area. This would more than double the existing developed area at about 4,200 acres.

Reyes said that “another crucial project that will benefit Southwest Maui is farm and grazing management for feral animals,” which involves taller or more sustainable fences, planting more vegetation in high impact zones and adding berms, as well as creating ungulate-free zones by next year.

“With all the fires that have been happening, we have had even larger populations of deer that are grazing in south,” Reyes added. “More than half the land in the planning area is grazed by animals.”

He pointed to a video filmed about two weeks ago that showed more than 100 deer running through North Kihei, trampling vegetation and kicking up soil.

For more information about the plan, visit mauiwatershed.org or view the detailed report at eha-cloud.doh.hawaii.gov/cwb/#!/watershed-based-plan/8/details/view.