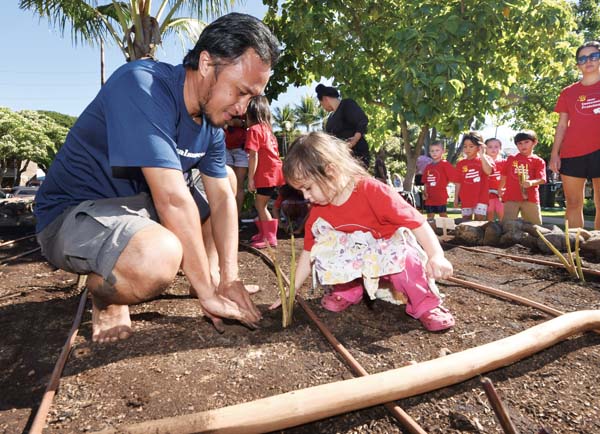 Namea Hoshino helps Holy Innocents Preschool’s Isla David, 3, plant a stalk of kalo during the opening of a new Lahaina cultural park on the former site of the king’s kalo patch last week. The park, featuring three dryland kalo beds, native Hawaiian plants and grass lawn, is located across from the Baldwin Home Museum on a county-owned lot between Lahaina Public Library and Front Street. The project was spearheaded by the Lahaina Restoration Foundation and funded by the county Department of Parks and Recreation. The area was once known as Apuakehau, the royal kalo patch of King Kamehameha. Kalo, also called taro, was a food staple of ancient Hawaii. King Kamehameha III was said to have worked in the patch himself, providing his people with an example of the benefits of hard work while taking joy in growing the plants with starchy tubers and large, heart-shaped leaves. Hoshino is the kalo varieties manager for Maui Nui Botanical Gardens.

Erin Wade, county redevelopment program planner, talked about the start of Phase 1A of the Wailuku Civic Complex, which includes road improvements, during a community meeting Wednesday night in Wailuku. The Maui News / KEHAULANI CERIZO photo

Cindy Halliburton of Dallas, Texas, shops for books Thursday at the Friends of the Library store at the Outlets of Maui. “I just called my husband and said hurry up and get here before I buy any more books,” she said. “We love this place,” said husband, Alan Halliburton, when he arrived. “We come here every time we come to Maui.” The Maui News / MATTHEW THAYER photo

Calgary visitor Niki Rickhi pays Friends of the Library volunteer Fred Muehlmann for a pair of books Thursday afternoon at the new Lahaina location at the Outlets of Maui. Former library worker Rickhi said she found the used book store a treat. “I enjoy books,” she said. “I appreciate it.” The Maui News / MATTHEW THAYER photo

Maui High School students Tyler Fisher and Natasha Adamson will take the stage as Orlando and Rosalind/Ganymede, respectively, in MHS Saber Theatre’s production of William Shakespeare’s “As You Like It.” The family-friendly show opens Feb. 21 and runs for two weekends. Photo courtesy Roxanne Wada

Roxanne Wada – Is in her element

The Maui Friends of the Library’s used book store in Lahaina recently relocated from The Wharf Cinema Center to the Outlets of Maui, also in Lahaina. NORM BEZANE photo