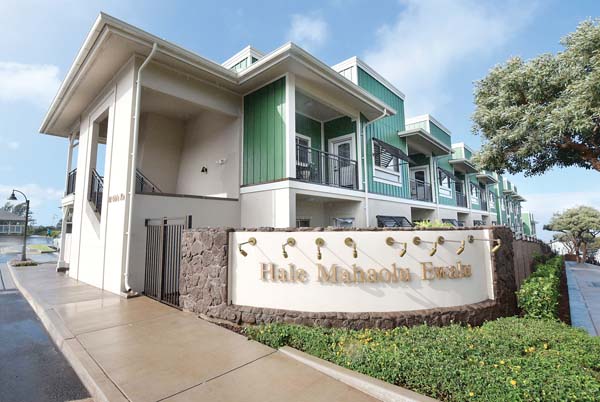 All 38 units of Hale Mahaolu Ewalu’s first phase have been filled with tenants; Phase I of the affordable housing project in Pukalani was officially completed with a blessing of the complex’s senior center Wednesday morning. The Maui News / MATTHEW THAYER photos

Although tenants have already moved into the 38 senior-living units, Hale Mahaolu Executive Director Grant Chun was excited to announce the grand opening of the senior center building, which contains a laundromat, a beauty salon, administrative offices, a commercial kitchen and a maintenance shop.

“It’s been eight years since this parcel was acquired, and planning began in earnest for this facility,” Chun said to about 30 people who attended the blessing at the Kulamalu Town Center at the Pukalani Ewalu site. “The future is bright for Hale Mahaolu Ewalu with our wonderful staff and team. Together, truly, all of you made today possible. You made Hale Mahaolu Ewalu a reality and most importantly, your efforts have come together to provide homes for our kupuna here in Pukalani, and that is something to celebrate.”

The senior center totaled $5.25 million, which included funding from the The Harry and Jeanette Weinberg Foundation, Hale Mahaolu and state grants-in-aid. The Community Development Block Grant provided $550,000 for the kitchen build out.

Hale Mahaolu Board Chairman Gerald Hiyakumoto said the nonprofit provides about 16,000 meals every month across Maui County sites through its Meals and Congregate Housing Services Program, and hopes to expand the program through the “evolving commercial kitchen.” 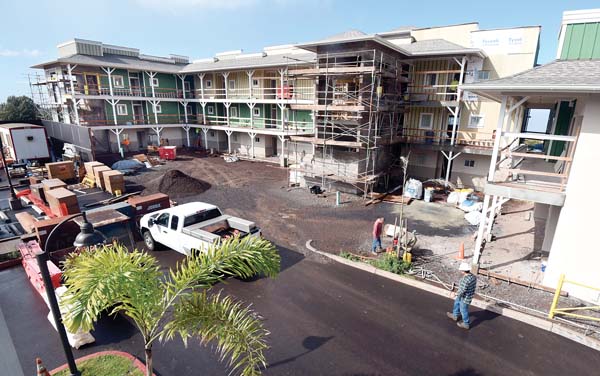 Work continues on Hale Mahaolu Ewalu’s 22-unit Phase II, which is scheduled to be completed this summer

“It took a village,” Chun said. “There are so many moving pieces, so many different folks who came together to make this happen and again, just a huge appreciation.”

The Project-Based Voucher Program, which is being administered by the county Housing Choice Voucher Program office, offered 38 vouchers to subsidize rents, meaning tenants only pay 30 percent of their monthly income.

Hale Mahaolu Ewalu resident Will Rivera said he was “pretty lucky” to have his application chosen during the randomized selection process for Phase I rental units.

“It’s fantastic, there’s nothing to complain about,” Rivera said while checking out the Phase II construction site. “For me, I’m a community type of person, I like that the people come together and get along and just enjoy life.”

Rivera added the new senior center will “really help us to get together now” and that it will be a “good meeting place and opportunity for everyone” to build relationships.

The groundbreaking for the $11.7-million, 22-unit Hale Mahaolu Ewalu Phase II was held in January of last year and is slated for completion this summer. It also will be for qualifying low-income families and individuals whose head of household is 62 years or older with no criminal history.

The Phase II rentals will follow U.S. Department of Housing and Urban Development regulations and will not utilize the Voucher Program, Chun said.

Applications will be available in March.

“This is a great way to start the new year,” Mayor Michael Victorino said. “When we partner like this, look what we have accomplished. I’m hopeful that we can continue this. To me, it’s very important. The kupuna have done much for us, and I want to make sure they are never forgotten.

“There’s another generation to look at, I’m not thinking about it, it’s there,” added Victorino, who recently became a great-grandfather. “So what we did here today, is what Maui is really all about.

“It took awhile, but we’re here, and want to say that hopefully, this is just one of many we can look forward to.”

Jan Dapitan, who was director of the county Department of Parks and Recreation, is shown at her desk in this photo taken in the mid-1970s. Dapitan, 84, died Dec. 30 after a five-year battle with cancer. Photos courtesy of Jan Dapitan’s family

Jan Dapitan (left) is shown with Linda Takita in this photo taken in 2017. Takita, founder of Maui Youth Theatre (now known as Maui Academy of Performing Arts), credits Dapitan as the key person responsible for the theater’s establishment as a county after-school program in 1974.

Mark Ingram, who won the Heisman Trophy in 2009 with Alabama, is questionable for Saturday’s game with a calf injury. Ingram has rushed for 1,018 yards and 10 touchdowns this season for the top-seeded Ravens.

All 38 units of Hale Mahaolu Ewalu’s first phase have been filled with tenants; Phase I of the affordable housing project in Pukalani was officially completed with a blessing of the complex’s senior center Wednesday morning. The Maui News / MATTHEW THAYER photos

Work continues on Hale Mahaolu Ewalu’s 22-unit Phase II, which is scheduled to be completed this summer