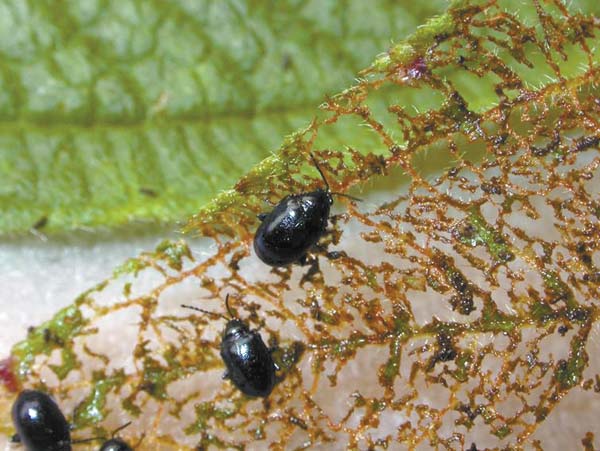 Adult Syphraea uberabensis beetles feed on cane tibouchina. Studies showed that the plant struggled to grow back after an attack by the beetles. Lon Bulgrin photo

A Brazilian beetle with an appetite for a certain invasive weed could help to control the plant that grows thick in Maui’s forests and outcompetes native species.

Syphraea uberabensis is a small beetle whose adults and larvae feed on cane tibouchina in the beetle’s native region of Brazil. The state Departments of Agriculture and Land and Natural Resources are proposing the beetle’s release on state lands — starting with Maui and Hawaii Island — as a form of biocontrol against the invasive tibouchina and other related weeds.

“For a nasty weed like tibouchina, what we’re trying to do is . . . basically create more balance between the target tibouchina and the environment,” said Darcy Oishi, biological control section chief for the DOA. “It’s basically creating another tool to slow the weed down and allow more active and aggressive control mechanisms.”

Cane tibouchina, known as Tibouchina herbacea, is a noxious weed native to southern Brazil, Uruguay and Paraguay. Its young stems are angled and hairy, with pink and purple flowers, and bright yellow anthers. Each plant can produce hundreds of seed capsules that can in turn produce up to 700 seeds the size of a grain of sand. These tiny seeds are easily dispersed through the wind or by wild animals, humans, vehicles or water. 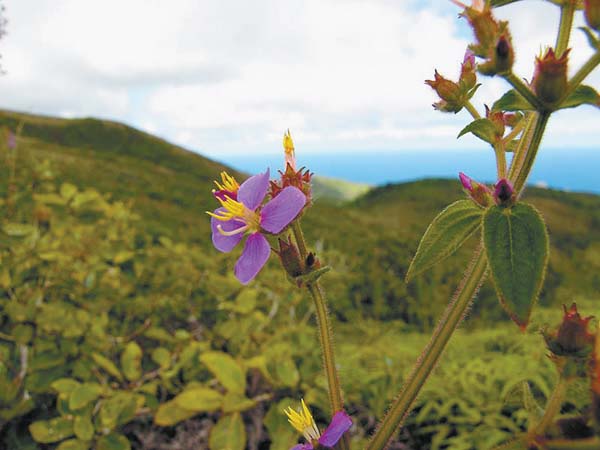 Notable for its pink-and-purple flowers and tall hairy stems, cane tibouchina is an invasive weed found throughout Hawaii’s pastures and forests. FOREST AND KIM STARR photo

In Hawaii, the semi-woody upright shrub has become abundant in wet and mesic (between wet and dry) forests on Maui, Molokai, Lanai, Oahu and Hawaii Island. Once established, tibouchina forms dense thickets that are difficult to walk through and displace native vegetation.

Originally introduced to Hawaii as an ornamental plant, tibouchina was first collected on Hawaii island in 1977. It had “colonized” Maui by 1982, and was widely established on both islands by the time it was found on Lanai, Molokai and Oahu.

Oishi explained that in a plant’s native region, there are natural threats to keep it in check — insects, animals and diseases.

“When you bring it to a new environment like Hawaii, none of those things that maintain the checks and balances are there,” Oishi said. “It becomes much more aggressive than in the natural environment, and that allows them to dominate landscapes. What we’re trying to do is reverse that trend and introduce more balance.”

In Brazil, the weed rarely grows beyond 3 feet in height. But in Hawaii, it can grow up to about 10 to 13 feet. 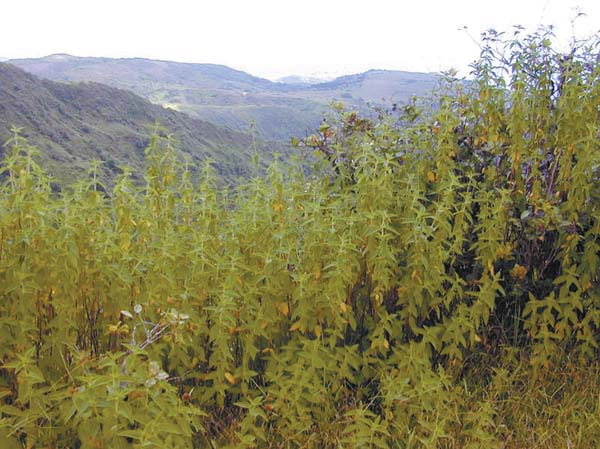 Attempts to control the plant have included the use of herbicide, as well as mechanical removal, though the latter is not as effective because the cut plants will sprout, and the broken pieces can root and form new plants if left in place. But these methods are proving too costly, which is why the state is now turning to biocontrol.

Syphraea uberabensis is a natural herbivore of tibouchina in Brazil. The tiny beetle has an elongated body colored a deep metallic blue and enlarged hind legs that allow it to leap when disturbed. Oishi said the beetle doesn’t bite or sting, and that “the likelihood that people will notice it is even very slim.”

Of all the insects and plant diseases evaluated for potential biocontrol in Brazil, S. uberabensis showed the most potential. Observations in Brazil and extensive testing in both Brazil and Hawaii have shown that the beetle can lively solely on tibouchina and a few closely related plants that are also weeds in Hawaii.

Oishi said that the state is rigorous in its screening and looks specifically for a type of species that “exerts the kind of pressure we want” but doesn’t feed on native plants. Tibouchina comes from the melastome family of plants, and “we’re fortunate that we have no native melastomes,” Oishi said.

The beetle causes extensive damage to the leaves of tibouchina, as well as to the soft exterior of the young stems. Oishi said that “it’s not necessarily going to result in landscape-level killing of the plant,” but that the beetle has the potential to be “a powerful tool” in helping people on the ground combat the weed.

Lissa Fox Strohecker, public relations and education specialist for the Maui Invasive Species Committee, said that tibouchina is mainly a threat in the wet areas of Maui, particularly on the windward side, though it’s invaded forests islandwide. Because MISC focuses on stopping or eradicating invasive species in specific locations, it doesn’t work on tibouchina, which is too widespread.

“It’s discouraging to see it spread and take over so fast,” Strohecker said, pointing as an example to the Waihee Ridge Trail, where the tibouchina has grown tall over the past decade and traveled higher up the mountain in hikers’ boots.

Chris Brosius, program manager with the Mauna Kahalawai Watershed Partnership, said he has to review the draft assessment first but was “very hopeful” about using the beetles as biocontrol.

“Tibouchina is one of several weeds that are modifying the habitat and it’s one of the worst–I would say, one of the top 10 that have spread within our most pristine native forest areas,” he said.

Brosius explained that tibouchina is particularly adept at invading areas that have been disturbed by tree falls, landslides, storms or wild animals. That’s why the windward slopes that are more moist and take more of a beating from the weather tend to have more tibouchina. And, the more invasive weeds there are and the less diversity there is, the more susceptible an ecosystem is to natural events.

“If you have a disease or drought or something that comes through that impacts that one species, then you have denuded landscapes,” Brosius said. “The more diverse of an ecosystem you have, the more resilient it is, and that’s why it’s important to control species like tibouchina because they upset the balance.”

Brosius said the watershed partnership works to control the plants by hand and remove them from sensitive ecological areas, but “we currently are not able to do much that is very effective in a widespread situation.”

“So that’s why the natural enemy or introducing a biocontrol is appealing, because we simply couldn’t deal with this otherwise,” Brosius said. “The insects–they’re able to go to places where people can’t.”

The state is proposing release of the beetle on state lands where tibouchina has taken hold, with hopes that the beetle will spread naturally and through more releases. Oishi said the state doesn’t have specific locations for release sites at this point; first, all the approvals need to be secured.

Costs of distributing the insect are expected to be relatively low. Facilities, equipment and personnel are “simple and minimal,” according to the draft assessment. Establishing self-sustaining populations in field sites statewide likely can be accomplished within one year with a few staff working only part time — an estimated cost of $40,000 for one technician over one year.

• What. State officials proposing the release of a Brazilian beetle to help combat the invasive weed cane tibouchina on state lands – starting with Maui and Hawaii island. A draft environmental assessment has been released.

• Viewing the plan. Visit oeqc2.doh.hawaii. gov/Doc_Library/2020-01-23-ST-DEA-Noxious-Weed-Tibouchina-Biological-Control.pdf or go to health.hawaii.gov/ oeqc/ and view the Jan. 23 edition of “The Environmental Notice.” Copies also can be obtained by mail at Garcia and Associates, 146 Heikili St., Suite 101, Kailua 96734; or email through Huang-Chi Kuo at kuo@garciaandassociates.com.