Marchers mark his birthday, express hope for the equality and unity he championed 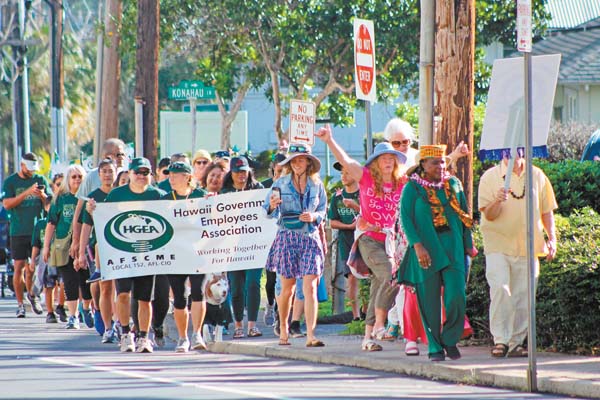 Marchers walk up Wells Street in Wailuku during the annual march to honor Martin Luther King Jr. on Monday. The march started and ended at the county building, where there were speeches, food, music and dance. About 200 people showed up to celebrate the birthday of the iconic civil rights leader. The Maui News / COLLEEN UECHI photos

WAILUKU — As Martin Luther King Jr. preached against injustice in the 1960s, Gwyn Gorg marched through the streets of Los Angeles advocating for fair housing and better jobs, while angry bystanders threw rocks and shouted slurs.

“I marched and marched, went to jail, carried signs, sang songs,” Gorg said. “Was really scared a lot when the real mean people showed up. But I learned, and through Martin Luther King, we learned nonviolence. We learned that no matter what people did or said, we could not retaliate.”

During a celebration of King’s birthday in Wailuku on Monday, Gorg participated in a much more peaceful march, where parents and children carried paper cranes, bagpipes played “Amazing Grace” and nobody threw rocks. But while Gorg is happy to see how far the world has come, she’s also saddened that society, in many ways, has fallen short of King’s dream.

“I guess I was naive, because I really thought by now–I just thought it would be a lot different; a lot better,” said Gorg, president of the African Americans on Maui Association. “And it seems like in the last few years, we’re just going further and further apart.”

It’s why every January, Gorg and other march organizers do what they can to keep King’s dream alive. 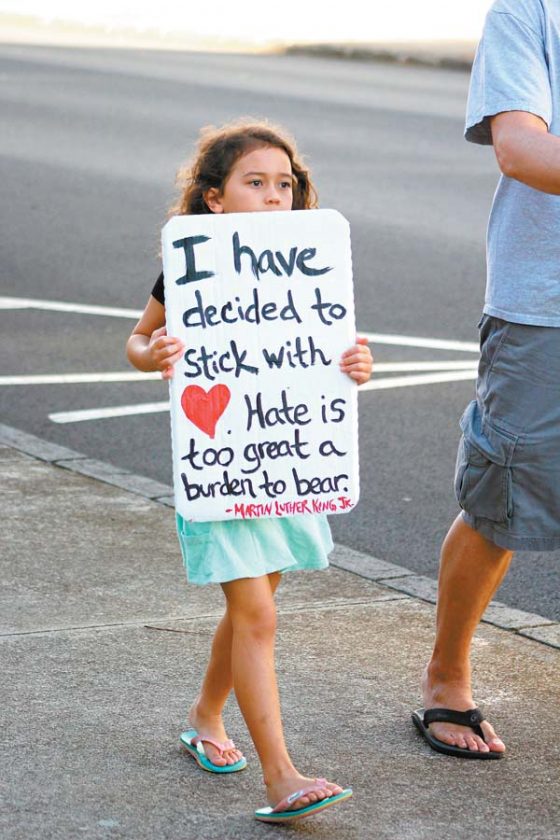 Five-year-old Elena Szakacs of Maui Lani carries a sign with comments from Martin Luther King Jr.’s speech “Where Do We Go From Here?”

Bryant Neal does it by channeling King himself. Every year Neal dons a suit and tie, carries a binder of speeches up to the county building and does his best impression of the iconic civil rights leader.

“There’s something about the words and hearing that live,” Neal said.

Neal delivered two of King’s speeches on Monday — his famous “I have a dream” speech and an excerpt from the final speech he gave on April 3, 1968, the day before he was assassinated. Neal said he’s been doing King’s speeches for about a decade now, and while he’s grown used to playing the part, King’s words fill him with renewed vigor every time.

“It’s just not one of those things that you can just read calmly,” Neal said. “I find even in my head, if I’m reading silently, it’s still going off in there. . . . You can’t be neutral with it. It basically embodies you.”

Neal said he was talking with a friend who mentioned that the hatred of King’s day was “being revived.” Neal believes it’s not so much being revived as it is “being revealed.” King’s cause and the civil rights bills that followed helped solidify rights for African Americans and pushed people to adjust their behavior. But for some, the hatred never really went away, and now they feel emboldened to let their true feelings show, Neal said. 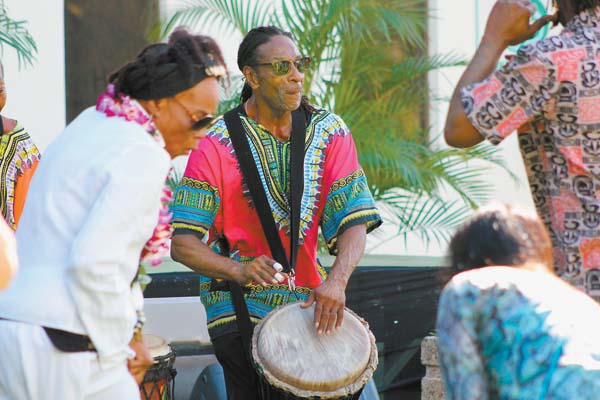 Glen Lacy of Kihei (center) bangs out a beat on the drum while members of the audience, including Gwyn Gorg (foreground, left), president of the African Americans on Maui Association, dance along.

“I know (King’s speeches) had some effect,” Neal said. “There’s no question about that. But I think as generations have passed, some of the true meaning of it has been lost. And some people who were lost are now revving up that same hatred and vitriolic attitudes toward people. So it’s still just as important, because I think for the ones who are committed, it’s a recommitment when they hear the words, and ones who’ve never heard it before, then maybe it’s them opening their minds to what could be.”

Like Gorg and Neal, Sandra Shawhan didn’t think King’s dream had quite been realized.

“No way; no. In fact, in some ways, we’re probably going backwards with all of the hate crimes that go on, the church shootings and bombings,” said Shawhan, vice president of the African Americans on Maui Association. “His dream is not for that. His dream was unifying all of us, and we have not achieved that yet.”

Shawhan, a former principal at Princess Nahienaena and Kamali’i elementary schools, said one of the things she wants people to remember about King is that he championed the rights of not just African Americans, but all people, including workers.

Equality and inclusion are the kinds of lessons that Mary Emmons of Maui Lani hopes her kids will learn early on. She had just gotten off a night shift at the hospital but still had enough energy to bring her kids to the early morning march. Her 5-year-old daughter, Elena Szakacs, carried a sign with King’s comments: “I have decided to stick with love. . . . Hate is too great a burden to bear.”

“It’s important for the kids,” Emmons said. “It’s their generation that’s going to make the big change, hopefully. We should instill those values early on.”

Marchers walk up Wells Street in Wailuku during the annual march to honor Martin Luther King Jr. on Monday. The march started and ended at the county building, where there were speeches, food, music and dance. About 200 people showed up to celebrate the birthday of the iconic civil rights leader. The Maui News / COLLEEN UECHI photos

Five-year-old Elena Szakacs of Maui Lani carries a sign with comments from Martin Luther King Jr.’s speech “Where Do We Go From Here?”

Glen Lacy of Kihei (center) bangs out a beat on the drum while members of the audience, including Gwyn Gorg (foreground, left), president of the African Americans on Maui Association, dance along.

DUI Task Force Officer Jason Thompson administers a field sobriety test on a driver Friday night, as officers began implementing a new Maui County law that allows police to tow vehicles of those arrested for driving under the influence of an intoxicant.

DUI Task Force Sgt. Nick Krau conducts field sobriety testing on a driver stopped for suspicion of drunken driving shortly after 2 a.m. Saturday on Hookele Street across from Zippy’s restaurant in Kahului. The 48-year-old Kahului man had his pickup truck towed after he was arrested for driving under the influence of alcohol and driving without a license.

A D&D Towing employee secures a pickup truck before it’s towed away after the driver was arrested for drunken driving early Saturday on Hookele Street in Kahului. The truck was the second vehicle to be towed after police began enforcing a new Maui County law allowing police to tow vehicles of people arrested for impaired driving. The Maui News / LILA FUJIMOTO photos

While Suzuki’s son Kai, 6, may have been too young to officially participate in his dad’s clinic, that didn’t keep him from working on his game as he slides into third base Saturday.

Braedon Souza leaps to throw after fielding a ground ball while on the run to his right during a drill at the Kurt Suzuki All Pono Baseball Clinic on Saturday.

Hailey Souza works on her swing.