W. Maui Friends of the Library moves to Outlets of Maui 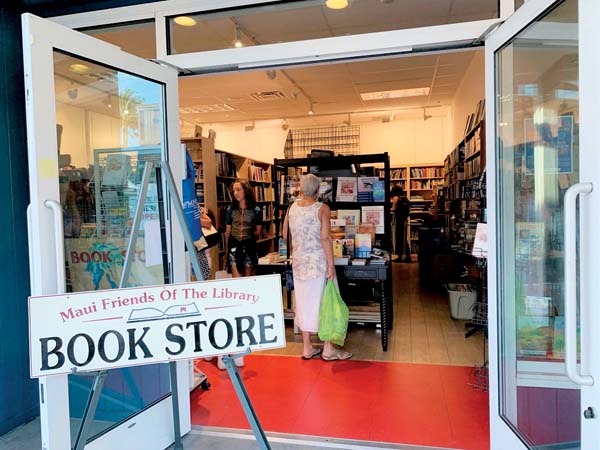 The Maui Friends of the Library’s used book store in Lahaina recently relocated from The Wharf Cinema Center to the Outlets of Maui, also in Lahaina. NORM BEZANE photo

Maui Friends of the Library Bookstore in Lahaina, the only bookstore in West Maui, relocated several blocks north on Front Street to the Outlets of Maui last week.

For nine years, the nonprofit Friends Lahaina bookstore was in The Wharf Cinema Center. But with management changes at The Wharf and uncertainty about terms for a new lease, the Friends began making inquiries. The Outlets offered the group a space, said the nonprofit’s director, Sara Foley.

“The terms were very good, and we said OK,” she added.

Peake & Levoy is the current manager for The Wharf Cinema Center, its office confirmed Wednesday morning.

The Friends also have bookstores in the Queen Ka’ahumanu Center and at the old Puunene School. Foley said the landlords have been very generous in their lease terms with the nonprofit unable to pay market rates. 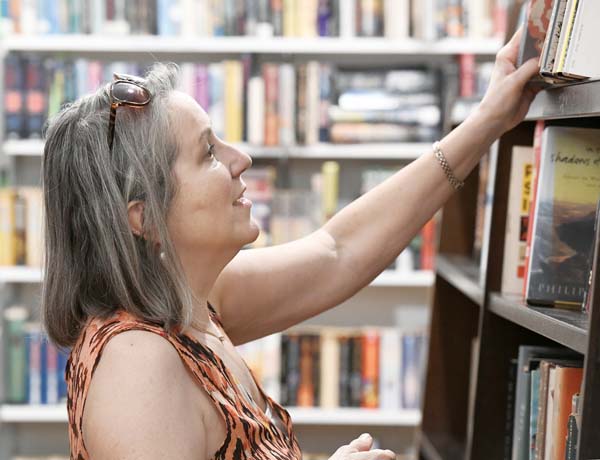 Cindy Halliburton of Dallas, Texas, shops for books Thursday at the Friends of the Library store at the Outlets of Maui. “I just called my husband and said hurry up and get here before I buy any more books,” she said. “We love this place,” said husband, Alan Halliburton, when he arrived. “We come here every time we come to Maui.” The Maui News / MATTHEW THAYER photo

The Friends stores sell used books and new Hawaiiana and titles penned by Maui authors in order to raise funds for Maui County’s nine public libraries. This includes the Bookmobile, which the organization bought for $300,000 for the state library system, Foley said.

The stores also divert books from the landfill.

Lahaina store manager Jo Ann Carroll said that business will be better at the new location.

“It better be, once people know we are there,” Carroll said Tuesday about a week after she and 20 other volunteers packed 15,000 books for the movers.

The new store at the Outlets is across from Tommy Hilfiger and has a couple of advantages from the old spot at The Wharf. It is 150 square feet larger than the old store, which was 650 square feet, and is on the ground level with more foot traffic. The old store was on the third floor, and not everyone wanted to climb the stairs to get there, Carroll said. 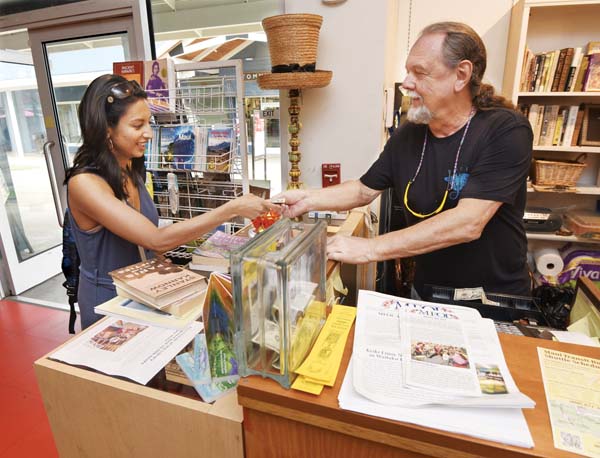 Calgary visitor Niki Rickhi pays Friends of the Library volunteer Fred Muehlmann for a pair of books Thursday afternoon at the new Lahaina location at the Outlets of Maui. Former library worker Rickhi said she found the used book store a treat. “I enjoy books,” she said. “I appreciate it.” The Maui News / MATTHEW THAYER photo

The old store was near the Regal Wharf Cinema Center 3. Nearby merchants and social media postings noted that the theaters closed recently. Emails seeking confirmation and comment sent to both The Wharf Center and Regal headquarters on the Mainland were not returned. A phone line to the theater kept ringing and was not answered Wednesday.

The store isn’t just filled with old paperback books, Carroll said. It carries old, hard-to-find and out-of-print books, which are attractive to collectors. Selections include children’s and self-help books.

The Friends Lahaina store became the only bookstore in West Maui in spring 2018 when Barnes & Noble moved out of the Lahaina Gateway Center and into the Maui Marketplace in Kahului.

Carroll was sad to see Barnes & Noble go; the store used to send their customers to the used book store to find titles that the large retailer didn’t have.

After the move last week, the store was not quite ready to open, Foley said. Still, customers came in, waded through the moving mess and looked for books that were not on the shelves yet.

Old customers have made their way to the new site. One man swears that the collection of books has changed since the move, but Carroll said that’s not true.

“We just moved it from one place to another,” she said “The lighting is better, that’s it.”

The Lahaina bookstore, which is staffed by volunteers, is open from 10 a.m. to 7 p.m., daily.