Proposed civic center building is being sent back to drawing board 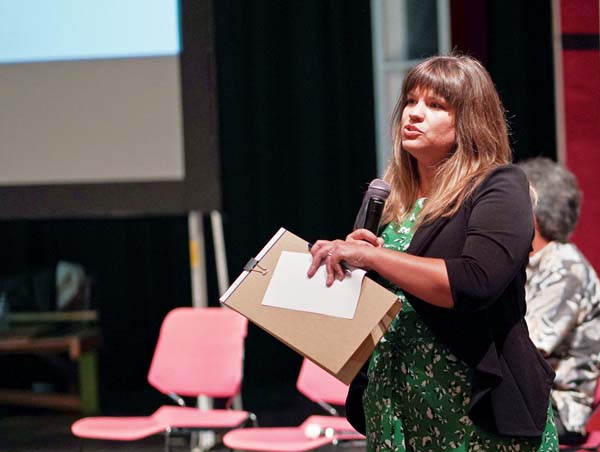 Erin Wade, county redevelopment program planner, talked about the start of Phase 1A of the Wailuku Civic Complex, which includes road improvements, during a community meeting Wednesday night in Wailuku. The Maui News / KEHAULANI CERIZO photo

WAILUKU — After delays, construction finally may commence next week on the first portion of a $40 million multiphase project to upgrade infrastructure and build a four-level parking structure in downtown Wailuku, county officials said.

Temporary parking displacement and lane closures for Phase 1A work on the Wailuku Civic Complex soon will be seen on Church and Main streets. Brian Ige, Dowling Co. Inc. construction manager overseeing the projects, advised drivers and pedestrians to avoid the areas if possible.

Ige, along with Erin Wade, county redevelopment program planner, provided the latest update on the Wailuku Civic Complex project during a community meeting at Iao Theater on Wednesday night. About 40 people attended.

The $10.5 million Phase 1A covers road and infrastructure work for portions of Church, Main and Vineyard streets. The $30 million Phase 1B, which won’t begin until spring 2021, includes construction of a 428-stall structure that doubles the number of stalls currently available in the municipal parking lot.

Meanwhile, Phase 2, a proposed $40 million, three-story civic building and plaza that drew some community opposition over its size and cost, will go back to the drawing board, Wade said during the meeting. Plans called for offices, community rooms, a market and an outdoor plaza space.

“It really became a lot and the budget number kept going and became insurmountable,” she said.

Now, the civic building’s project advisory committee is being pulled back, and the county will reconsider priorities for the space, Wade said. A revised plan with community input may be presented during the fiscal year 2022 budget cycle, which runs from July 1, 2021, to June 30, 2022.

“We are not going to go back for funding for this as it’s designed,” she said.

Wade added that a different project can be built incrementally, as interest grows.

Though originally scheduled to begin in September, Phase 1A permits finally have been secured. MIRA Image Construction contractors have been mobilized and work on Church Street may begin next week, according to Ige. Work is slated for phases to mitigate its effect in the town center.

“We are not going to start squeezing all these phases together because we are little bit behind,” Ige said. “We will make sure there is enough circulation around town, and we want to preserve parking as long as possible before coming in with the parking structure.”

Wade emphasized safety for the parking lot, saying the upper floors will be secured after hours and the structure will be well-lit and with security cameras. Also, an on-site vendor will manage the facility.

“Moving to a full-time management of the parking structure will be important not just for safety but for upkeep and maintenance,” she said.

The structure, initially designed for 40 electric vehicle stalls, has been scaled back to four (one stall is required per 100 vehicles) after community concerns; more can be added if demand increases, Wade said.

Also, a photovoltaic trellis on the roof was removed from the design because bids came in over budget.

Work on the Wailuku Civic Complex Phase 1A, a multiphase project to upgrade streets and build a four-story parking structure in downtown Wailuku, likely will start next week, project officials said. Motorists and pedestrians are asked to avoid the areas if possible. The disruptions include:

• No parking on portions of Church and Main streets.

• Traffic on Church and Main streets may be periodically limited to one lane only.

• Pili Street access to the municipal parking lot will be closed.

The duration of the work, which will run weekdays from 8:30 a.m. to 3:30 p.m. with some night work possibly required, follow: