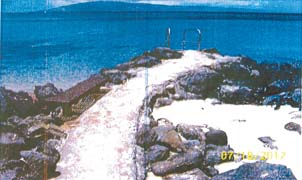 A concrete walkway that provides access to a rock outcropping along the shoreline fronting the Kuleana II condos is pictured in 2012, back when a complaint was initially filed with the state. State Department of Land and Natural Resources photos

Two West Maui groups have filed a lawsuit against a Mahinahina condominium that they say has put up unpermitted structures and blocked public access to the shoreline.

Na Papa’i Wawae ‘Ula’ula and the West Maui Preservation Association took legal action last week against the Kuleana II condominium complex, who they say has installed fencing and gates completely blocking access and installed illegal improvements on state land, including a concrete stairway with a wooden railing, concrete slabs and walkway along the shoreline, a concrete bench and a metal ladder secured to shoreline boulders.

“I really just want access to be restored for our community, and to honor the generational families who have always enjoyed access for fishing, diving and Hawaiian cultural practices in this area,” said Kai Nishiki, chairwoman of Na Papa’i Wawae ‘Ula’ula and president of the West Maui Preservation Association.

Nishiki said that the county and state found out about the shoreline improvements eight years ago.

According to a July 2012 complaint filed with the state Department of Land and Natural Resources’ Land Division, a concrete bench was located on the upper portion of the existing sand beach. Directly above the sand shoreline was a concrete stairway with a wooden railing providing access to the shoreline through the naupaka hedge from the Kuleana complex. About 20 yards south of the bench were remnant sections of concrete and stairs that appeared to have broken off from a second walkway that provided access to a rocky outcropping. At the outcropping, a stainless steel ladder was mounted to the rocks to provide access into and out of the water. 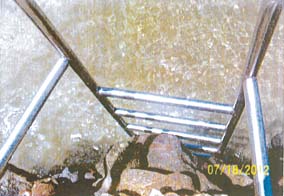 The ladder that has been attached to the outcropping. Both installations are alleged to be unpermitted.

“All improvements along the shoreline and within the county SMA area appear to be unpermitted,” the Land Division complaint stated.

In August 2014, DLNR sent a letter to Kuleana II stating that the improvements were located on state land, and that they would need to be removed. The department had “no record of any request or authorization ever being granted for the use of this area,” and gave the condo two options: remove all the improvements, or ask for a non-exclusive easement for “encroachments” that did not block public access on state land and posed no environmental threat.

When asked for an update last week, DLNR spokesman AJ McWhorter said that “we do not comment on matters under litigation.”

Destination Maui, which manages the Kuleana II condos, referred The Maui News to Anderson Lahne & Fujisaki, a law firm for the condo association. The firm did not immediately respond to a request for comment last week.

Nishiki, who used to live in the Mahinahina neighborhood, said that people have been able to access the shoreline area known as Iae o Kama through the Kuleana property for years. But after being told by the state to remove the structures in 2014, the condo instead doubled down on access, installing fencing and locking gates that blocked access to the shoreline.

“During this time other resorts in the area started doing the same thing, basically blocked everyone on the west side from having access to over, I’d say, a little over two miles of shoreline,” Nishiki said. “Now we had zero access. And there’s surf spots out there, dive spots. My kids and the neighborhood kids would frequently go down there and dive and just hang out. And when this happened, they started hassling all the neighborhood kids.”

Nishiki said condo owners and security guards would tell the kids that they couldn’t be down there, “even though they were on public land.” She said her family once walked down to the sand to watch the sunset and were approached by cops who said they could be arrested. Other community members had similar experiences, Nishiki said. Surfers would be out waiting for waves and see cops on shore waiting for them to get back in.

Both West Maui groups wrote to the Kuleana II representatives to try and resolve the issue. Nishiki said she spoke with the condo management but that “they were not very responsive” and told her if they saw her down there, they would call the police. She also contacted the state and county but was told they were too busy and overworked. It’s why community members finally decided to file the lawsuit, Nishiki said.

“We just knew that we had to take it into our own hands if there was anything to be done about it,” Nishiki said. “We compiled a list of shoreline access points that the community really felt were like the top areas we wanted to work on. We have probably over 15 or 20 spots that we are going to pursue regaining shoreline access to that have been lost to condominium and resorts privatizing the shoreline. This was one of the priority items.”

Nishiki mainly hopes the lawsuit will result in public access being restored. She said there isn’t a lot for kids on the west side to do, and one of the best activities to keep them out of trouble is going down to the ocean to fish, surf and dive.

“I really want this area to be for our community once again, and not just for the paid guests of the resorts,” she said.

Lance Collins, attorney for the two groups, said that “whether it’s overwatered naupaka or fencing and concrete, the public owns the shoreline and has a right to access it.”