Parcel originally was approved for a 500-room hotel 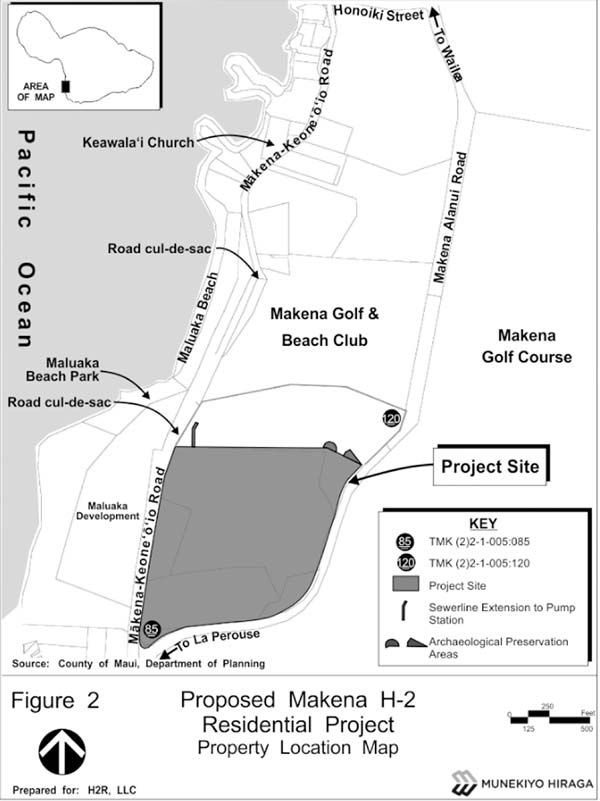 A map shows the location of the proposed H2R 53-lot development in Makena. MUNEKIYO HIRAGA map

A roughly 28-acre Makena lot that had a 500-room hotel in the works will instead be converted to 53 residential lots under a proposal by its new landowners.

Construction cost is $17 million, according to Ryan Churchill, president of Pacific Rim Land Inc., which is managing the project. With approvals, the plan could start in the first quarter of 2021 and last about a year, he said Tuesday.

H2R, owned by Everett Dowling, Steve Goodfellow and Rod Olson, bought the property in 2018 from Hawaii Development for about $20 million. The parcel under previous landowners had approval for a 500-room hotel, H2R said.

The current proposal involves roadway, electrical and power pole relocation improvements along Makena Alanui and Makena-Keone’o’io roads, both of which are public and county-owned.

Work for each road includes a new curb, gutter, sidewalk and shared bike lanes, along with moving power poles and other modifications.

A 50-stall beach parking lot near Maluaka Beach will be relocated about 150 feet north, closer to beach access, and have a 6-foot rock wall, according to the report. The new beach parking lot will be built before the existing one is demolished to minimize impacts to users and the surrounding community.

The project site, bounded by Makena Alanui Road to the east and south, Makena-Keone’o’io Road to the west and Makena South Golf Course hole number 17 and the Makena Golf and Beach Club site to the north, is designated urban by the state Land Use Commission, and zoned “H-M, Hotel” by the Kihei-Makena Community Plan and the county’s zoning rules.

The project must receive special management area and construction plan permits, along with the state environmental assessment. Individual lots would be developed by each owner. Total construction cost of the project, including the single-family homes for which owners will shoulder the costs, is estimated to be $128 million, the report said.

The project is open to public review and comment through March 24. Send comments to the approving agency: the county’s Department of Planning (for the Maui Planning Commission), Ann Cua, Ann.Cua@co.maui.hi.us, 2200 Main St., One Main Plaza, Suite 619, Wailuku, HI 96753.