Open house celebration to be held at facility Thursday 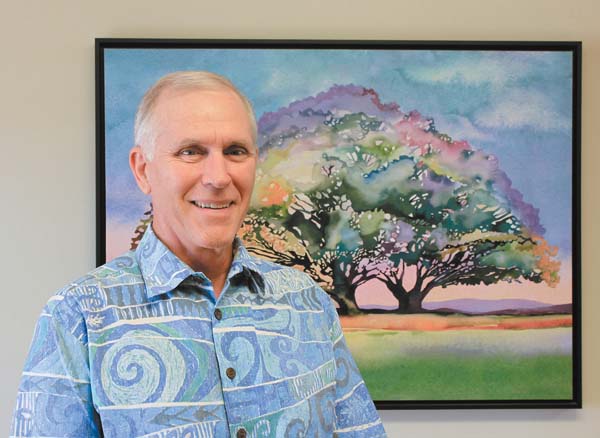 Greg LaGoy – Tenure has been ‘challenging’

WAILUKU — In the last months, weeks or days of someone’s life, Hospice Maui CEO Dr. Gregory LaGoy wants the patient to feel comfortable, dignified and cared for, a mission that dates back almost four decades.

Now the staff, patients and community members who’ve benefited from his care will give back to him. From 4 to 6 p.m. Thursday, an open house celebration for LaGoy’s 30th anniversary will be held at Hospice Maui, located at 400 Mahalani Street in Wailuku.

Looking back at his “rewarding, but challenging” tenure, LaGoy said that the quality of life for the patient has always come first, which is why he’s learned every detail he can about operating a hospice facility.

“My time here has been rewarding because I’ve gained such diverse knowledge and skills,” LaGoy said Tuesday afternoon in his office. “In order to make me feel like I’m really contributing to the care of the people who need hospice care on Maui and contributing to the needs of the staff who are the middle of it, I’m often working in areas that I didn’t have education or training in, and I’ve had to do things to get myself up to speed, so it has been a time of continuous learning.”

LaGoy also served on the Maui Memorial Medical Center ethics committee for nearly 20 years, and in 2002, he received Maui’s Executive Director of the Year award. Twice, Hospice Maui has been named as one of Hawaii’s “Best Places to Work” by Hawaii Business magazine. 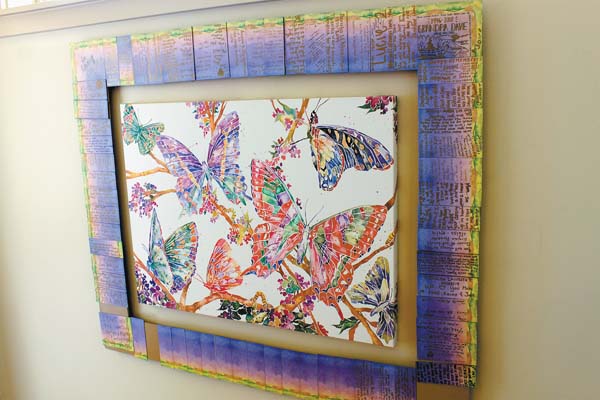 Handwritten notes made by loved ones adorn a painting in the Hospice Maui Hale five-bedroom inpatient facility. After six months to a year, the notes are mailed to the patient’s family for keeping. The Maui News / DAKOTA GROSSMAN photo

Hospice Maui has provided physical, emotional and spiritual support for patients since 1981. Part of the organization’s mission statement is to also prepare the families or friends for the death of a loved one by bringing “compassion, insight, courage, humility, inspiration, confidence and growth” to everyday care.

“I think one thing that is outstanding about us is we attract and hire people who are very passionate to do this work, taking care of people in the last part of their life,” LaGoy said.

Sitting atop a 4-acre property just up the road from Maui Memorial Medical Center, Hospice Maui has been a Medicare-certified provider of hospice care for nearly 40 years, offering visits by nurses, social workers, counselors, physicians, nurse aids and volunteer respite caregivers to wherever the patient calls home — their personal residence, a nursing home, on-site or in the hospital.

The amount of visits varies depending on the patient’s needs.

The organization treats symptoms of diseases, not the terminal illness itself, focusing on the “comfort of the patient and the family.” Free weekly bereavement support meetings are also offered up to a year after the death of a loved one.

“It’s actually the only altruistic care because treating the disease of the patient includes the physical, physiological, emotional and spiritual health, and the health of the family as well,” he added. “One of the main parts of what we do is carefully assessing what the patient and family wants, what is the goal, and how we can help meet those goals, what are their medical needs, how can we meet their medical needs.”

Growing from seven staff members to 70 and from a budget of $180,000 to $6 million a year, the organization has sought to support as many patients and families as possible. In 2019, Hospice Maui admitted 465 new patients in addition to the 80 already receiving support at the time.

The Hale includes a kitchen, a living and dining room, a children’s play corner and laundry and storage rooms, as well as a meditation room and seven bathrooms, including three private bathrooms.

During the first year of operation in 2016, the facility served 80 patients. Last year, LaGoy said they admitted about 141 people, with an average of four beds in use.

When LaGoy first joined the organization, he said that “it allowed me to get involved with something that was growing and changing,” such as handling building transfers, adding new staff, admitting more patients, expanding the facility and nurturing the perception of death and dying.

The idea of losing a loved one and dealing with loss is perceived and handled in a variety of ways, LaGoy said. Initially, the community was not as open to, or perhaps intimidated by, the services that hospice provides for people experiencing either.

“Unsurprisingly, people don’t like talking about the end of life,” he said. “Trying to talk to people about the value of what we do here did seem like rowing a boat upstream. It was just very difficult.”

LaGoy realized that understanding the value of hospice care was something that would have to slowly grow within the community, one family or one person at a time, since it was relatively new to the Valley Isle.

Between technological advancements and the growing visibility of Hospice Maui, more people are becoming aware of the gentle and caring services of such programs.

“We treated thousands of patients and families, so tens of thousands of people on this island have been touched,” LaGoy said. “So if someone doesn’t know about what hospice does, they will know a friend or neighbor who will know and that changes the game. Hearing someone talk about their experiences in what we do has a level of credibility to it that you don’t get off a website.”

Medical technologies have improved treatment procedures, the development of equipment and devices and the overall quality of life for those with injuries and illnesses. It has also changed the length of time that someone is injured or sick, as well as “the time of their diagnosis until the time they’re ready for hospice,” he said.

“It might impact how long that is, but when we get somebody, because we rarely use technological aids, it has very little effect (at hospices),” he said. “The most impact we have felt from technology is communication technology. . . .

It keeps us very connected.”

Most of the medicine used to keep people comfortable today “has not changed very much” in the past 30 years, though one of the biggest shifts in the health care industry was the “Our Care, Our Choice” act, which went into effect on Jan. 1, 2019, and gave terminal patients in Hawaii the legal choice to request prescription medication to end their lives early.

Four Maui patients have contemplated the choice, but only one was medically assisted last year on the family’s own terms. Such medication is not allowed in the Hospice Maui Hale inpatient facility.

“We are here to support those who are dying, and if they want to speed that process up, we are just here to make sure they are as comfortable and as dignified as possible regardless of that detail,” he said. “It is not for us to judge whether or not they choose that option. It’s only for us to support people in whatever they want to do.”

Because medically assisted suicide is a controversial topic, Hospice Maui’s policy is that staff members do not participate directly.

Looking ahead, LaGoy plans to ask the County of Maui to again lease the property to Hospice Maui for another 55 years; about 24 years remain of the original 55-year lease.

Additionally, at the corner Mahalani Street and Mahalani Parkway, lies an unused 3/4-acre lot next to the facility. LaGoy said he will be proposing to donate the lot back to the county and ask for a change in zoning laws — from recreational to public-quasi-public — in order to consolidate the small lot with the rest of Hospice Maui’s 4-acre property.

If the 3/4-acre parcel is added, there are three possible plans that LaGoy hopes to implement: a meditation garden, a care coordination center for staff or an extension of the parking lot.

“We’re obviously making do without it at the moment, but we would like to be able to develop it in accordance with our mission as time went on,” he said.