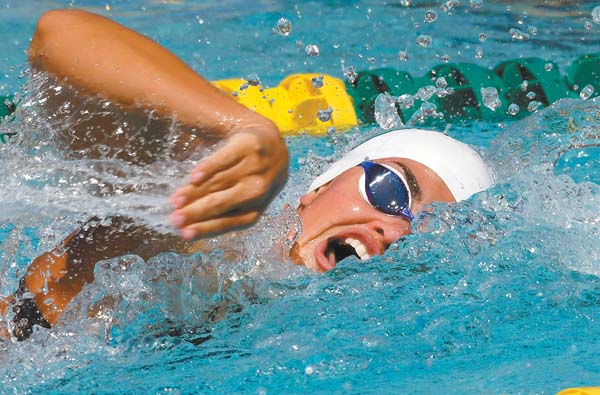 KIHEI — She had already captured the only two individual gold medals for the Maui Interscholastic League at the K. Mark Takai/HHSAA Swimming and Diving Championships, but the best moment of the day for King Kekaulike High School’s Aniston Eyre was easy to pinpoint.

It came as she hugged and smiled with her teammates after bringing Na Alii’s 200-yard freestyle relay to victory late in the meet on Saturday afternoon at Kihei Aquatic Center.

It was a thrilling anchor leg by Eyre — crowned the 50 and 100 freestyle state champion earlier in the meet — that brought Na Alii’s foursome from third place to the win in 1 minute, 39.18 seconds, 0.52 seconds in front of Kamehameha Kapalama.

Eyre led Na Alii to second in the team standings with 30 points — Punahou ran away with its fifth straight team title with 60 points.

“Awesome, amazing,” King Kekaulike sophomore Li’a Vanderpoel, the second leg on the state champion relay, said of Eyre. “She is, like, my idol.” 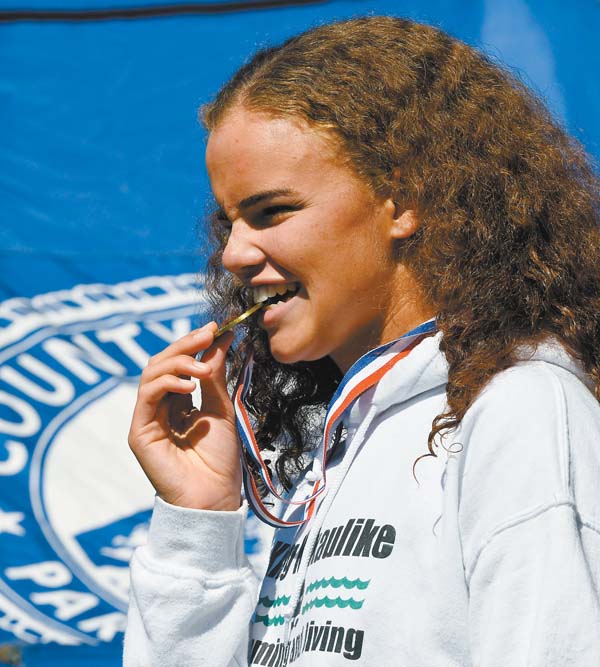 Aniston Eyre tests the first of her three gold medals while posing for photos on the awards stand Saturday.

Afton Page, a sophomore who swam the first leg, said: “It was amazing. I don’t think I’ve cheered that loud in my whole life.”

Third-leg swimmer Cecilia Buckingham, a senior, added “It was so awesome, we’ve been working since freshman year and it’s really amazing to see this dream come true.”

Eyre complimented her teammates as well.

“It was because of these girls right here,” Eyre said. “They got us that race that I needed there in that last 50 and I’m just, like, so happy right now. I’m proud of all of them, so much.” 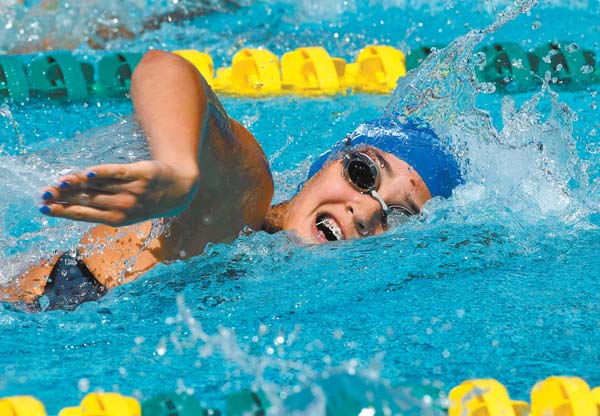 The MIL itself was looking at a second straight state swim meet without a gold medal until Eyre won a stirring race in the 50 free in 23.72 seconds, 0.23 seconds in front of Rose Garcia of La Pietra. Eyre’s time was 0.03 seconds off her lifetime best.

The individual state crowns were the second and third of Eyre’s career, to go along with the 50 free crown from 2018, also at Kihei Aquatic Center.

After the 100, she pondered her last day as a high school swimmer — she will swim collegiately at Columbia University next season.

“It’s really weird to think that this is my last high school meet,” Eyre said. “It’s amazing, it’s so great to come to these state competitions and have people to race and have best times to beat.” 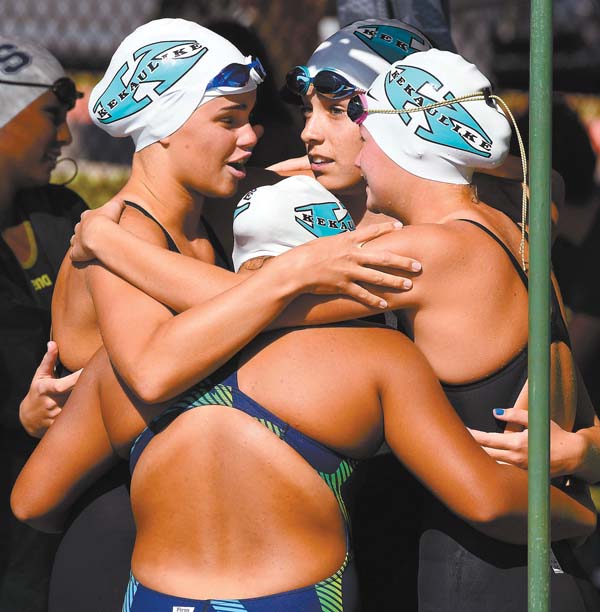 King Kekaulike’s Aniston Eyre (left) pumps up her teammates before the start of the girls 200 free relay. The team of Eyre, Li’a Vanderpoel, Cecilia Buckingham and Afton Page took first in the event.

She will arrive in New York City and the Ivy League with an end to her high school career that is nearly unbeatable. Now, she is focused on finishing her academic career on the Pukalani campus without ever having below a grade of A. With the strength of several Advanced Placement classes, her cumulative grade-point average is 4.29.

Saturday was a day she will never forget.

“Just to be back, just to be in my home pool here in Kihei,” Eyre said. “It is a really fast pool, it’s a pool I will remember throughout the rest of my life. I had my fastest swims in this pool.”

Anderson missed the MIL championships a couple weeks ago with a shoulder ailment. 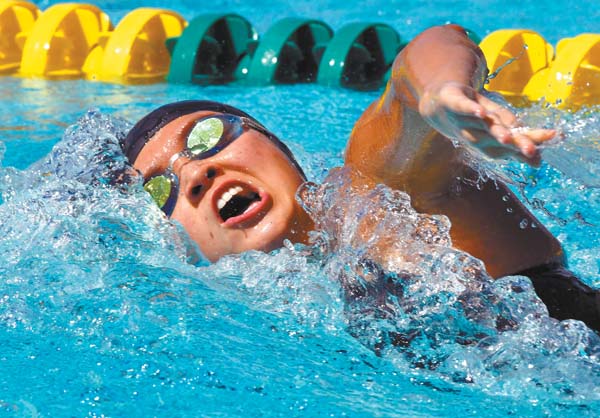 Baldwin’s Kylie Carter swims to a third-place finish in the girls 200 free.

Anderson, a state champion in the 100 butterfly in 2018, will continue her swimming career at San Diego State in the fall.

“It’s insane, it’s probably been the best racing of my life this high school season,” Anderson said. “I’m going to miss swimming in high school, but obviously I have another four years to go, so we’re just getting started. I’m so excited — I feel like I really found my match for a school. I’m getting to live the dream.”

Brown, a junior, said her results will drive her into next year. 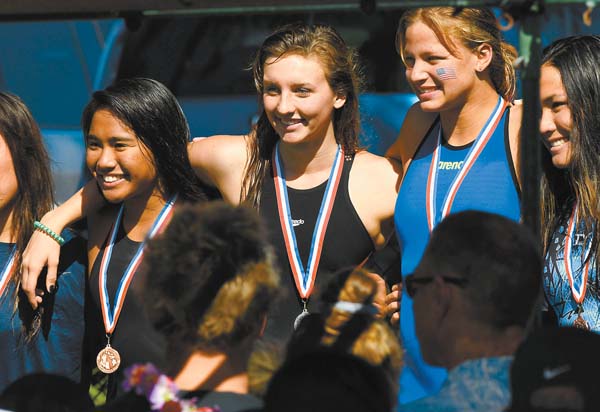 Lahainaluna’s Lexi Anderson (center) poses on the medal stand after her second-place finish in the girls 100 butterfly. Also on the stand are fourth-place finisher Elena Tanaka of Punahou (from left), winner Grace Monahan of University Lab and third-place finisher Kaya Takashige of Leilehua.

Seabury Hall’s Helena Colletta was third in the 500 free.

Two state records fell on the girls side.

“It feels good, you know, you train a lot during the swim season, so in a situation like that it really pays off,” Monahan said. “I wasn’t thinking state record. I was worried about my race, all the little stuff that goes into it.”

Le Jardin junior Alana Barthel broke the 100 backstroke record twice this weekend — going 55.53 in Friday’s preliminaries and 55.24 in Saturday’s final. The old mark was 55.73 by Christel Simms in 2009.

“I’ve never actually set one in high school before,” Barthel said of her record. “So, it’s pretty good. That was my goal going in.”

Lahainaluna’s Lexi Anderson swims to a second-place finish in the girls 100 butterfly with a time of 55.89. — The Maui News / MATTHEW THAYER photo

King Kekaulike’s Aniston Eyre acknowledges the cheers of her teammates as she is introduced before the start of the girls 50 freestyle final. She went on to win the event for the first of her three state gold medals Saturday at Kihei Aquatic Center. — The Maui News / MATTHEW THAYER photo 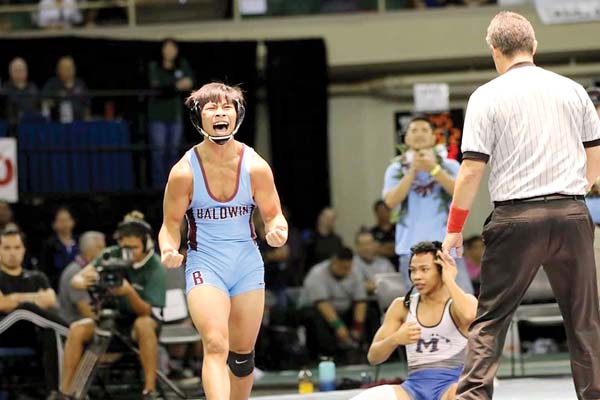 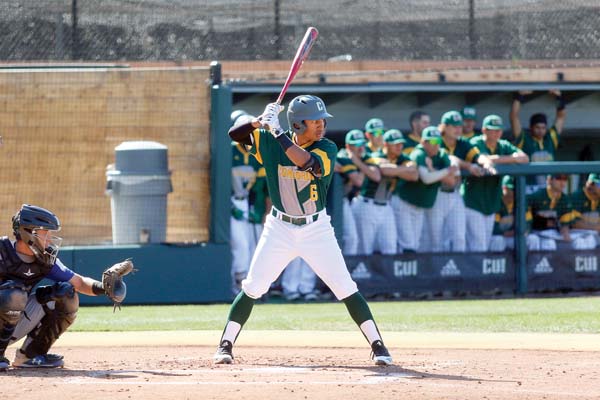 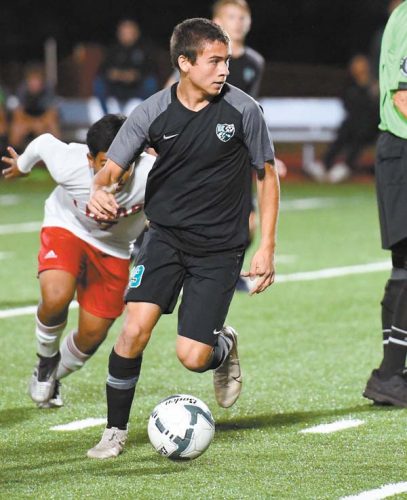 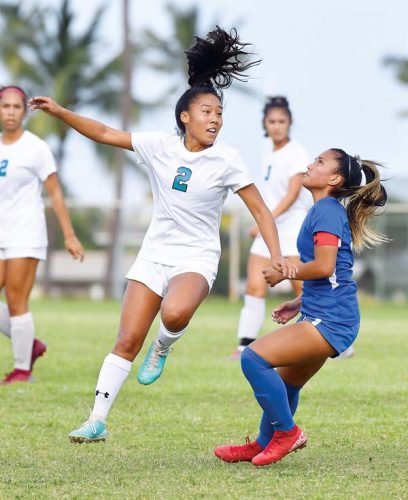