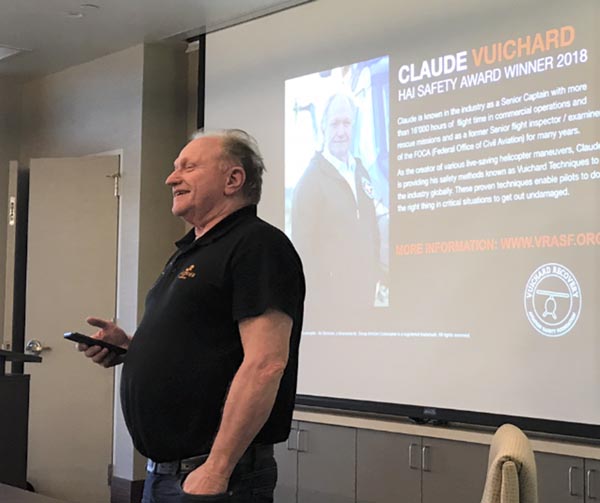 KAHULUI — While it still is unclear what caused the helicopter crashes that killed former basketball star Kobe Bryant last week and seven people on Kauai in December, a safety award-winning helicopter pilot noted that 85 percent of helicopter crashes are due to human error.

Swiss Capt. Claude Vuichard, known for developing multiple helicopter safety techniques, said Monday that the human error could be either skill- or decision-related.

The rest of helicopter accidents are because of mechanical and/or design problems, said Vuichard, before giving his technical talk to around 25 helicopter pilots, instructors and others Monday afternoon in a Kahului Airport conference room.

Vuichard, 63, who has decades of helicopter flight experience in the Swiss Alps, including search and rescue missions, is also giving a free talk in Kona today as part of the Vuichard Recovery Aviation Safety Foundation.

The talks are part of helicopter safety lectures Vuichard has been holding around the world in hopes of reducing helicopter accidents. The Hawaii talks are presented by Leocopter Air Services in collaboration with Mauna Loa Helicopters, Blue Hawaiian Helicopters and the Federal Aviation Administration Flight Standards District Office Honolulu.

Vuichard’s appearances come about a week after Bryant and eight others were killed Jan. 26 in a crash in Calabasas, Calif., and about a month after a Kauai tour helicopter crashed Dec. 26, killing all seven aboard in a remote and rugged coastline area.

Even with these high-profile accidents, Vuichard said helicopter travel is safe but said training and flying procedures need to be changed. Vuichard was sharing his Vortex Ring State Recovery procedure, which recently was included in the FAA Helicopter Flying Handbook.

An example of a high-profile accident involving the vortex ring state was the helicopter crash that occurred during the raid of Osama bin Laden’s compound in 2011, Vuichard said.

The vortex ring state describes an aerodynamic condition in which a helicopter may be in a vertical descent with 20 percent to maximum power applied — and have little or no climb performance, the FAA said.

When in the vortex ring state, helicopters experience roughness and loss of control because of the turbulent rotational flow on the blades and the unsteady shifting of the flow along the blade span, according to the copters.com website.

Vuichard’s methods to deal with the vortex ring state were published by the FAA in October in the Helicopter Flying Handbook.

During a break in the presentation,Vuichard said that he developed the various methods during his decades of flying in the rugged conditions of the Alps. He said his approach is more pragmatic than academic.

He offers courses and trainings and does not make money sharing his experiences. The class fees are used to fund his travel for the foundation.

His work led to him be honored with the Safety Award by Helicopter Association International in 2018.

For more information, go to www.vrasf.org.

AVERY CHUMBLEY “We are a motivated seller”