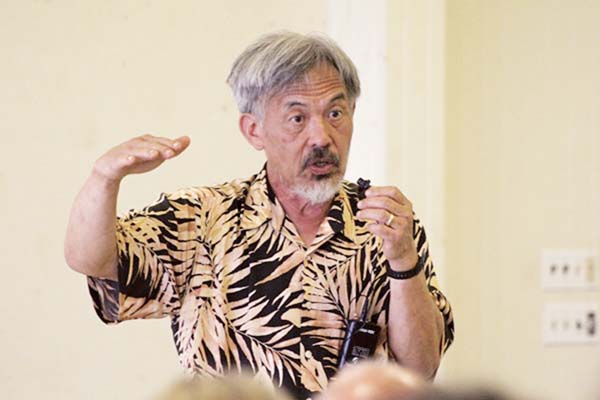 A Japanese man, who later tested positive for the novel coronavirus, did exhibit some early symptoms of the illness while on Maui earlier this month, according to a state health official.

Dr. Lorrin Pang, state Department of Health Maui District officer, said Tuesday that follow-up interviews by the Japanese government’s ministry of health revealed that the man had experienced symptoms while on Maui, though the types of symptoms were still unknown.

State officials had originally said Friday that the man, who stayed on Maui from Jan. 28 to Feb. 3, only showed cold-like symptoms but no fever during his time on Oahu from Feb. 3 to 7. However, Pang said that people sometimes have different definitions of symptoms, and it helps to continue asking.

“Since we’re looking in the hotels and the rental cars and their activities, we may as well just look since they arrived,” Pang said. “Maybe they were not sick and spreading it, but there’s always the chance that maybe they got it on Maui or Japan or the airlines coming over.”

Pang said he could not determine how many days the man had been symptomatic on Maui because he did not interview the patient firsthand. As it is, the department is relying on Japan’s ministry of health to follow up with the couple and relay the information to the state and the Centers for Disease Control and Prevention. 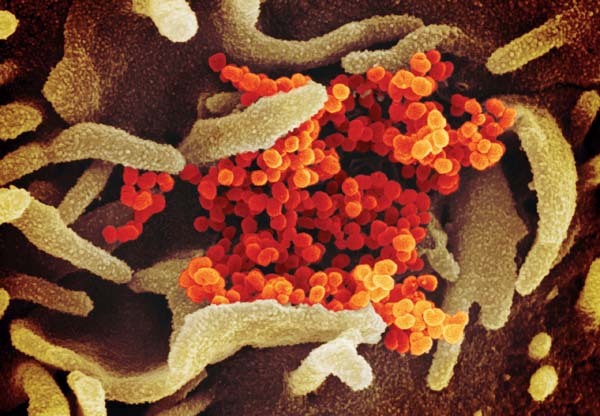 This electron microscope image shows the Novel Coronavirus SARS-CoV-2 (orange) emerging from the surface of cells cultured in the lab this month. Also known as 2019-nCoV, the virus causes COVID-19. The sample was isolated from a patient in the U.S. US National Institutes of Health photo via AP

However, Pang said that “it’s the conservative thing to act on it even though I don’t know how long.”

The man is now in critical condition, according to Lt. Gov. Josh Green, and his wife, who traveled with him, also has been diagnosed with the virus.

Now known as COVID-19, the virus that broke out in Wuhan, China, has put other countries on high alert, with more than 73,000 cases reported globally and just under 2,000 deaths as of Tuesday, according to The Associated Press. Symptoms include fever, coughing and shortness of breath, and can appear in as few as two days or as long as 14 days after exposure.

Hawaii has not had any confirmed cases, and 42 people were under self-monitoring as of Tuesday, meaning that they had traveled to China outside of Hubei province. One Hawaii resident who traveled to the province is still under a two-week quarantine on Oahu.

On Maui and Oahu, health officials are trying to retrace the Japanese couple’s steps and track down anyone who may have come in contact with them during their stay. On Oahu, the couple reportedly stayed at the Grand Waikikian by Hilton Grand Vacations and flew home on Delta Flight 611 from Honolulu to Nagoya, Japan.

On Saturday, the department informed the Ka’anapali Beach Club that the Japanese visitors had stayed at the hotel, according to General Manager Fred Mayo, who said in a letter to employees Sunday that “we have no reason at this time to believe there was any spread of infection” because health officials believed at the time that the man had shown no symptoms.

“While the guests left the resort 13 days ago, which is approaching the 14-day observation period that the Centers for Disease Control and Prevention (CDC) recommends, we are working in coordination with the Hawaii Department of Health to protect our members, guests and staff,” Mayo said.

He added that the hotel would be undertaking “an enhanced cleaning of our entire resort.” He told employees that if they experienced any cold-like symptoms, they should stay home from work and visit their doctor. The hotel also is offering to arrange free COVID-19 screenings with the Health Department.

A Diamond Resorts spokesperson was unable to answer additional questions about the cleaning process and whether the couple’s room had been used afterwards, but reiterated that the hotel would be “working closely with the Hawaii Department of Health and adhering to their guidance and instructions.” The Ka’anapali Beach Club is a Diamond Resorts property.

Maui County spokesman Brian Perry said Tuesday that the couple had rented a car from Alamo. A branch manager at the Kahului Airport said Tuesday evening that they had no official comment.

Meanwhile, Hawaiian Airlines confirmed that the couple had taken Flight 265 from Kahului to Honolulu on Feb. 3. There were five crew members and 82 passengers aboard, airline spokesman Alex Da Silva said.

“We are cooperating with public health agencies to support notification of passengers as they deem necessary,” Da Silva said Tuesday. “We also contacted our crew and agents, who operated the flight, to make sure they are supported and healthy. Our planes are cleaned with disinfectants after each flight and nightly.”

Da Silva said that the planes’ cabin air is cleaned through “high-efficiency particulate air (HEPA) filters that create a dry and sterile environment inhospitable to the growth of viruses.”

“Our airport agents and crew members are trained to identify and assist any passenger who may show symptoms of being ill, while minimizing the risk of exposure to themselves and others,” Da Silva said. “Medical authorities continue to urge the practice of simple, everyday habits to prevent viral spread: hand-washing, use of at least 60 percent alcohol-based sanitizer, not touching your face with unclean hands, disinfecting common areas and staying home when sick. We encourage all our passengers and employees to heed this advice.”

Pang said the department is working to determine where and when the couple passed through on island, who they may have been in contact with directly or indirectly and whether those people are sick.

“We’re doing this against a backdrop of flu and colds, so behind all this stuff, you’re trying to pick out this novel coronavirus,” Pang explained.

The companies identified as having interaction with the couple are putting together lists for health officials to interview, and Pang said they’d gotten through 15 people as of Tuesday and had another dozen people to contact.

A couple of people have shown some symptoms of respiratory illness, but based on the timing, they likely got sick before they came into contact with the Japanese couple. They were told to stay home and are being monitored to ensure that they do not have the virus and were not the ones who passed on the sickness.

Health officials also have talked to people who might have caught the virus from the Japanese visitor, but it’s been 14 days since they were exposed, and they haven’t been sick, Pang said.

Pang said the department was able to determine fairly quickly the name of the hotel and the rental car company, but that other activities and restaurants have been harder to pin down because the interviews are going through the state to the national level to the Japanese government to the couple and back. He said they know of one activity the couple engaged in but are trying to find out the name of the company.

When asked why the department did not release the names of the hotel and rental car company as soon as they found out, Pang said they were leaving it up to the businesses to put it out themselves. He added that informing people might give them “a false sense of security to slack off when it’s not that hotel.”

“Tell me what you plan to do with that information — avoid that hotel?” Pang asked. “Stop washing your hands when you use other hotels and just blow it off when it’s the other car company? In the background of influenza — 20 million cases in the U.S. and 10,000 deaths?”

Pang said that in the ambient temperatures of Hawaii, viruses don’t last as long, perhaps six hours tops, but in air-conditioned spaces, maybe 12 hours. So, in a room or car where the couple may have been, the air conditioning is turned off to let things air out, he said. While it may be difficult to sanitize a whole room, surfaces and other places that people might touch or use can be cleaned, and all employees with respiratory illness are told to stay home.

“I don’t think we should panic just because it’s been identified that this one Japanese couple stayed on the west side and Ka’anapali Beach Club,” Paltin said. “I think a better practice than freaking out about that is just to assume that there’s people out there with any kind of contagious disease — and you can’t tell based on looking at people — so just protect yourself, and don’t rely overly on the government.

“Of course, that doesn’t mean don’t hold the government accountable, but also take your own precautions.”

This electron microscope image shows the Novel Coronavirus SARS-CoV-2 (orange) emerging from the surface of cells cultured in the lab this month. Also known as 2019-nCoV, the virus causes COVID-19. The sample was isolated from a patient in the U.S. US National Institutes of Health photo via AP