The restoration became a demolition, upsetting members of community 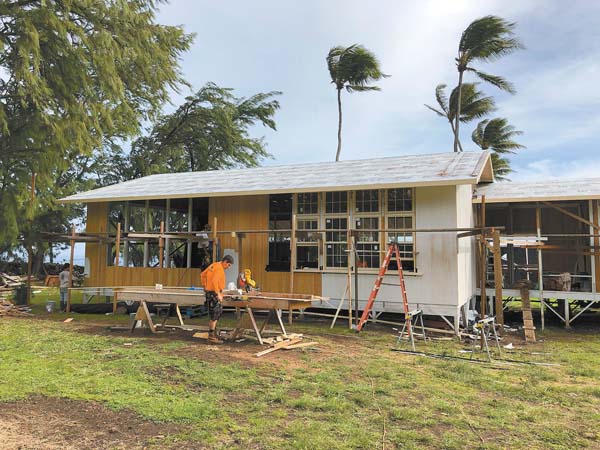 The new Kaupo School building is pictured under construction in January. The near century-old schoolhouse was demolished after project officials decided it was beyond saving, upsetting some residents. Now, the community is hoping the project can move forward again with more transparency and accountability on the part of the Kaupo Community Association board. Photo courtesy Jonathan Starr

After the unexpected demolition of the old Kaupo School prompted an outcry among the small East Maui community, officials and residents agreed Saturday to move the project to create a community center forward under a more transparent system.

A gathering of about 52 residents in Kaupo on Saturday voted unanimously to accept a new community engagement protocol that they hope will provide better accountability and cooperation as they work to repurpose the old schoolhouse.

“In hindsight, there were things that could’ve been done better,” said Kauwila Hanchett, treasurer of the Kaupo Community Association, who is serving as the community liaison moving forward. “We were working so hard to bring the project together and make things better that we had missed involving the community in the appropriate way.”

Community members had long wanted to see the historic schoolhouse restored and used as a community center and emergency shelter. But after project officials decided during the restoration that the building was too rotted and dilapidated to be saved, it was torn down and rebuilt. Residents said they weren’t properly informed, and the county Planning Department, which believes that the building could have been saved, has issued a stop work order.

Planning Director Michele McLean said that the county still needs “to reconcile the underlying basis that allowed us to give approval in the first place, which was restoration of a historic site.” 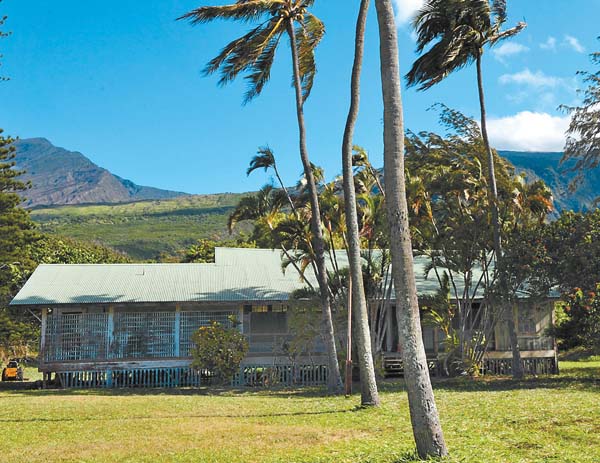 Kaupo School is pictured in 2017. Residents have wanted for years to restore the schoolhouse and use it as a community center. Photo courtesy Jonathan Starr

“Since that was supposed to be the principal use, we have to find another way to allow it, which may end up being a state special permit and a use determination by the Maui Planning Commission,” McLean said. “We could let them continue while they pursue those approvals.”

Hanchett said that association board members have been listening to resident concerns. They put together a community engagement protocol that promised more transparency by making construction plans, architectural drawings and other project documents more accessible to the community; more accountability, through a Project Implementation Plan and monthly updates; and better communication, through monthly updates and board member interaction with residents and local organizations.

Hanchett said that in the next week or two, they’ll be putting together a Project Implementation Plan that will include “all planned construction activities and any other significant activities planned that impact the project.” Any changes must go before the Restoration Committee, which is open to anyone who is a Kaupo landowner, resident or descendant of kanaka maoli of Kaupo.

Project architect Jim Niess also sent out a mitigation report Feb. 6 detailing how the project originally began as a rehabilitation but was forced to switch course after initial work revealed that rot and termite damage had compromised “the critical joint between the siding and the floor.”

Once the siding was removed, Niess said that project officials realized that the floor wasn’t level; the structural integrity of damaged posts, girder beams and joists was beyond repair; and the foundation stones, with no vertical hold downs, did not meet building code requirements for earthquake resistance. 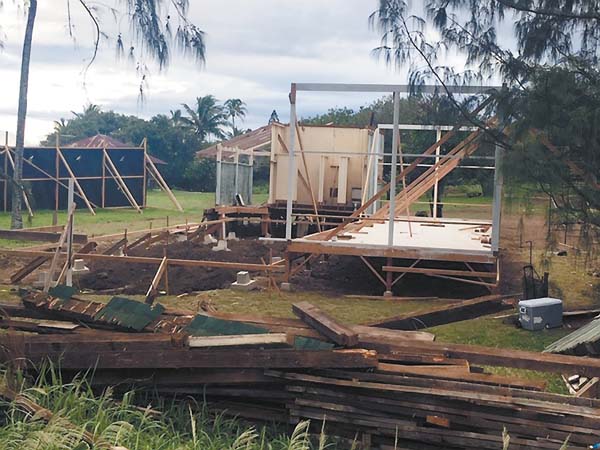 The remains of the Kaupo School building are shown in October. The historic schoolhouse was demolished after project officials decided it was beyond saving, but residents said they weren’t properly informed. Photo courtesy of Alohalani Smith

Having to take down and reconstruct the building was necessary, but “obviously, justifiably upset some members of the Kaupo community,” Niess said.

“In retrospect, there should have been more of an effort to keep the community informed of such a dramatic change of course,” he continued. “For this oversight, I deeply apologize to the community and hope we can move forward together with the project.”

Niess said the reconstructed building will be an accurate and safe replica of the original schoolhouse.

Hanchett said the work is about 70 percent complete, and that the association plans to meet with the county this week to discuss lifting the stop work order. Permits are also ready for the next phase of the project — the teacher’s cottage.

“It hasn’t been touched yet, but it has similar issues to the school, so it’s almost like we have a second chance to do this in a better way,” Hanchett said.

The third aspect of the project will be an infrastructure hub, which is still in the drawing stage. Because the school is being rebuilt to match its historic characteristics, a separate facility will be constructed to house modern amenities like solar panels, generators, water tanks and a purification system, as well as bathrooms and showers, allowing the area to serve as a staging ground for emergencies.

Hanchett said the goal is to finish the project before funding runs out. In 2016, the state Legislature approved $975,000 in grant-in-aid funds for the restoration of the school and the cottage; those funds expire in September. The Hawaii Historic Foundation has also provided a $70,000 grant to install replica windows and doors on both buildings.

Maui County allocated $475,000 for the project’s infrastructure; those funds expire at the end of the current fiscal year on June 30. Hanchett said they could get an extension if needed and that installing infrastructure is more straightforward than the restoration of historic buildings.

Alohalani Smith, Kaupo representative on the Aha Moku Maui Island Council, was a bit skeptical of the association’s community engagement protocol but said it was “something to work with.”

Smith said she wants to see an investigation, not just by the state Department of Land and Natural Resources, which has already launched an investigation, but also by the county to better understand how the project went from restoration to demolition to a rebuild. She said that people are still upset over what happened but that Saturday’s meeting helped.

“They don’t want to fight about it,” she said. “They want to move forward.”

Hanchett, who grew up in Kaupo, said the community can’t afford to be fighting.

“We know we need a place for our community,” she said. “The kupuna that went to school there, they want to see the building completed in their lifetime. We are very isolated in Kaupo, and we know that we need to take care of one another. We really can’t afford to have our community divided.”

The remains of the Kaupo School building are shown in October. The historic schoolhouse was demolished after project officials decided it was beyond saving, but residents said they weren’t properly informed. Photo courtesy of Alohalani Smith

Kaupo School is pictured in 2017. Residents have wanted for years to restore the schoolhouse and use it as a community center. Photo courtesy Jonathan Starr

The new Kaupo School building is pictured under construction in January. The near century-old schoolhouse was demolished after project officials decided it was beyond saving, upsetting some residents. Now, the community is hoping the project can move forward again with more transparency and accountability on the part of the Kaupo Community Association board. Photo courtesy Jonathan Starr

This photo of the Kahoolawe brush fire was taken off Lahaina on Sunday night. OUIS RHEAUME photo

The Maui Fire Department estimates that 5,400 acres of brush has burned on Kahoolawe as of 10 a.m. Monday. The fire broke out Saturday morning, but crews are unable to fight the fire because of hazards posed by unexploded ordnance on the former military target island. Maui Fire Department photo

The Maui News WAILUKU — A man and woman were arrested when police reported finding quantities of drugs and a ...