Separate study initiated by state Rep. Tina Wildberger has yet to be reported 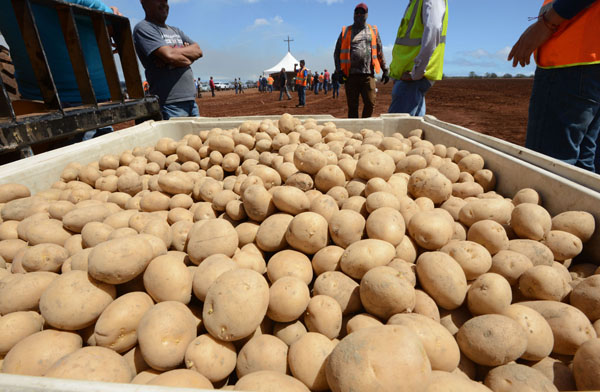 A bin of potatoes waits to be planted after a blessing at a Mahi Pono field in August. About 1,000 potatoes were planted in each acre with an expected yield of between 10,000 and 30,000 potatoes per acre. Third-party testing of Mahi Pono’s potato harvest showed no pesticide residuals. The Maui News / MATTHEW THAYER photo

PUUNENE — Amid questions over farming practices and the quality of its produce, third-party testing of Mahi Pono potatoes for 400 chemicals shows that they are free from pesticide residuals and safe for eating, the company said.

A standard Food and Drug Administration panel test of about 400 chemicals was requested by Mahi Pono and performed. Separate assessments for diquat and paraquat, pesticides that are restricted but legal for use in Hawaii with state-certified applicators, also were performed.

All studies came back clear Jan. 31.

In looking at the results this week, Maui District Health Officer Dr. Lorrin Pang said that none of the hundreds of chemicals were detected, adding that labs must report their limits of detection at a minuscule 0.02 parts per million. 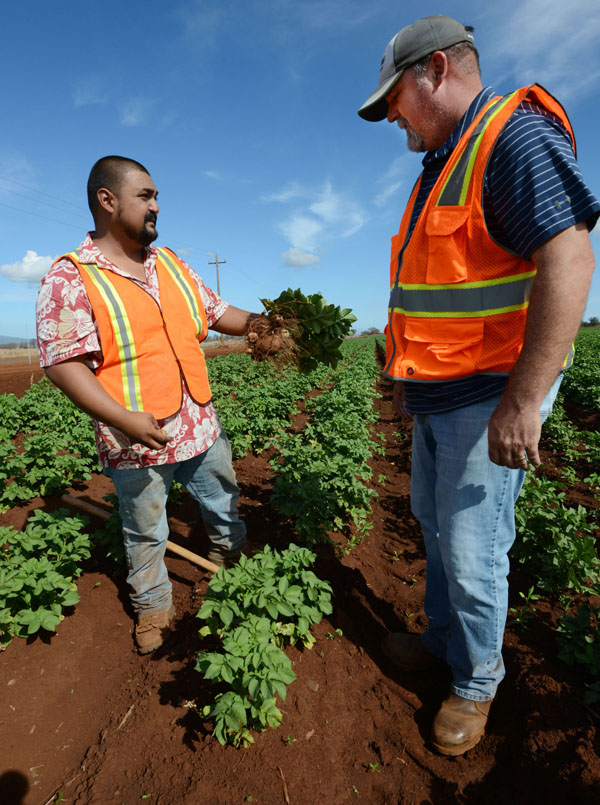 Mahi Pono’s Darren Strand (right) and Justin Teixeira inspect potatoes clinging to the roots of a plant in October. The young spuds were planted as a single potato nine weeks earlier and were about two weeks away from being ready to harvest. The Maui News / MATTHEW THAYER photo

Mahi Pono, a joint venture between a California farming company and a Canadian pension fund, acquired 41,000 acres of former sugar cane land from Alexander & Baldwin more than a year ago.

Since its formation, the company has been under scrutiny for land and water practices. Mahi Pono continued to pursue its vision and goals, and last week, the company’s farming officials discussed plans to put more than 700,000 trees in the ground this year as it moves to diversify agriculture on parcels historically used for monocropping of sugar cane. The trees include citrus, coffee and breadfruit.

Once the commercial potato harvest begins in mid-February, Mahi Pono is aiming for 50,000 pounds of potatoes per week. It is in the process of building and enclosing a new potato processing plant.

Meanwhile, results from a separate study on the potatoes initiated by state Rep. Tina Wildberger of South Maui has yet to be reported, she said last week. She declined to disclose the company assessing the potatoes, the methods of testing or the estimated timeline for results.

Wildberger said she is having Mahi Pono’s first round of potatoes tested because of soil quality concerns raised by people in the community.

“The impetus for having the potatoes tested came out of community concern for the condition of the land in the valley after 100-plus years of undisclosed chemical application, since the only remediation that has taken place was the fires last year,” she said in an email.

Mahi Pono said fires were not part of a soil remediation plan. Maui police and fire officials have said weather conditions and arson incidents contributed to a record number of wildfires last year, with much of the central plains impacted.

Jacob Tavares, Mahi Pono livestock and land development manager, said that the company does soil testing in its fields.

“There is nothing wrong with the ‘condition’ of the land,” he said.

In recent interviews, Mahi Pono farming officials echoed that they comply with federal and state rules for conventional farming practices and that they use a licensed applicator for pesticides.

The company’s use of weedkillers diquat and paraquat has raised alarms on social media and in reports in the Maui Time Weekly.

Both herbicides are regulated at federal and state levels due to toxicity and are legal for farming use in Hawaii with state Department of Agriculture approval. There are more than 10 paraquat licensees in the state, including Mahi Pono, according to the Agriculture Department.

Mahi Pono Senior Vice President of Operations Shan Tsutsui in a recent announcement said modern agricultural technology is coupled with “best practices” to create a long-term, tangible farming operation. He hailed the company’s move away from glyphosate or Roundup.

“Our goal is to produce high-yield, successful food crops that will ultimately help Hawaii achieve food security,” he said. “And we do all of this while fully complying with label standards and local laws regarding chemical use that helps to control weeds, prevent fungus and manage diseases and pests.”

Brian Miyamoto, executive director of the Hawaii Farm Bureau Federation, highlighted misconceptions about pesticide use in local farming practices and said he hopes the public can make informed, not fear-based, decisions about food choices.

The leader of the statewide ag organization with more than 2,000 members added that chemicals are highly regulated, which minimize risk in food products.

“The word ‘pesticide’ is so misunderstood that people don’t realize that they use them every day,” he said. “A pesticide is just any chemical, natural or man-made, that is designed to kill another organism.”

He said a lesser-known fact is that plants produce their own natural pesticides, such as nicotine, pyrethrins and rotenone, to repel insects that would otherwise harm the plant.

Other common misconceptions are that organic means no pesticides were used or that there is a nutritional difference between organic and nonorganic produce. Both are not true, he said.

Although farmers have various natural pest management practices, such as crop rotation, cover crops and using beneficial predator insects, Miyamoto said chemicals often are employed when there are “no effective alternatives” to keeping food and other products free of contaminating diseases and pests.

“Without the use of pesticides, our way of life would be radically different,” Miyamoto said, pointing to chemicals used to control mosquitoes, termites, cockroaches, little fire ants, centipedes, rats, snails and slugs (that spread rat lungworm disease). “When used according to label instructions and with other control measures, pesticides are an invaluable tool in managing invasive plants, insects and diseases.”

“Today’s stringent federal and state pesticide safety standards and harsh enforcement penalties help ensure that any risks are minimized,” Miyamoto said. “To meet federal standards, any potential residues in food must be at such tiny levels that the food is incapable of damaging the body, even if eaten in unrealistically large quantities over a lifetime.”

Mike Opgenorth, director of Kahanu Garden, shows an example of an educational display, where visitors can read about native plants and the island’s history inside the new Visitor and Education Center.

Students and contractors pose for a photo during the construction of the Kahanu Garden Visitor and Education Center. Photo courtesy of Mike Opgenorth

Snow coats the summit and roadways of Haleakala at about 6 a.m. Friday morning. A Thursday afternoon snowfall and an overnight winter storm blanketed the summit early Friday, marking a rare third year in a row of snow atop Haleakala. MIKE MABERRY photo

Molokai murder suspect Marlin Lavoie talks with his attorney, Keith Shigetomi, in 2nd Circuit Court on Friday. Lavoie is being held on no-bail status after he was returned to Maui for a new trial, following a Hawaii Supreme Court opinion vacating guilty verdicts in his case. The Maui News / LILA FUJIMOTO photo

Mahi Pono’s Darren Strand (right) and Justin Teixeira inspect potatoes clinging to the roots of a plant in October. The young spuds were planted as a single potato nine weeks earlier and were about two weeks away from being ready to harvest. The Maui News / MATTHEW THAYER photo

A bin of potatoes waits to be planted after a blessing at a Mahi Pono field in August. About 1,000 potatoes were planted in each acre with an expected yield of between 10,000 and 30,000 potatoes per acre. Third-party testing of Mahi Pono’s potato harvest showed no pesticide residuals. The Maui News / MATTHEW THAYER photo