Investments are being made to expand capacity 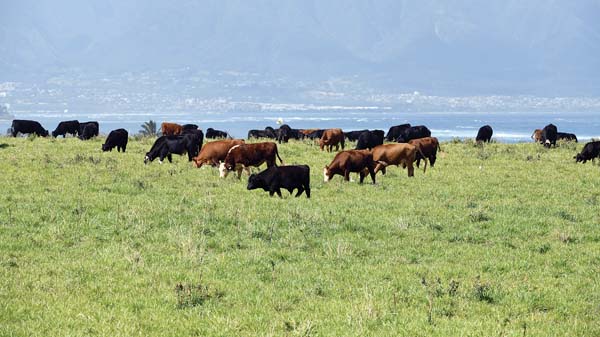 The 3,500-square-foot slaughterhouse is located in Puunene with 8 acres surrounding the facility for the cattle company’s composting operations and future expansion, he said.

Tavares did not disclose the cost of building the facility.

The new slaughterhouse can process a maximum of 25 head of cattle a day, Tavares said, adding that investments are being made this year to “significantly” expand capacity.

Tavares described how the expansion of cold storage was important for increased production. He explained that a carcass must sit in cold storage for about two weeks before being broken down into different beef products, such as steaks and hamburger.

“The reason for this essential ‘chill’ process, is for food safety and meat preservation primarily but also the positive influence that it has on meat tenderness,” he said.

So to increase production, “an increase in cold storage is required as well,” Tavares said. Currently, Maui Cattle Co. markets more than 10,000 pounds of Maui beef each week, a company news release said.

“As we look at expanding the amount of local beef in the marketplace, it will be vital that we develop the infrastructure needed to support that,” he said. “This is a major limiting factor in not only the local beef industry, but Hawaii’s agricultural industry as a whole.”