Kiwikiu in translocation on Maui die from avian malaria 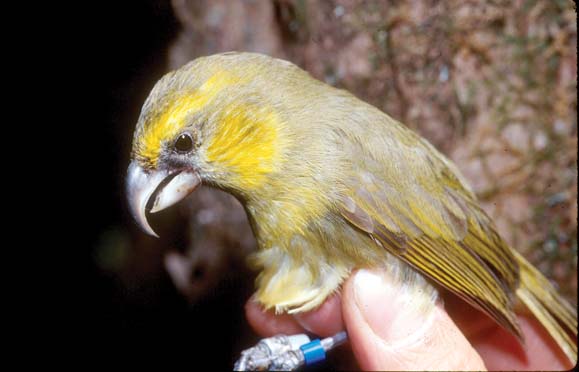 A team of researchers is trying to decide what to do next after an effort to translocate 14 captive and wild birds in the Nakula Natural Area Reserve on the slopes of Haleakala late last year failed. Only one bird survived and was placed back in captivity. National Park Service photo

PUKALANI — In the wake of a highly-anticipated translocation project that saw all but one of its 14 birds die on Haleakala, experts are mulling whether to move critically endangered kiwikiu to the Mainland or to the Big Island to save them from extinction.

Hanna Mounce, Maui Forest Bird Recovery Project project coordinator, detailed two options to again translocate the birds, possibly about 40, in efforts to save them. However, officials likely won’t decide on the next step for another month.

Time is running out for the native kiwikiu, or Maui parrotbill, known for their colorful feathers, strong beaks and melodious sounds. Once found all over Maui and Molokai, the birds are now the most endangered honeycreeper on Maui and possibly in the nation, with fewer alive than recently thought.

Mounce’s talk at the Friends of Haleakala National Park meeting in Pukalani was the first public presentation since the initial translocation, a culmination of about a decade of work from public and private agencies at national, state and local levels. 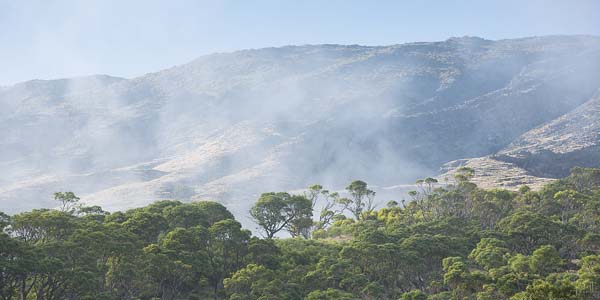 Years of effort went into preparing the Nakula Natural Area Reserve on the leeward side of Haleakala for the introduction of endangered kiwikiu. Unfortunately, mosquitoes reached the 5,000 foot elevation of the reserve and passed on avian malaria, which killed most of the birds. Maui Forest Bird Recovery Project photo

In October, 14 captive and wild kiwikiu were moved to reforested state land at more than 5,000 feet elevation on Haleakala’s leeward side in the Nakula Natural Area Reserve. Despite mosquito surveys and lots of work to mitigate other threats like predators, officials said 13 died or were assumed dead due to avian malaria (one captive bird showing signs of avian malaria was moved back to its zoo facility and is now “doing great”).

Mounce said mosquito surveys quickly recommenced and showed anywhere from 7 1/2 to 28 times more mosquitoes than just a couple years earlier. Methods to battle avian malaria are about five years out, she added.

“The abundances blew our minds,” Mounce said, pointing to climate change. “To have that kind of increase in two years time was just astronomical.”

Two Mainland zoos equipped with state-of-the-art resources are willing to take the birds this year, Mounce said. There, an unknown percentage of the population, possibly 40 individuals, would be in a “safe haven” until local threats are mitigated and rerelease can occur.

“That’s super scary to some people,” Mounce said. “Moving birds to the Mainland is scary.”

She added that translocating birds to the Big Island, considered an option because of its higher forest elevations suitable for the birds, has its own environmental risks that would likely require more than a year to prepare.

“We have to figure out how these birds would interact with the Big Island endemics,” she said. “We also need to do mosquito surveys over there. It’s very possible that the Big Island has seen the same 29-time increase that we have seen on the leeward side.”

Now is a time of regrouping since the translocation didn’t work, Mounce said. Officials from multiple agencies will meet again in four weeks to determine the next step.

The kiwikiu translocation project is a decadelong effort involving the Maui Forest Bird Recovery Project, which is leading the project, and the state Department of Land and Natural Resources Division of Forestry and Wildlife, San Diego Zoo Global, U.S. Fish and Wildlife Service and American Bird Conservancy.

“We’ve got a lot of people really fired up about the kiwikiu at the highest of state levels and the highest of federal levels,” Mounce said. “And so the movement on getting the tools to battle diseases and mosquitoes are moving forward a lot faster than ever before. That is really positive.

“And Haleakala National Park actually is one of the biggest partners that is pushing that forward and doing their own compliance and really trying to get that tool onto the landscape, which is amazing.”

• Wild birds did not care about feeders and preferred foraging in trees.

• Captive birds never foraged at all.

• Birds were equipped with trackers but some ripped them off.

• One of the 14 kiwikiu released into the reserve was not confirmed dead but is assumed to be dead.

• On average, birds survived about two weeks; one bird survived at least 38 days; one bird died after seven days.

• Captive birds all died quicker and scientists are not sure why.