Local visitor industry could do well if the coronavirus stays away from Hawaii, Mainland 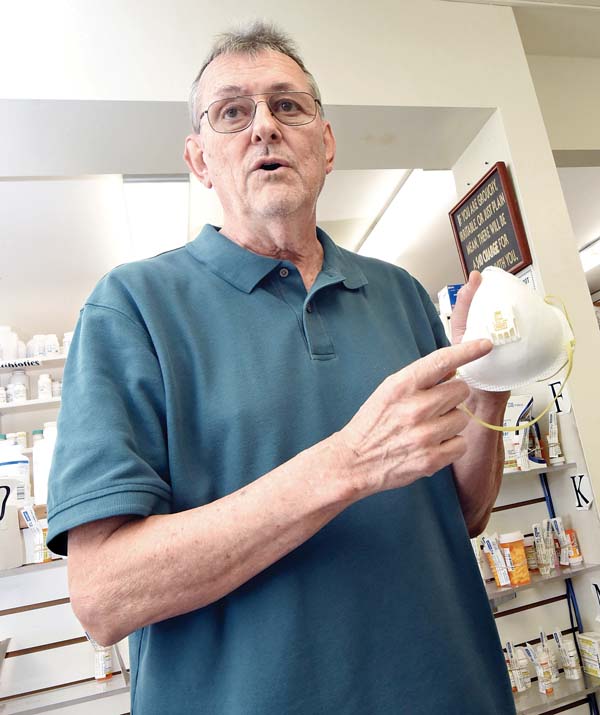 Pharmacist Les Krenk, owner of Maui Clinic Pharmacy, discusses some of the different types of masks he has available for sale. He said the price from his distributor has gone up three times in recent weeks. Masks have been in high demand as fears over the coronavirus have grown, though health officials continue to say that the risk in Hawaii is low. The Maui News / MATTHEW THAYER photo

Barring a widespread coronavirus outbreak in Hawaii or the U.S. Mainland, Maui’s tourism industry still could have a “strong year,” a top University of Hawaii economist said Wednesday amid rising global fears over the economic impacts of the growing pandemic.

Unlike Oahu, Maui doesn’t see high numbers of visitors from Japan or other Asian countries that have been most impacted by the COVID-19 scare.

Of Maui County’s more than 3 million visitors last year, only around 48,000 were from Japan, said Carl Bonham, the executive director of UH’s Economic Research Organization, or UHERO, which on Monday released a report that said Hawaii’s economy could be “hit hard” by coronavirus travel concerns.

Maui’s visitors, rather, come more from the U.S. Mainland. Of the more than 3 million visitors last year, nearly 2.5 million were from the U.S., according to Hawaii Tourism Authority statistics.

International visitors who come to Maui tend to hail more from Canada — of which there were almost 280,000 visitors last year — and even Australia, Bonham said.

“So long as the strength in the U.S. market remains, then you are in pretty good shape,” Bonham said of the Maui tourism market, which has also seen visitor numbers up in January and this month.

But, Bonham cautioned that it’s still early to tell what will happen with COVID-19.

“We’re not out of the woods, that’s for sure. It all bears watching,” he said.

The airline is assisting impacted guests by offering re-accommodations on alternative flights or providing refunds. Travel waivers also are being given to guests holding tickets on Hawaiian Airlines codeshare flights departing to, from or connecting via South Korean airports.

UHERO’s report, which covers the coronavirus impacts and the state’s first quarter forecast, said that the spread of COVID-19 comes as Hawaii’s economy has been on an expected slowing trend for the past several years.

The report notes that a recent Travel Weekly survey found that about half of surveyed U.S. travel agents have seen a decline in forward bookings due to COVID-19, although domestic destinations were perceived to be safer.

Bonham added that he has not heard of panicked cancellations in the islands for now.

Maui Hotel & Lodging Association Executive Director Rod Antone said on Wednesday that some properties have seen some cancellations from Asia, but “so far it’s more about what may be to come.”

He added that the association continues to monitor the situation and stands ready to assist state and county government if the need arises.

The association receives daily updates from the state Department of Health and Hawaii Tourism Authority. It also works closely with DOH’s Maui District Health Office and the Maui Emergency Management Agency, Antone said in a email.

He added that everyone is saying the same thing, “that we have no confirmed COVID-19 cases on Maui or anywhere else in the state at this time.”

When asked about any effects of COVID-19 on Maui County tourism, such as hotel stays, activities or general impacts, Maui Visitors Bureau Director of Public Relations & Marketing Leanne Pletcher suggested that individual properties and activities be contacted instead. She noted that the Hawaii Tourism Authority does not provide forecast numbers.

The UHERO report, meanwhile, said that in the first half of February, international passenger counts to Hawaii from countries other than Japan have fallen 21 percent below year-earlier levels, and UHERO’s forecast assumes no arrivals from China until the third quarter of this year.

The “important unknown” is whether virus concerns will also cause a “sharp falloff in Japanese travelers,” the report said.

Past epidemics, like the 2003 Severe Acute Respiratory Syndrome, or SARS outbreak, raise concerns. In 2003, there was a temporary 25 percent decline in visitors from nonprimary markets and a “dramatic” 40 percent drop in Japanese visitors, while U.S. arrivals were rising steadily.

Given the strength of the domestic market, the anticipated Chinese visitor losses and limited effects in other Asian markets will still not be enough to pull visitor growth much below 2 percent this year, under UHERO’s baseline forecast.

UHERO predicts that in 2021, overall visitor arrivals will pick up a bit, but then remain “muted compared with recent years.”

But the length of the epidemic, its reach and duration are still unknown. The report said it is “encouraging” that the falloff in passenger counts has been relatively limited so far.

After the UHERO report came out this week, The Associated Press quoted Hawaii Lodging & Tourism Association President and CEO Mufi Hannemann, who said, “We still think it’s a bit early to make those kinds of predictions.”

Bonham said Wednesday that “Mufi is right, there is no reason for panic.” But he added that, “we need to be prepared.”

“Businesses need to think about their situation, and (if) they are prepared for the possibility of a downturn,” Bonham said.

* The Associated Press contributed to this report. Melissa Tanji can be reached at mtanji@mauinews.com.