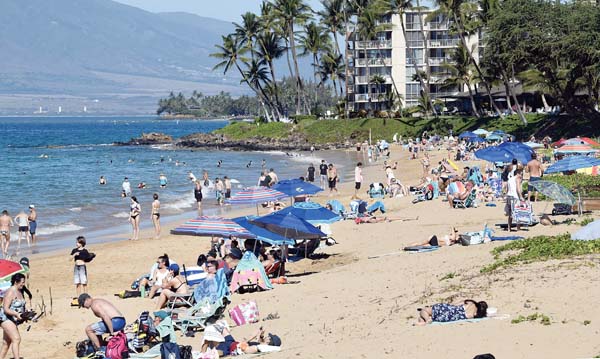 Hawaii Tourism Authority’s visitor statistics released this week said Maui led Neighbor Islands with 3,071,596 visitors in 2019, a 5.4 percent increase from the year prior and the highest amount since the group began tracking in 1990.

The preliminary year-end data showed the Aloha State for the first time pushed past the 10 million mark — with 10,424,995 visitors to Hawaii last year.

Courtney Chargin, a Maui native who works in the local hotel industry, had mixed reactions to the report.

“It’s good for us but it’s not,” she said Saturday. “It’s a hard toss up. It feels like (tourists) run us really thin. All their funds go to other things besides giving us raises and whatnot.”

In the last few years, her commute to work has increased due to more vehicles on the road, and Chargin said her and her boyfriend notice overcrowding on the beach.

Since 1990, visitors annually for Maui have been above the 2 million threshold, only dipping below that mark once. In 2009, 1.8 million visitors came to Maui.

Perez said his nonprofit is against any increase in visitor accommodations, adding that there are 10 new or expanded hotels being proposed for Maui.

“We need to ask ourselves, ‘At what point is it going to be too much — is it 4 million (visitors annually)? What about 30 million? There’s got to be some recognition that we are on an island and it has a carrying capacity. There are only so many miles of beaches. In fact, our beaches are shrinking from sea-level rise.”

“The other part of the story is that the industry, government and members of the community are all working together to help manage tourism and educate our visitors,” he said. “There are a lot of efforts going on, from trying to get rules for visitors in every hotel room, to working with rental car agencies to shuttle visitors to their hotels where some of them can rent vehicles there, to placing educational videos in the airport.”

Perez said the mayor’s committee is mulling on a rental car mirror tag on good etiquette.

While arrivals saw a record for Maui, Valley Isle visitor spending also hit a new high last year of $5.12 billion, a 2.4 percent increase over 2018. However, daily spending dropped 0.6 percent to $211 per person.

Antone said that although revenue went up, costs also went up for the hotel industry, including property taxes and insurance premiums, some of which increased by 30 percent.

“It’s always better to look at the whole picture,” he said.

Also, visitor days increased 3 percent to 66,414 visitors in 2019, according to the HTA report. During Maui’s slowest month of September, an average of 52,389 visitors were on island on any given day. The island’s busiest month of December had 75,884 average daily visitors.