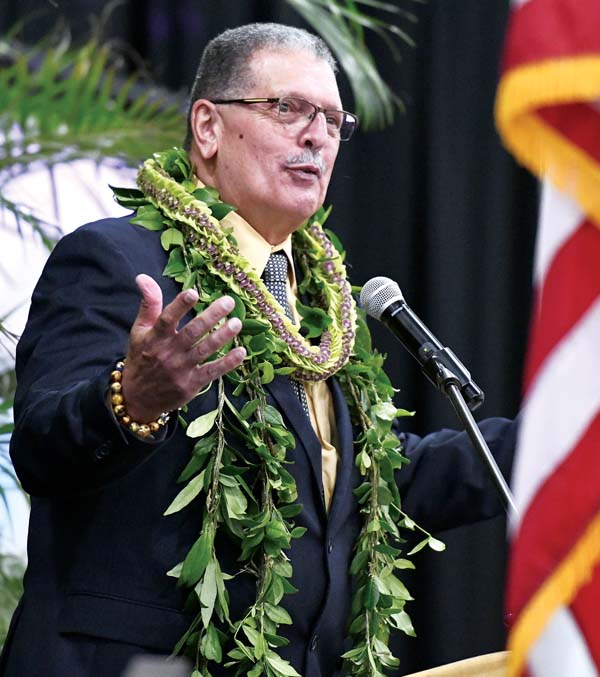 KIHEI — Standing in the brand new South Maui Community Gym, Mayor Michael Victorino highlighted more community facilities and improvements to come — from a commercial kitchen and fieldhouse on Lanai to the first repairs on the War Memorial Stadium parking lot in more than 50 years.

Upwards of 300 people attended Victorino’s State of the County address Tuesday night at the new gym, which opened in December and features nearly 32,000 square feet of space, seating for more than 1,000 people and air conditioning.

“Being here, in this new place with all of you, makes me think about our ohana,” Victorino said. “Whether we gather on playing fields, or in meeting rooms, we come together to make this community a better place.”

Victorino pointed to recently completed projects, like the renovation of all 18 holes at the Waiehu Golf Course, and upcoming plans, like “the highly anticipated commercial kitchen” in the Lanai Community Center that “will upgrade food production possibilities.” 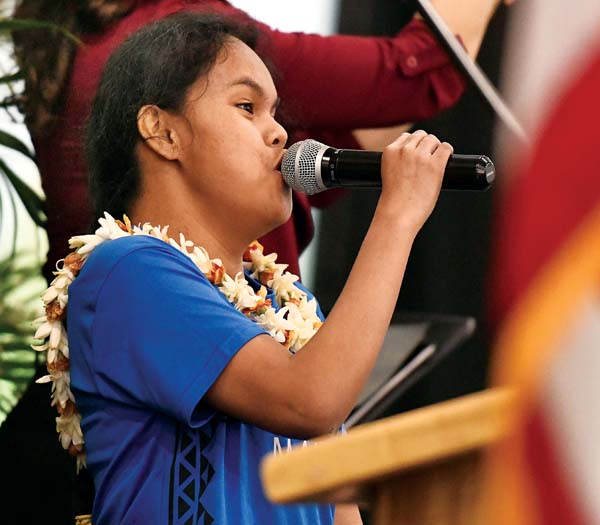 Another long-awaited project is the county Department of Public Works baseyard on Molokai, which will be opening soon.

And, last week, the county broke ground on Phase 1A of the Wailuku Town infrastructure improvements project, which will upgrade roads and sidewalks as well as water, sewer and drainage systems. The work will pave the way for Phase 1B of the project, which will include a four-level parking structure at the current Wailuku Municipal Parking Lot.

Meanwhile, a project to repave the War Memorial Stadium parking lot is set to start next month.

“There have been no major repairs at this parking lot since it opened more than 50 years ago,” Victorino said. “And the improvements will also add over 40 additional parking stalls.”

The mayor also reviewed several housing projects in the works or recently approved:

• Kahului Lani, a 164-unit Catholic Charities project for seniors, is finishing up its first phase of 81 units and will welcome its first residents this year. Another 83 units will be offered in the second phase.

• Hale Mahaolu Ewalu, a 60-unit senior rental housing project in Kulamalu, has filled all 38 units of its first phase and is constructing 22 more units in Phase II.

• Kenolio Apartments, a 184-unit affordable rental housing project by Pacific West Communities in Kihei, has been undergoing construction with a targeted completion date of May 2021.

• Waikapu Country Town, a 1,433-unit, residential mixed-use project, was approved by the County Council in September.

• Keawe Street Apartments, a 200-unit affordable housing project by Ikaika Ohana in Lahaina, was approved Friday by the council and is targeted for completion in 2023.

And, last month the council approved Victorino’s proposal of $5 million for a 25-home Habitat for Humanity affordable housing project in Hana.

Victorino also pointed to county service improvements, including the installation of self-service kiosks for vehicle registration renewals, Sunday hours for residential green-waste disposal at the Central Maui Landfill and an improved Vehicle Disposal Program that will allow households to dispose of two vehicles per year.

He also touched on tourism management, saying that the county had formed a special group to look into the issue and planned to improve visitor education through an “Aloha Pledge,” in which guests of visitor accommodations “promise to preserve and protect the environment and your island home.” He also noted the administration’s recent decision to ban commercial ocean activities at county beach parks on Sundays and holidays.

Council Chairwoman Alice Lee said after the speech that she thought it was “very positive.”

“He hit all the highlights of the past year,” Lee said. “I was hoping he would give us a sneak peek of what the budget is going to bring and what some of the projects, specifically the new projects, that will be included in the upcoming budget. I’d be happy to find out if he’s going to be making any changes to the taxes.”

However, Lee said she expected to learn more once the mayor releases his budget March 25.

Vice Chairwoman Keani Rawlins-Fernandez, who chairs the budget committee, said she was glad for the creation of the tourism task force, “because it’s a big challenge, and it shows his responsiveness to the community.” One of the requirements that the council put on the grant for the Maui Visitors Bureau was to shift from promotion to management.

She added that the council has been working closely with the budget director and department directors in preparation for the budget.

“I think in this second year, I predict you’re going to see more collaboration, more cooperation between the council and the administration,” Lee said. “Because we’re very, very serious about reaching our goals, and the only way we can do that is to work together.”