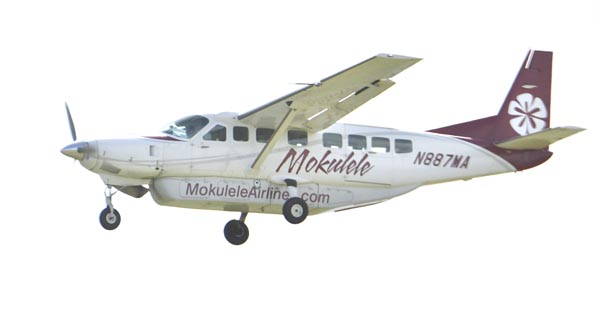 Mokulele Airlines will continue to service Hana with the help of federal funding after its competitor, Makani Kai Air, withdrew its proposal, citing the local hotel’s decision to start offering flights to customers.

The U.S. Department of Transportation said in an order issued Monday that Mokulele had been selected to provide Essential Air Service on a four-year contract worth $668,006. The department also vacated its November decision selecting Makani Kai as the carrier to Hana.

“We are pleased to have been awarded a new four-year contract,” said Keith Sisson, spokesman for Southern Airways, which purchased Mokulele last year. “Mokulele Airlines is proud to serve more airports in Hawaii than any other airline.”

Back in November, the department had announced that it was planning to rely on Makani Kai to operate flights between Hana and Kahului through the Essential Air Service program, which subsidizes airlines to help service rural or hard-to-reach communities.

Mokulele, which held the Essential Air Service contract from Nov. 21, 2017, to Nov. 30, 2019, at an annual subsidy of $114,099, bid for the new contract as did Makani Kai. Mokulele proposed a $668,006 subsidy over a four-year term. However, because Makani Kai offered to fly the route without a subsidy, the department allowed Makani Kai to provide service to Hana.

“In December, we found out that Travaasa bought a Cessna Caravan to handle their guests, which really kind of pulls the wind out of our sails because we were counting on that to be part of the revenue,” P.J. O’Reilley, Makani Kai director of sales, said Thursday. “So Richard backed out and withdrew his offer to do it for free.”

On Dec. 16, Makani Kai President Richard Schuman sent a letter to the department notifying them of the withdrawal and explaining the situation with the hotel.

O’Reilley said it’s tough to make a profit on the Hana route “because you average like two or three people on that trip.” He wasn’t sure how many of Makani Kai’s future customers would’ve been visitors or residents but said that every passenger makes a difference.

“So you cut out a little bit, even a person or two per trip, it makes a big difference when you have nine seats to fill,” O’Reilley said.

Teri Akahoshi, a spokeswoman for Mani Brothers Real Estate Group that bought Travaasa last year, confirmed Wednesday that the company “did purchase an airplane that will be utilized down the line — there is no schedule yet — as an added amenity to guests staying at Travaasa Hana, providing an alternative mode of transportation to the property.”

“The team feels that government subsidized commercial air service is essential to both residents and visitors of Hana, and hopes that Makani Kai, Mokulele and any other airline will continue to offer commercial flights to the destination,” Akahoshi said.

When asked if Mokulele would have sufficient ridership to operate in Hana with Travaasa entering the market, Sisson said that “our commitment to Hana is long term.”

“We continue to maintain that this route will be sustainable well into the future as long as it receives subsidy support,” said Sisson, who did not respond to questions about what percentage of Mokulele’s ridership was residents and visitors.

According to its proposal, Mokulele’s total operating revenues from the Hana-Kahului route are $318,091. With operating expenses at $452,761, the first-year subsidy of $157,309 would help offset Mokulele’s losses and provide a profit of about $22,638, or 5 percent, the airline said. The subsidy comes out to about $28 per passenger and $109 per departure.