But organizations have plans to mobilize quickly if elusive net spotted 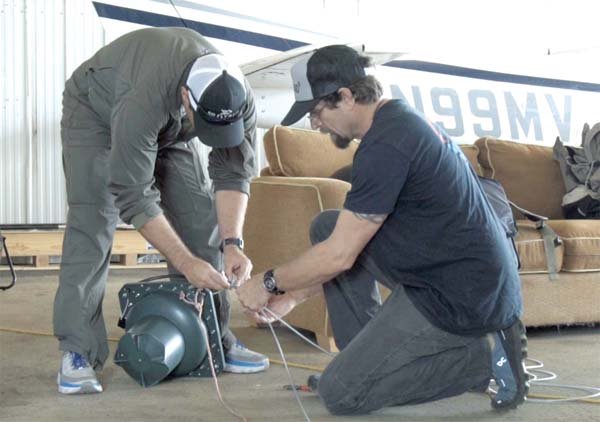 Nick Moran of Go Fly Maui (standing) and Campbell Farrell, executive director of Love the Sea, prepare tracking equipment to drop on a large ghost net during a helicopter search flight Jan. 15. The large net was not found, but smaller ones were recovered the next day.

There was no sign of the monster 50-foot-long, 70-foot-wide ghost net as volunteers last month scanned the seas around Maui by helicopter.

But volunteers did spot two smaller ghost nets that weighed around 250 pounds total and were removed from the ocean, said Campbell Farrell, executive director of Love the Sea, a nonprofit organization.

Volunteers went up in a R44 helicopter from Go Fly Maui on Jan. 15 to search for the large ghost net spotted in December between Maui and Kahoolawe. They combed more than 100 square miles but found nothing, Farrell said.

Ghost nets usually are made up of discarded nets and fishing gear, although they could harbor invasive species and be navigational hazards to boaters.

“These nets can move 4 to 8 miles per day, so time is of the essence when chasing an unmarked hazard like we were,” Farrell said in an email recently. “Because it took a few days to mobilize this first-of-its-kind search (around Maui) we ended up marking and retrieving a different net.”

The net volunteers were searching for was reported via social media on Dec. 29 and was suspected to be dangling 50 feet deep. Officials had thought it was off the coast of central Kihei on Jan. 13, which spawned the helicopter search Jan. 15.

“Flying at 1,000 feet, we could pretty much see everything, whales, sharks, kayakers and boaters, even small debris like plastic crates and buckets,” Farrell wrote. “We dropped a GPS tracker onto the largest ghost net we saw and returned by boat the next day. In 16 hours, the net had drifted 5 miles.”

At this point, Farrell said no more searches are scheduled for the monster net, but they now have a plan in place to deal with ghost net reports.

Matt Lane, founder of Maui-based Love the Sea, said Tuesday that a protocol is now in place if a large net is spotted. Helicopter companies are being asked to report large nets, and the state Department of Land and Natural Resources, U.S. Coast Guard and harbor masters will be informed if one is reported.

If the net is very large, organizations could reach out to the Ocean Voyages Institute, based in Sausalito, Calif., to see if a boat could be scheduled to pick up the net, Lane said.

In January, the Institute, which has a project focusing on major ocean cleanups and raising awareness of marine debris and ocean trash, had a vessel that was around Hawaii and could have picked up the large ghost net.

For more information on Love the Sea and to make a donation to the efforts see, go to www.lovethesea.org.