Teams pair up for top-tier finish at state competition 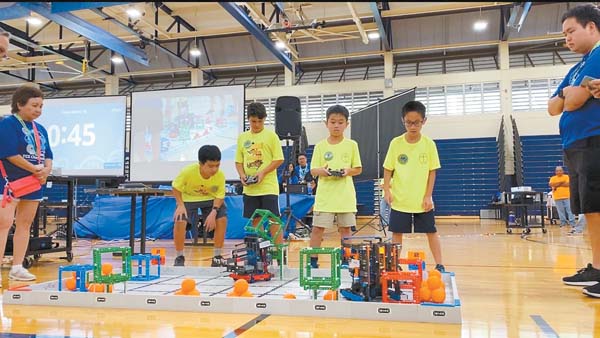 Maui County’s best young robotics minds joined forces over the weekend to bring home the hardware and earn their schools a spot at the world championships.

Pukalani Elementary School and a Mililani team earned first place in the state competition on Oahu, while another Pukalani squad and a Kaunakakai Elementary team paired up to earn second place. Both Pukalani and Kaunakakai are bound for the 2020 VEX Robotics World Championship in Louisville, Ky., from April 26-28.

“Maui County swept up this year,” Kaunakakai coach Joe Howe said. “We have kids in our charge that are going to change the world.”

Teams competed in a game called Squared Away, which required the robots to move and stack cubes of different colors, explained Jasmine Domingo, coach of the Pukalani STEM Imagineers. Green cubes were worth 20 points and had to be stacked on platforms of various heights, while red and blue cubes had to be carried from one end of the field to the other. There were also balls on the field that could be pushed into or stacked on top of cubes for points. 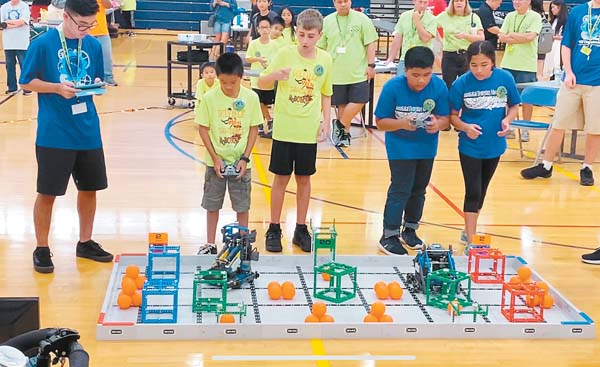 Howe said the competition was “pretty emotional for some of them,” as they had to come back from a couple of bad rounds.

“We got some spirits that were down, but we had to perk them back up and get them refocused on the talk at hand, and they did really good,” Howe said. “Robotics is tough for elementary school-aged kids, because they are getting their first exposure to pressure. . . . I think it’s building a lot of character.”

Domingo said it helped that her students had faced the same challenge throughout the season. With each tournament, they found ways to tinker with and improve their robot.

“That’s something we train them to do, is to always improve,” she said. “So after every competition, we get them together, (talk about) what works, what didn’t work, and then also, what did they see other teams doing. It just kind of opens their minds to what is possible.”

The Upcountry school also put together two STEM projects — one involved building a prototype robot that would sanitize the school’s bathroom, while the other imagined the concept of a robotic or smart car that could sense a driver’s alcohol levels and prevent the car from starting. 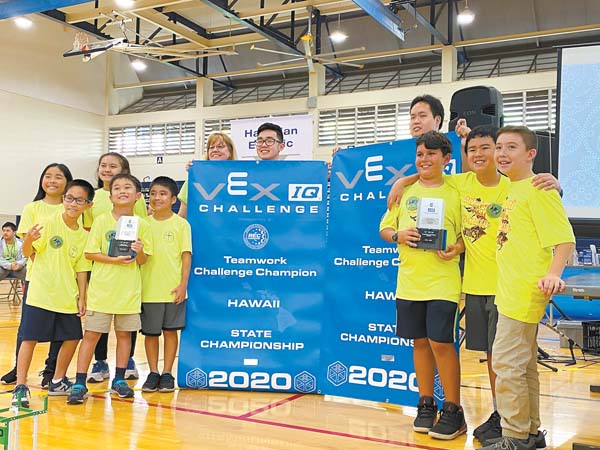 The Pukalani STEM Imagineers (right) pose with their first-place awards and with their alliance partners, the Mililani Masters.

Both Pukalani and Kaunakakai had successful seasons in the lead-up to states. Pukalani competed in a Valley Isle League of about 25 teams from August to December and finished first, winning a $1,000 prize that helped them travel to states along with a $3,000 grant from the Maui Economic Development Board. The team also entered the 2019 Pan Pacific VEX IQ Championship and finished second in a tough field that included both elementary and middle schools.

“I think it just gave them a lot of confidence in themselves,” Domingo said.

Kaunakakai also had a “whirlwind season,” finishing first in alliance in the Molokai league and earning the Excellence Award, the top honor in robotics, Howe said. They also traveled to Maui twice for competitions. Akamai Bots, the two-person team of 6th-graders Mark Ragonton and Kapri Friel who won second at states, also placed second in a Maui competition. 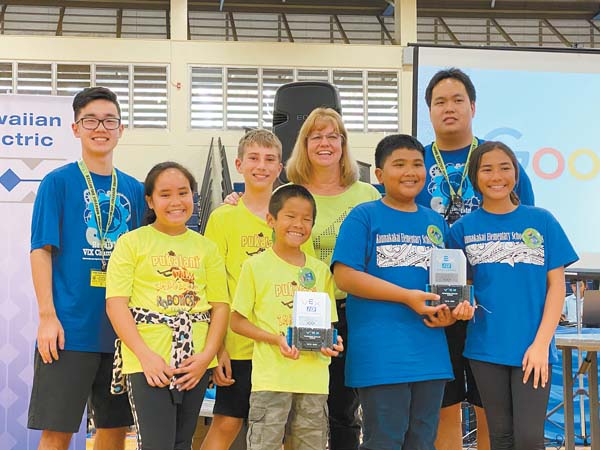 The Pukalani and Kaunakakai teams, who combined to finish second at states, pose with their awards. Both schools have qualified for worlds.

For Howe and fellow coach Andrea Yuen, the success at states was especially meaningful for Ragonton, who got sick halfway through last season of suspected meningitis, though the exact illness was never confirmed, and fell into a coma. His team went on to nationals, but he wasn’t able to take part. Now this year, healthy and healed, he and Friel teamed up with Pukalani to earn second at states and a place at worlds.

“The story of Mark, everybody on the team knows it,” Howe said. “We keep telling the kids, don’t give up. Don’t ever give up and keep focused no matter what happens. We use Mark’s story to kind of inspire them.”

Kaunakakai, which qualified four of its eight teams for states, will be taking all nine students from its combined four teams to the world championship, along with both coaches. Howe estimated that they will need to raise around $13,000 and that they will be “looking for donations big time.” For more information, email josephdhowe@yahoo.com.

Pukalani will be taking 14 kids from its two teams and three coaches — Domingo, Debbie Hisashima and Misty Vierra. Domingo said their goal is $25,000. For more information or to donate, visit ie.gofundme.com/f/1v5kw7bj40.