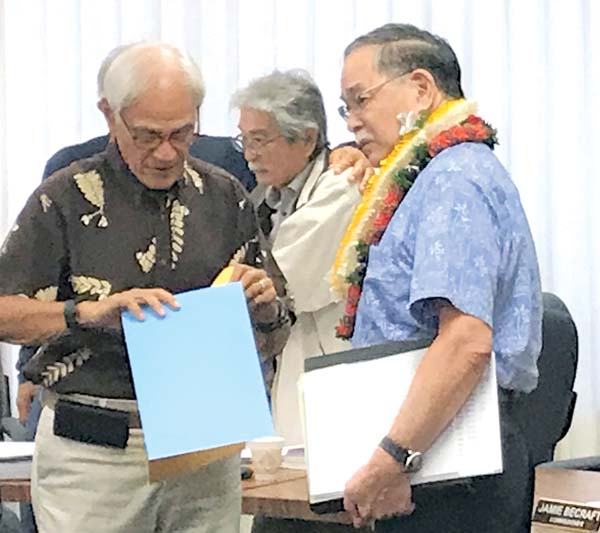 Mukai, who has undergone public scrutiny for pushing significant rule changes without proper public review and notice during his time as director, was given a congratulatory resolution for his three and half years at the helm of the department during his final Liquor Control Commission meeting on Wednesday in Wailuku.

Mukai did not address the scrutiny and past issues in his parting comments to the commission, which recognized his retirement at the end of the month.

Aluli said that the commission will go over the process of selecting a new director at its March meeting. The commission sets policy for the department and has the power to appoint and dismiss the liquor director.

Formerly the liquor deputy director, Mukai took over in June 2016, following an eight-month hiring process. He has faced heavy scrutiny from licensees and residents since becoming director, with much of the criticism stemming from major rule changes done with little public review or notice. These changes included allowing 24-hour retail sales of liquor and imposing stringent requirements on nonprofit groups seeking single-event licenses to serve alcohol.

Many of the rule changes later were rolled back by the commission over public concern and complaints.

During his outgoing speech to the commission Wednesday, Mukai applauded those who helped make it easier for nonprofits to hold fundraising events that serve alcohol, as well as those who helped eliminate other time-consuming and stringent requirements for liquor permits.

Mukai said both led the charge to eliminate burdens on nonprofits and licensees by going to the state Legislature and working with the community and the department to make changes.

“They really did an outstanding job,” Mukai said.

But Mukai did not acknowledge that some of the issues Paulson and Cabebe sought to remedy came from his department’s interpretation of the rules during his tenure.

This included requiring criminal background checks, all necessary clearances from government agencies and listing of all officers and directors for special licenses for one-day events for nonprofits. Mukai at a meeting in 2017 said that those requirements were required by state law.

But calls to other county liquor departments revealed that Maui County was the only one to interpret the law that way. The state Department of the Attorney General and its officials said that the counties have the discretion to conduct the background checks, but that they are not required by state law.

On Wednesday, Mukai also commended the department-organized Small Business Advisory Committee, which reviewed proposed liquor rules from the mayor, County Council and other government agencies to see how the proposed rules would impact businesses.

He also thanked the liquor commission, which held “eight to nine” public hearings and passed 100-plus rule amendments during his tenure.

He also congratulated the commission for awarding funding for liquor education to the Maui Coalition for Drug-Free Youth, which he said is unprecedented.

In 2018, the Liquor Control Commission gave Mukai “above average, satisfactory marks” in its first review of his job performance, according to a letter sent from the commission to then-Mayor Alan Arakawa.

Summer Macedo competes at the Beachwaver Maui Pro at Honolua Bay in November 2018. Macedo has competed in the last two editions of the Maui Pro, finishing equal-ninth both times. WSL / Ed Sloane photo

There still was a line of snow along a sidewalk at the summit of Haleakala on Wednesday. The Summit District of the national park reopened Wednesday after being closed for two days due to hazardous conditions caused by wintry weather. National Park Service / JAMIE MANSFIELD photo

Eucalyptus and pine trees will be removed from the upper parking lot of the Kahakapao Recreation Area beginning next week. Hawaii Department of Land and Natural Resources photo