State official: No profiteering from water use 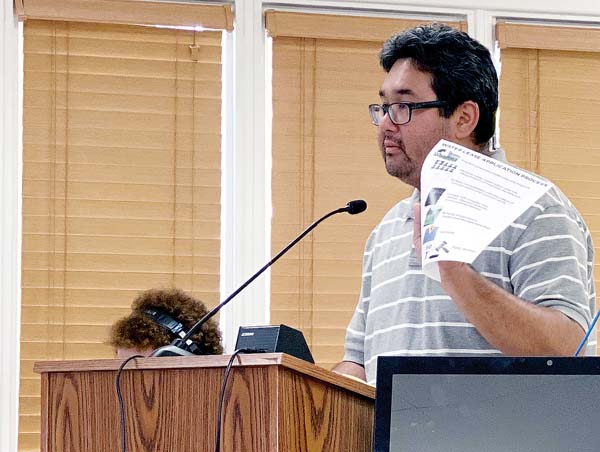 WAILUKU — Amid community concerns that public trust water will be used for private profit, a state Department of Land and Natural Resources official said Thursday that a long-term water lease process aims to ensure that does not happen.

Ian Hirokawa, special projects coordinator for the Land Division overseeing the water lease process at DLNR, discussed the state’s auctioning and sale of water at the county’s Board of Water Supply meeting.

“I don’t know if you would just have free rein,” Hirokawa said in response to a question on whether the auction winner would be able to sell water at its whim. “When we say sell, I think that’s kind of what I want to clarify. Again, we go back to that issue of we’re concerned about maybe monetizing the public trust resource.”

Hirokawa said he can understand a lessee leasing their lands and selling water to recoup costs of delivery, which is what many do. However, “profiteering is a whole ‘nother problem. Selling would have certain limitations.”

Hirokawa added that any lessee taking water from state lands would have to show reasonable and beneficial use of the public trust resource.

His presentation follows residents’ questions about a 30-year water lease application by Alexander & Baldwin and its East Maui Irrigation, which delivers East Maui water to Upcountry and Central Maui through a system of ditches, tunnels and siphons. Diversified agriculture company Mahi Pono, which is using most of the water, is half owner of EMI.

Some have wondered whether Mahi Pono, a joint venture between a Canadian pension fund and a California farming group, is seeking to profit from the water. Mahi Pono’s Chief Operating Officer Tim O’Laughlin said last month that the company is not looking to profit off water and is seeking state water rights solely for farming operations.

Hirokawa also outlined the complicated state water lease application process, which he said is subject to change. DLNR said Thursday that the state has yet to convert any of its controversial rollover one-year water permits into long-term leases. The short-term revocable permits have come under fire legally and in the public forum, in part for bypassing environmental studies.

According to a handout from Hirokawa, the water lease process involves:

• Confirming proposed water use and amount.

• Developing a water reservation with the Department of Hawaiian Home Lands, which can reserve rights for water and is a beneficiary of the lease money.

• Written consultation with the DLNR Office of Conservation and Coastal Lands.

• Complying with the environmental review process in Chapter 343 of Hawaii Revised Statues, which requires an environmental impact statement.

Hirokawa said that determining the fair market value has “proven to be one of the bigger challenges because water traditionally is free, it’s not an economic commodity.”

“The hard part for us is putting a value on the water,” he said after the meeting. “Applicants have to meet the requirements, but the valuation is going to be the biggest problem to solve. You need to get a fair price for everybody in the state because it’s a resource . . . The main thing, too, is we don’t want it to be a commodity.”

The state then issues a notice of public auction and requests that bidders submit an application. The auction is not open, and applicants must be pre-qualified by the state.

The Department of Hawaiian Home Lands at 30 percent and Office of Hawaiian Affairs at 20 percent share in revenues from water leases, Hirokawa said.

EMI was part of the acquisition when Mahi Pono purchased 41,000 acres of old sugar fields from A&B more than a year ago. The 75-mile water delivery system transports East Maui water, including from state land, to Upcountry and Central Maui for public water users, farming and other businesses.

Historically, the water delivery system has been the focal point of conflict over water rights. A&B has diverted water for more than 150 years, mostly for sugar operations, which ceased in 2016. Diversions crippled taro farming, hurt native ecosystems and deterred Native Hawaiian cultural practices in East Maui.

Decadeslong legal challenges by Native Hawaiian farmers and cultural practitioners pressured the state to mandate the return of water to East Maui streams through interim in-stream flow standards established in 2018.

EMI currently is operating under a one-year ­permit that runs through 2020.

The Board of Water Supply approved a temporary investigative group study that recommended the county acquire control of its own water supply or risk water interruption if existing owners sell, go broke or experience other negative impacts.

The Maui News Faith-based organizations impacted by the coronavirus are eligible to participate in a federal ...