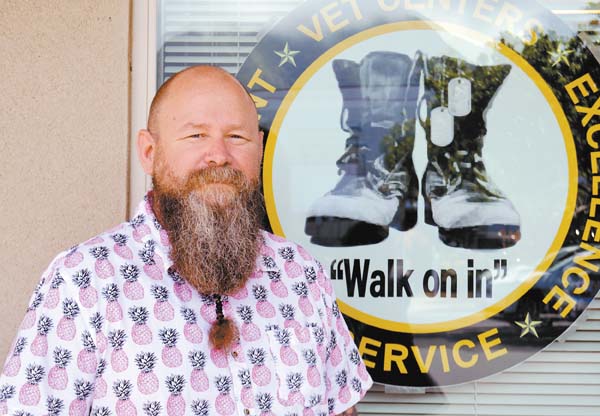 Roger Johnston Jr. is the new director of the Maui Vet Center. Group therapy services or casual talk-story sessions are available at the small, quiet facility in Maui Lani for combat veterans and their families. The Maui News / DAKOTA GROSSMAN photo

KAHULUI — Through care, compassion and companionship, the Maui Vet Center helps local combat veterans and their families readjust or recover from traumas, while also chiseling away at the stigma of being a “broken veteran.”

“They need that connection, they need to be around other people,” said Roger Johnston Jr. on Wednesday afternoon in his office. “They are used to tribe and connection, and then they get out of the military and many don’t have it anymore, and so it’s one of the primary things that the Vet Center is trying to do, is to at least partially offer that.”

The trauma needs to be dealt with.

“No matter what experience or trauma has happened in your life, you have to work through it,” he said. “Time doesn’t heal that wound. The only thing that heals it is by working through it.”

The term “broken veteran” is complicated and multifaceted, but summarizes how some veterans may feel — emotionally unstable and ignored. They cannot “unsee what they have seen” and therefore, are unable to integrate back into regular life, Johnston said.

The veteran may not “know what war totally means” and how to work through their feelings, Johnston said. That’s what therapists are for.

“You are not broken,” he said.

The Maui Vet Center was established in the mid-1980s with the primary goals to assist combat veterans, military sexual trauma victims and veterans’ families to deal with issues such as bereavement, adjusting to civilian life after a military or traumatic experience, post-traumatic stress disorders or marriage problems.

The center is by design located in a quiet and quaint area just past Maui Lani Regional Park on 157 Maa St.

“We want veterans to feel comfortable, but we also don’t want the stigma that some veterans feel, when they go to, like the CBOC or Community-Based Outpatient Clinics,” he said. “There’s a stigma for some of them to go, especially for mental health stuff, but the approach that the Vet Centers take is that we are a little difficult to find because we want veterans to feel safe when they come here.”

Vet Centers, which are separate entities from but funded by the Department of Veteran Affairs, were established in 1979 out of the recognition that a significant number of Vietnam-era veterans were experiencing readjustment problems, according to the VA website.

More than half of the clientele at the Maui center are Vietnam War veterans, Johnston said, with the remainder being a mix of World War II, Korean or Global War on Terror (GWAT) veterans.

There are three staff members at the Maui Vet Center: Johnston, Office Manager Denice Brennan and readjustment counselor Kathleen Welch. The center offers one-on-one sessions and group therapy, as well as activities outside of the center.

For example, a group meets for yoga every Monday at the Veterans of Foreign Wars Post 3850 in Kihei. Starting Wednesday evenings, Johnston opened up a group anger management and emotional regulation class to give day-working veterans an opportunity to stop by.

“We want them to know that they can come here, be themselves, talk about the issues that they struggle with coming from war, and you know, some of these other issues that they deal with,” he said. “They feel displaced, they don’t feel like they can 100 percent reconnect and that’s why we’re called readjustment counselors, not just straight counselors.”

To incorporate and experience the local culture, Johnston would like to implement a monthly beach potluck and maybe partner with a paddling club to take clients out on the water, just to “enjoy each other’s company.”

“We believe that connections are a super important thing. For people to heal from those things, more and more research is starting to point to group therapy,” he added. “That’s why we have these talk-story things. It’s just as much socialization as it is getting them out in the world and engage.”

Prior to becoming the Maui director in mid-December, Johnston spent five years as a counselor at the Las Vegas Vet Center. After the previous Maui Vet Center director retired in March, Johnston served as the site’s interim director on a few occasions before filling in permanently.

Johnston served in the Army for more than 20 years, spending most of his career in either infantry, combat or being a forward observer. He served in the 82nd Airborne, 19th Special Forces group and I Core Artillery.

In 2008, Johnston was wounded and medevaced from Iraq. He was told that his “military career was done” and that he was “never going to be able to deploy again.”

The mission is different than mental health services at the VA Community-Based Outpatient Clinic, he said, but there is some overlap to the scope of care, such as assisting with post-war traumas. Issues like schizophrenia and bipolar disorders are typically outside the Vet Center’s scope of care, although, they will take those cases, too.

Services are free to any eligible veteran regardless of discharge status, which is not necessarily the case with the Veterans Health Administration and Outpatient Clinics. Primary care providers can refer a veteran to a Vet Center, but a referral is not required.

All records are confidential and are kept in a separate system that other VA entities and Vet Centers can not access. Scheduling also is done independently of the VA, allowing “us to see people much more frequently,” he said.

“Every veteran that I’ve talked to or who have come through the door, they all say the same thing, they feel like there’s no consistency with the VA, and one thing that Vet Centers try to do, is shore up that whole perception,” Johnston said.

High therapist turnover is one of those factors creating that feeling of inconsistency.

Johnston is working to reconnect with past clients and build a strong foundation “to let people know that we are here, and that the two therapists that are here are consistent and aren’t going anywhere for awhile.”

From his personal background, Johnston concluded that it’s possible to take a negative experience, learn how to “deal with the ignorance around the experience, and flip it to use it to make your life extraordinary.”

• What. Established in the mid-1980s with the primary goals to assist combat veterans, military sexual trauma victims and veterans’ families to deal with issues such as bereavement, adjusting to civilian life after a military or traumatic experience, post-traumatic stress disorders and marriage problems.

It is funded by the VA but is a separate entity.