Drive-thru testing center up and running at War Memorial 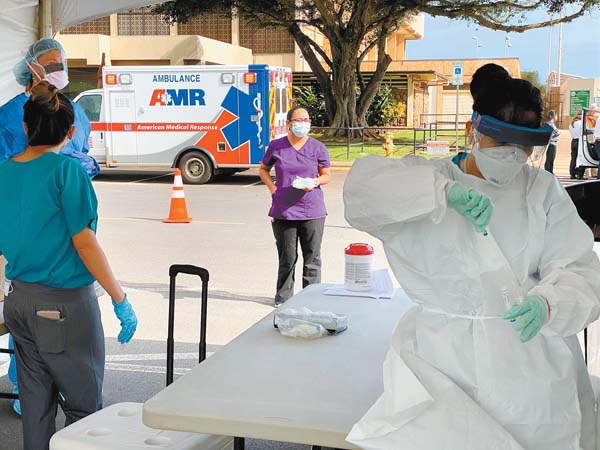 A nurse processes a sample taken from a patient at the drive-thru testing center for COVID-19 at the War Memorial Gym parking lot on Monday morning. A total of 75 people were tested Monday at the site, which is a joint effort between the Maui District Health Office; Kaiser clinics; Maui County; and Maui Memorial Medical Center, Maui Health System. County of Maui / CHRIS SUGIDONO photos

The 75 were chosen from among 150 people who called over an eight-hour period last week, based on a nine-question criteria related to exposure, symptoms, the person’s health and the risk they pose to the community.

“It’s only for the mildly ill,” said Dr. Lorrin Pang, Maui District health officer. “(The hospital) asked us to set this up to get the demand off of them, and other clinics are asking the same.”

Health officials said the wait was about 10 to 15 minutes per appointment. The testing center at the War Memorial Gym parking lot included two large tents with teams of two to three nurses representing Kaiser, Maui Health and the Maui District Health Office.

Patients pulled up and stayed in their vehicles while a nurse checked their picture IDs and collected basic information. Another nurse then took a nasal or throat swab before the patients were sent on their way. The samples are sent to the Mainland and take three to seven days to turn around, Pang said. 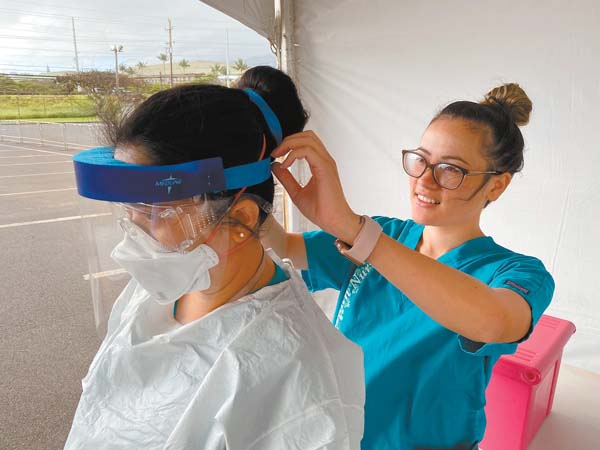 Nurses help one another put on personal protective equipment before taking samples Monday.

Health officials emphasized that testing was by appointment only, and that the site wasn’t accepting random drive-ins. Pang said he didn’t want to see Maui end up like other states that have had to shut down testing sites shortly after opening.

“If you don’t have an appointment, you might wait in a long line just to be turned away,” Pang said.

The drive-thru testing site is geared toward people with milder respiratory flu-like symptoms that could include cough, fever and body aches. Health officials are also looking for those who may have an underlying condition that could put them at greater risk if they contracted COVID-19 or those who come in contact with many people on a regular basis, such as health care workers or TSA agents.

The testing center is not designed for more severe symptoms, that could include “shortness of breath while at rest, like you’re gasping,” Pang said, as well as a very high fever. Residents also need to be alert if they are older or have underlying conditions. If a person’s symptoms are more severe, they should call their doctor, Pang said.

In addition to diverting milder cases from the hospital’s emergency room and the local clinics, the drive-thru testing center allows health care workers to use less personal protective equipment, requiring only that they change gloves between patients, Pang said.

It will also help health officials collect more data on COVID-19 and better understand the virus.

However, because testing kits are limited nationwide, it’s unclear how long the testing center will be open. County spokesman Chris Sugidono said last week that “our intention is to do testing until it is no longer needed,” but that it would ultimately depend on resources.

When asked how the testing center would help the hospital if it could only stay open for so long, Pang said that he hoped that “someone will see the value in what we do” and provide more kits. He explained that there is value in testing the mild cases because it follows the example of places like South Korea where widespread testing has helped find hidden clusters of cases. While Hawaii isn’t experiencing the high rate that South Korea did, “I think it is imperative that we find the clusters and shut them down quickly,” he said.

State epidemiologist Dr. Sarah Park did not provide the number of test kits available statewide during a media telebriefing on Monday, saying that “every lab is a different sort of supply net, and they use a slightly different system.”

“There isn’t one number, so to speak,” she said. “So that’s why even giving you a number isn’t really going to be very meaningful.”

At Maui’s testing site, a local contractor had been building special testing booths for the health care workers; however, these were shelved because they didn’t fit the drive-thru system. Dustin Heiner, owner of Bellissimo Stoneworks and Design Inc., said his company was almost finished with the booths when “the state came in and demanded we remove them from the premises.” He said the booths were in storage and that he hoped the hospital would call and ask him to put them up.

Pang said the system of testing without the booths was always the plan, as the nurses need to move around and talk to people on the passenger’s and driver’s side of the car.

According to Sugidono, the situation was “just a miscommunication.”

“Everyone was working in good faith,” he said. “The District Health Office modeled this drive-thru similar to drive-thru testing sites across the state. We really do appreciate the help people have offered and given.”

King Kekaulike High School’s Teani Arakawa follows through on a header in front of Maui High’s Lauren Mitra during an MIL match in January. The Maui News / MATTHEW THAYER photo

A nurse processes a sample taken from a patient at the drive-thru testing center for COVID-19 at the War Memorial Gym parking lot on Monday morning. A total of 75 people were tested Monday at the site, which is a joint effort between the Maui District Health Office; Kaiser clinics; Maui County; and Maui Memorial Medical Center, Maui Health System. County of Maui / CHRIS SUGIDONO photos

Nurses help one another put on personal protective equipment before taking samples Monday.

Police recruits Jasper Quiocho (left) and Dylan McLellan-Puaa help a man who walks up to try to register a firearm Monday morning at the Wailuku Police Station. The man was told to call to make an appointment, as the Police Department implemented new procedures for firearms registration, limiting the number of people waiting in line to eight, in keeping with social distancing. In the background are Lt. Audra Sellers (left) and Records Section Manager Kat Paschoal. The Maui News / LILA FUJIMOTO photos

A sign at the front entrance to the Wailuku Police Station directs people to make an appointment to register a firearm.