Total of 162 samples taken during first round this week 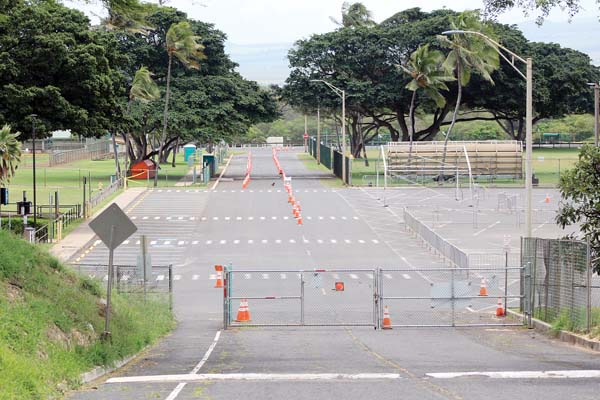 The drive-thru testing center outside War Memorial Gym sits empty Thursday after taking a total of 162 samples over the course of two days this week. The testing center will reopen again Monday and is for people with respiratory symptoms and a history of contact with other ill people. To be screened for an appointment, call 270-7228 between 8 a.m. to 4 p.m. today. If the line is busy, do not leave a voicemail, but try alternate phone numbers: (808) 500-8118, (808) 500-8117 or (808) 500-8120. The Maui News / COLLEEN UECHI photo

Health officials will be taking appointments today for another round of drive-thru testing that starts Monday in the War Memorial Gym parking lot, according to the county.

The drive-thru testing center opened earlier this week and collected 162 samples over the course of two days. By Thursday, it was closed, though the county said it would reopen Monday with 100 testing kits available.

Callers will be screened to see if they are eligible for testing and then given further instructions. Health officials are looking for people with respiratory symptoms and a history of contact with other ill people.

Earlier this week, two large tents with teams of nurses were stationed in the parking lot. Patients drove up, presented identification and information to a nurse and then allowed a swab to be taken. The whole process took about 10 to 15 minutes.

The goal of the testing center is to take the burden off hospitals and clinics and prevent overloading at Maui Memorial Medical Center, which is for patients with severe symptoms. Testing may also help to identify and ultimately decrease clusters of disease within the community, the county said.

Test results are expected early next week, and the Maui District Health Office noted that there may be a spike in the number of new reported COVID-19 cases.

On Thursday, 11 new cases were reported in Hawaii, including eight on Oahu, one on Maui and two Hawaii residents who were diagnosed out of state. State Department of Health Director Dr. Bruce Anderson said that three cases had no history of travel exposure, indicating that there could be some “localized community transmission occurring.” Anderson said the department was still investigating and did not know where the community transmission may be happening.

“I don’t think it should be alarming or surprising to individuals that we are seeing some localized transmission between people that we haven’t been able to clearly identify,” Anderson said during a news conference Thursday. “Obviously as you go through your day, you run into people that may have been traveling, may not have been traveling, and you may not even know it. I wouldn’t put as much stock in that as I would in keeping your social distancing.”

Lt. Gov. Josh Green said during the news conference that private testing will continue to go on, though “it’s meant to go on very carefully so we always have enough reserve of tests for critical ill patients and also for all of our providers that are on the front lines.”

Due to the limited number of test kits, future drive-thru testing periods at War Memorial will be announced when they are available, the county said.