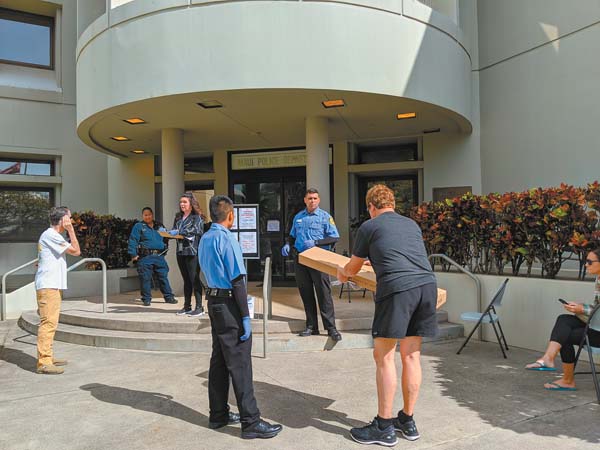 Police recruits Jasper Quiocho (left) and Dylan McLellan-Puaa help a man who walks up to try to register a firearm Monday morning at the Wailuku Police Station. The man was told to call to make an appointment, as the Police Department implemented new procedures for firearms registration, limiting the number of people waiting in line to eight, in keeping with social distancing. In the background are Lt. Audra Sellers (left) and Records Section Manager Kat Paschoal. The Maui News / LILA FUJIMOTO photos

WAILUKU — People are being required to call for appointments to register firearms and to make some police reports, as police try to limit face-to-face contact amid concerns about COVID-19.

After people lined up outside the Wailuku Police Station on Friday to register firearms during a shortened 10 a.m. to 2 p.m. window, a new procedure was put in place Monday to allow a maximum of 25 firearm registrations a day, said Kat Paschoal, manager of the police Records Section.

She said people were given approximate appointment times so no more than eight people at a time would be waiting in line.

“That’s in line with the mayor’s directive to make sure we don’t have a gathering of more than 10 people,” said Paschoal, who worked into Sunday evening to devise the new procedures.

Designated spots, allowing for social distancing, were marked outside the police station for people to wait before being called inside. 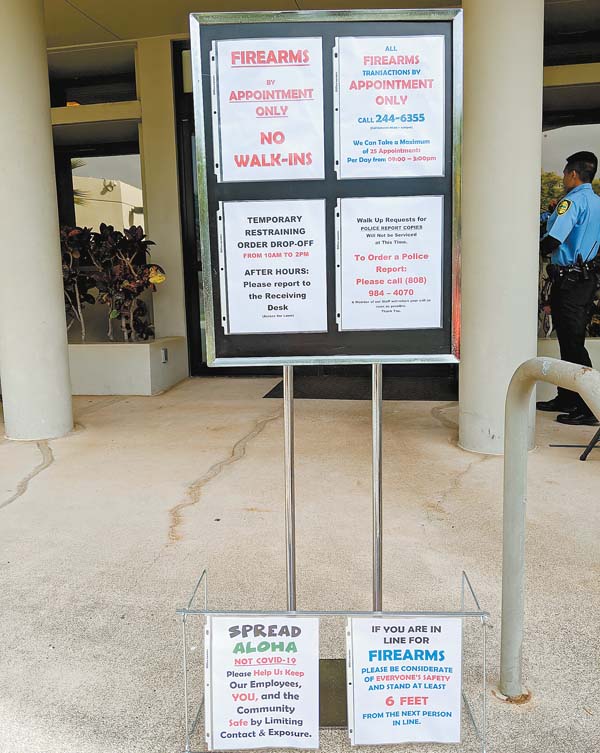 A sign at the front entrance to the Wailuku Police Station directs people to make an appointment to register a firearm.

On Monday, police recruits Dylan McLellan-Puaa and Jasper Quiocho were with Paschoal outside the station helping direct people arriving for firearm registration and other Records Section services.

Signs instructed people to call 244-6355 for a firearm registration appointment.

Those wanting to obtain a copy of a police report or register as a sex offender were told to call 984-4070.

The police station front entrance leading to the Receiving Desk was locked, with a button to call to be let in.

People wanting to file a nonemergency police report were directed to call 244-6400 for an officer to document their case by phone or meet them at their residence.

“It’s not that we’re not going to help you,” she said. “We prefer to do it over the phone. That’s to make sure we can still respond. If our officers get exposed, we may have to pull them off the line, which would dwindle our staffing. We want to make sure we’re always available to render services.”

Police Chief Tivoli Faaumu said Saturday that one officer was in a 14-day self-quarantine after being exposed on the job to someone under observation for COVID-19.

The change in firearms registration procedures is occurring as gun shops are reporting an increase in sales.

On average, 300 to 400 firearms a month are registered with police, Paschoal said. “We’re doubling it right now,” she said. “It’s a combination of people being afraid that legislation is going to change and seeking self-protection if they think there will be chaos. A lot of the new applicants might be doing that out of fear.”

“It’s a long process,” Sellers said. “On a normal day, it takes a while. We’re trying to accommodate everyone.”

“Our gun community is a great bunch of people,” Paschoal said. “They have been patient with us, for the most part, and very cooperative.”

Because the time for each registration can vary, people aren’t given specific times for appointments.

Sellers said McLellan-Puaa and Quiocho are among 90th Recruit Class members whose training was put on hold while they are being assigned to other duties. Some have been assigned to the Receiving Desk, allowing other officers to go back on the road, Sellers said.

She said the number of calls for police service hasn’t decreased since the coronavirus pandemic. Police response may take longer because dispatchers are asking additional questions, such as travel history of some patients, and some responding officers are taking time to don personal protective equipment, Sellers said.

She said some people haven’t realized that they can make reports over the phone.

“We’d like to hope that people are being understanding. I know tensions are high, people are stressed. Just take a moment and try and calm yourselves. We’re out there doing what we have to do.

“We still have arrests. That’s unfortunate. We would like to hope that everybody would stop committing crimes. We hope the community bands together.”