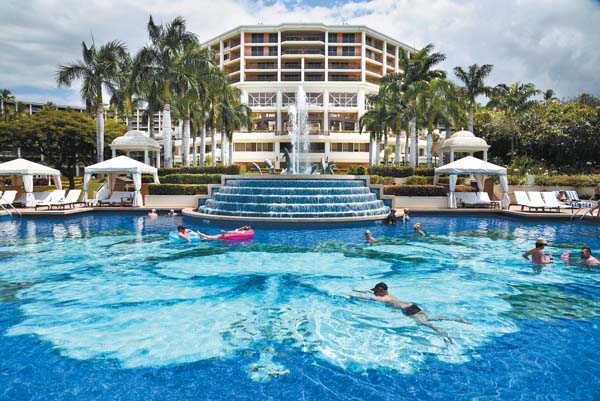 The Grand Wailea, the largest private employer in Maui County, will close to guests for 30 days starting Thursday. It was one of several large resorts to temporarily shutdown due to the coronavirus impacts. This photo of the resort was taken in 2018. The Maui News / MATTHEW THAYER photo

Grand Wailea, the largest private employer in Maui County, will temporarily close to guests for 30 days starting Thursday, adding to the lineup of major hotels closing or laying off or furloughing workers.

Grand Wailea representatives declined to disclose how many employees are being impacted. Instead, spokesman Dylan Beesley said Tuesday evening that the company is “continuing to evaluate staffing levels at the property.” The company said in December that it was “the largest private employer on Maui with over 1,450 team members.”

Workers had already been furloughed leading up to the closure, according to one employee who requested anonymity for job security reasons.

While some staff are concerned about lasting impacts on retirement, they also understand the company’s decision, another worker said.

“In the near-term people are more worried about the health of themselves, co-workers and their families,” the employee said. “It’s been extremely eerie at the hotel with hardly no guests around. Normally for this time of year we are sold out with spring break families.”

Another Grand Wailea staff member, who also asked not to be named, said no one could have predicted how this pandemic would unfold.

“I feel we’re all in a really hard place,” the worker said. “I don’t think anyone really could have been prepared for this.”

J.P. Oliver, Grand Wailea managing director, said that the Waldorf Astoria Resort decided to close with the safety of guests, team members and the community in mind.

“We are committed to doing all we can to support our team members, give them the resources they need in the short-term and get them back to work as soon as possible,” he said.

Oliver said Grand Wailea is offering financial support and health care benefits for employees who are placed in temporary furlough status. Also, employees are being informed about options to file for unemployment, find alternative work and use Employee Assistance Program services.

Health care and other benefits will not change, and employees may file for unemployment benefits. For colleagues on a Hyatt health care plan who have been furloughed or taken off of work at their hotels, Hyatt is actively taking steps to protect and fund benefit coverage (including employee benefit premiums) for up to two months, he added.

Shannah Milstead, Fairmont director of sales and marketing, also did not disclose how many have been and will be furloughed.

“The reason for doing this isn’t because we don’t want guests, it’s because we want to be safe and to take care of the community as much as we can,” Milstead said Tuesday evening. “It’s the right thing to do. It’s pono.”

Called the first of its kind in the nation to curb coronavirus spread, a 14-day self-quarantine mandate for people entering Hawaii starts Thursday. Gov. David Ige said the move, which applies to residents and visitors, will drastically reduce already dwindling visitor numbers.

Honolulu Mayor Kirk Caldwell and Maui County Mayor Michael Victorino have instituted a stay-at-home order, requiring all residents and visitors to shelter in place, except for certain essential activities.

“Although the arrival numbers are expected to be down to just essential travelers and residents by the weekend, we still have many visitors who arrived before being informed of the state and county directives,” said Chris Tatum, president and CEO of Hawai’i Tourism Authority, in a letter this week. “With airlines canceling more flights every day, it’s vital these visitors arrange for their return flights immediately.”

Many hotels throughout the state prepared to close down by the end of this week, as their occupancy dives down to single digit occupancy and for some zero percent occupancy, HTA said Tuesday.

For a list of hotels that have closed or plan to close this week, visit www.gohawaii.com/special-alerts-information.