Isle heeds order to stay home, for the most part 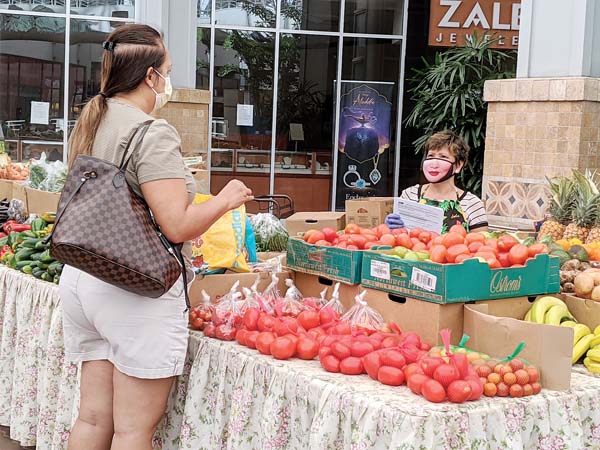 With beach parks and most stores closed and some people working from home, traffic was lighter throughout Maui as residents appeared to heed orders that took effect Wednesday to stay home to help slow the spread of COVID-19.

Except for essential businesses, including those offering health care services or selling groceries or takeout food, stores were closed at Queen Ka’ahumanu Center and Maui Mall in Kahului. In Lahaina, historic Front Street resembled a ghost town, with the majority of shops and restaurants closed and some homeless people on the street.

Traffic was busier in South Maui than in other parts of the island but still lighter than normal. It seemed to be business as usual for some beachgoers, runners, bicyclists and walkers in Kihei. Most county beach parks were vacant, with the exception of a few individuals, pairs and small groups.

With only Rodeo General Store and a food truck open, Baldwin Avenue in Makawao was quiet on a rainy Wednesday afternoon. 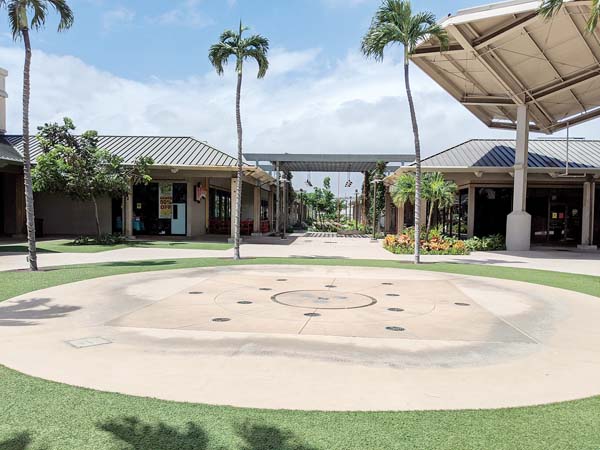 The fountain fronting Regal theaters is turned off at the Maui Mall, where benches and other seating had been removed Wednesday. The Maui News / LILA FUJIMOTO photo

Both Gov. David Ige and Mayor Michael Victorino issued orders that took effect Wednesday calling for people to stay at home except for “essential activities, essential businesses or government operations.”

Under the mayor’s order, grocery stores are allowed to remain open, and restaurants can provide takeout or delivery services.

A violation is a misdemeanor carrying a penalty of up to one year in jail and up to a $5,000 fine.

On Tuesday, Lahaina police officers were at beaches and county parks warning people about the closure of beach parks, Sellers said. 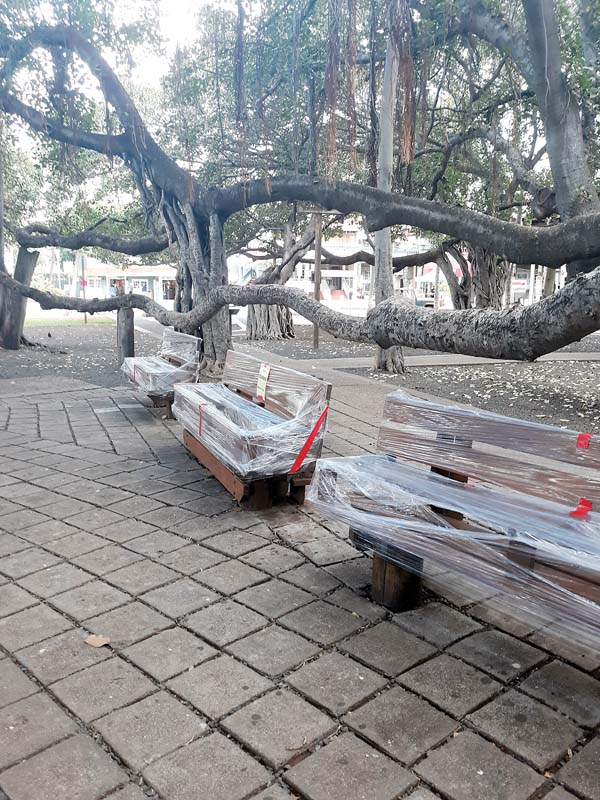 Benches at the Banyan Tree Park in Lahaina were wrapped with plastic wrap on Wednesday morning in response to the COVID-19 pandemic. The benches will remain sanitized and wrapped until further notice. The Maui News / DAKOTA GROSSMAN photo

At Olowalu, she said people were surfing Wednesday morning.

“We’re encouraging people to still exercise,” she said. “We want you to do solo or same-household activities.”

As rain fell in Wailuku town Wednesday morning, a woman carrying an umbrella was alone on the usually busy sidewalk on Main Street near the state Judiciary building.

The retired Wailuku resident, who asked not to be identified, said she was “trying to keep calm in the midst of all this upheaval” and “trying to be healthy.” 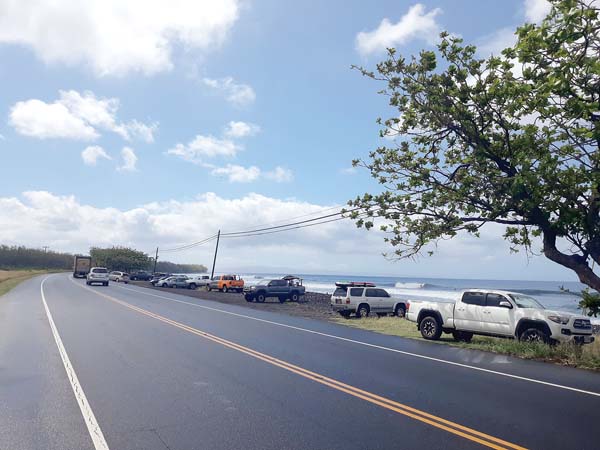 About 20 cars line the shoreline between Olowalu and Lahaina town, one of the few beaches not gated off to surfers and paddleboarders. The Maui News / DAKOTA GROSSMAN photo

She was walking toward the Wailuku bridge for exercise.

“It’s easy to become a couch potato in times like this,” she said. “I’m sorry how many people are hurting, so many difficulties for our community.”

With restrictions on gatherings of more than 10 people, she and other hula halau members can’t attend classes as they normally do. “But we are still very much connected,” she said.

Around 10:30 a.m. Wednesday, with beach parks lining the Lahaina shoreline closed, no one was seen on the beaches. Kahekili Beach Park, also known as Airport Beach and a usual hotspot for visiting beachgoers, was quiet. An occasional walker or jogger was seen on the boardwalk along the shoreline in front of Kaanapali hotels.

Few cars traversed Kaanapali Parkway and the entrance to Whalers Village was blocked, as were beach access parking lots. 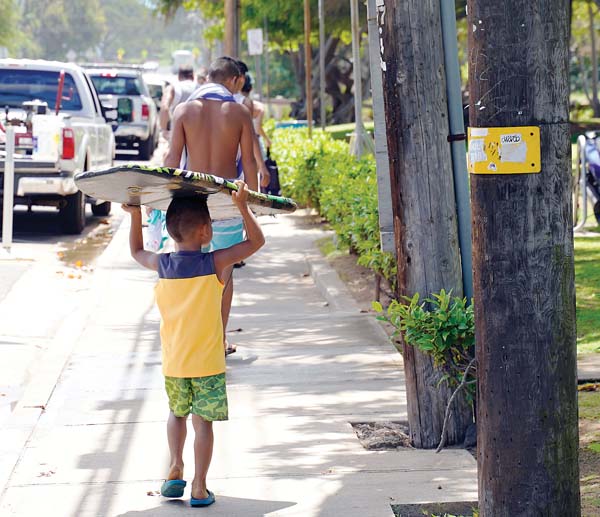 A small group leaves Kamaole Beach Park I on Wednesday, the first day of new public health emergency rules to stay at home and work from home to combat coronavirus cases through social distancing. The Maui News / KEHAULANI CERIZO photo

At Banyan Tree Park on Front Street, Spencer Perry of the Lahaina Restoration Foundation wrapped benches with plastic wrap. He said the foundation is doing its best to keep people from using the benches while the park is closed, and to ultimately combat the spread of COVID-19.

The benches are relatively new, he said, and are usually cleaned every morning by someone who was recently laid off. The courtyard will be closed until further notice, he said.

Most beach parks that were gated off were empty. Fifteen to 20 cars each were parked at Olowalu and other open beaches.

While Launiupoko Beach Park was closed, about 10 cars were parked across the street. Residents crossed Honoapiilani Highway and hopped the fence to go surfing at the beach park that is usually packed with people.

In Kihei, two people climbed past a closure sign at Charley Young Beach Park at mid-morning and walked down to the shoreline with beach chairs on a mostly deserted beach. 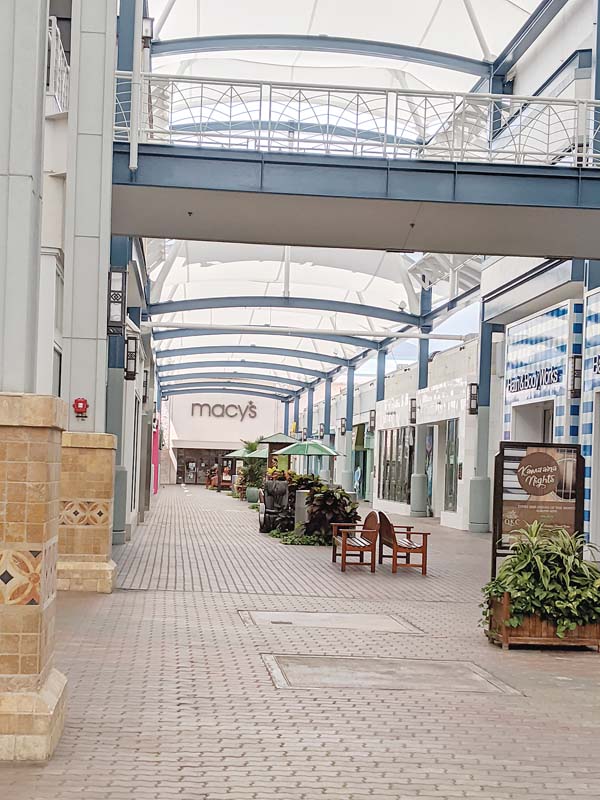 With most stores closed, the corridor leading to the Macy’s store at Queen Ka‘ahumanu Center is empty Wednesday morning. The Maui News / LILA FUJIMOTO photo

Kamaole Beach Parks I and II were busier. About 15 surfers and stand-up paddleboarders were out at Cove Beach Park in waist-high, glassy wave conditions. Three fisherman were set up on the rocks overlooking the cove.

One group of about 10 was walking on the sidewalk north of Maui Coast Hotel, not observing social distancing measures.

There were open parking spots along normally busy South Kihei Road. Only a handful of businesses, including eateries, were open for takeout and groceries.

At Maui Mall, Longs Drugs and Whole Foods Market were open, along with Pizza Hut and Genki Sushi for takeout orders. The fountain fronting the closed Regal Maui Mall Megaplex theaters was turned off and most benches and other seating had been removed.

While most Queen Ka’ahumanu Center stores were closed, Longs Drugs, Sears, Foodland and LensCrafters were open, as were restaurants offering takeout.

The farmers market, held three times a week at Center Court, was open.

Kaupo resident Linda Clark said she drove to the market to buy ginger and garlic, after not finding the items at Foodland in Pukalani.

“We’re coming from far,” Clark said. “Yesterday, our families from Kaupo came and couldn’t get all the necessities, so I’m trying to find some things for them.

“I’m glad that we can still come out to get essentials. It’s just hard on the elderly, especially.”

Clark said she was planning to buy what she needed, then go back home.

Susan Valdez, assistant to the market organizers, said six vendors were at the market, down from the usual 10.

She said more people appeared to be staying home Wednesday.

“Yesterday was much, much busier,” she said. “But we are OK. It affects the business, but what you going do?”

Construction worker Sumpeni Lemi, taking a lunch break with a co-worker at one of the few tables and seats available at the mall, said he hadn’t heard about the order to stay home.

“I don’t even watch the news,” he said. “It’s too late now. It’s here. No sense crying over spilled milk.”

He said people should have been stopped at the airport.

Lemi said he has had to work harder because other workers returning to Maui from recent vacations have been in self-quarantine.

Lt. Sellers said “police will continue to respond with compassion,” in enforcing the orders, starting with education, then advancing to warnings and reprimands.

“I think people, as a general rule, want to comply,” she said. “During this hard economic time, we don’t want to have to cite people.

With most stores closed, the corridor leading to the Macy’s store at Queen Ka‘ahumanu Center is empty Wednesday morning. The Maui News / LILA FUJIMOTO photo

The fountain fronting Regal theaters is turned off at the Maui Mall, where benches and other seating had been removed Wednesday. The Maui News / LILA FUJIMOTO photo

Benches at the Banyan Tree Park in Lahaina were wrapped with plastic wrap on Wednesday morning in response to the COVID-19 pandemic. The benches will remain sanitized and wrapped until further notice. The Maui News / DAKOTA GROSSMAN photo

About 20 cars line the shoreline between Olowalu and Lahaina town, one of the few beaches not gated off to surfers and paddleboarders. The Maui News / DAKOTA GROSSMAN photo

Haloa Dudoit bats during a Concordia University Irvine game earlier this year. Dudoit, a 2016 graduate of Baldwin High School, was hitting .347 with a team-high 35 hits, eight doubles and 12 RBIs this season when it was halted due to the new coronavirus. CUI Athletics / Troy Makalena photo

Haloa Dudoit tags out a runner during a game. Dudoit played every inning at shortstop for all 171 games of his career at Concordia Irvine. CUI Athletics / Troy Makalena photo

A small group leaves Kamaole Beach Park I on Wednesday, the first day of new public health emergency rules to stay at home and work from home to combat coronavirus cases through social distancing. The Maui News / KEHAULANI CERIZO photo

Beachgoers pass closure signs to access Charley Young Park in Kihei. Beaches and sidewalks had a moderate to light amount of people Wednesday, the first day of new emergency public health rules to stay at home and work from home. The Maui News / KEHAULANI CERIZO photos

Ryder and Jack Leone stand in their new treehouse built while the family was in self-quarantine. The sign “Maui Bro Co HQ” is made of Nerf bullets. Photo courtesy of Leone family

The Maui News WAILUKU — A man and woman were arrested when police reported finding quantities of drugs and a ...