Twice as many excessive speeding tickets being issued 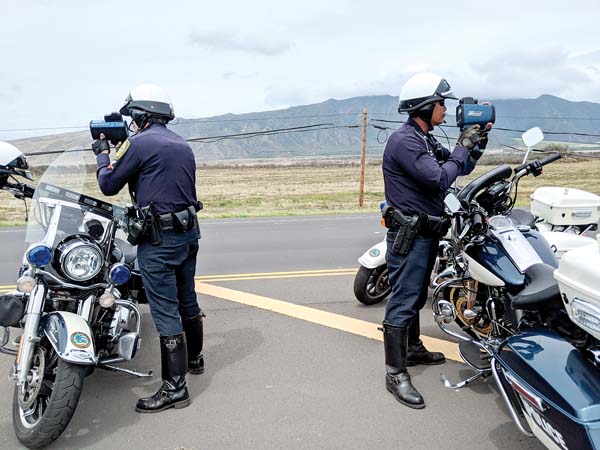 Police solo bike officers James Burkett (left) and Marlon Madariaga focus their laser measuring speed devices on vehicles traveling in opposite directions on Maui Veterans Highway in Puunene on Thursday morning. Some drivers were cited for excessive speeding on the stretch of the highway where the speed limit is 40 mph. The Maui News / LILA FUJIMOTO photos

PUUNENE — With noticeably less traffic as people follow government orders to stay home, some drivers are exceeding speeds of 70 and 80 mph on major highways, leading police to issue twice as many citations for excessive speeding over the past week.

The higher speeds have been logged on highways including Maui Veterans, Piilani, Kuihelani and Honoapiilani, where posted speed limits range from 40 to 45 mph, said Lt. William Hankins, commander of the police Traffic Section.

“There’s no reason for these speeds to be this high, no reason,” Hankins said. “Everybody’s legitimately going somewhere, but they’re trying to get there too fast. There’s no reason to rush to wait in line at Costco.”

On Maui Veterans Highway near the entrance to Maui Motor Sports Park in Puunene, solo bike officers James Burkett and Marlon Madariaga were kept busy ticketing speeding drivers in both directions. Some drivers were cited for excessive speeding for traveling at least 81 mph or at least 30 mph over the posted speed limit of 40 mph. Those cited for excessive speeding are required to appear in court. 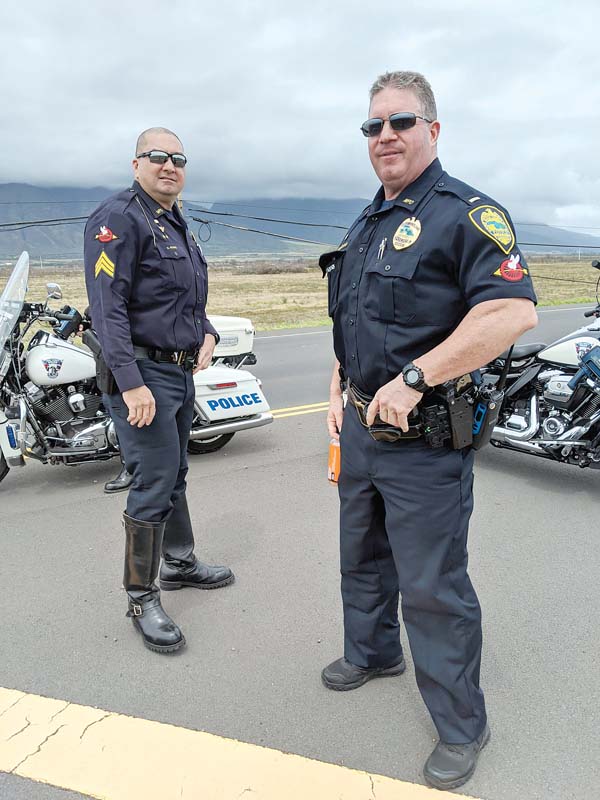 One driver was cited for going 76 mph, which equates to moving at 111 feet per second, Hankins said.

Instead of drivers speeding at 50 or 55 mph, police began seeing speeds of 60 mph and higher, Hankins said.

In Kihei, he has seen drivers going 65 and 75 mph on Piilani Highway, where there’s “zero shoulder” and where more people have been out bicycling, walking and jogging.

Hankins said the increase in speeding is one reason he decided not to have traffic officers participate in a nationwide distracted driving enforcement campaign targeting the use of cellphones and other mobile electronic devices.

“There’s just other issues we need to be dealing with,” he said. “Right now, we have a bigger problem with people flying down the highways. We have doubled our excessive speeding citations in the last week. There’s people driving insane.”

Rowe said traffic officers have cited some drivers for violating the state move-over law that requires motorists to stop or slow down to below the speed limit and move into the adjacent lane if safe to allow an open lane between police cars, ambulances and other emergency vehicles stopped with emergency lights flashing.

With concern over the coronavirus, officers are taking protective measures, including using sanitizing wipes after issuing a citation and making contact with people, Hankins said.

“You can’t stop doing this because of the virus. We can be more cautious about how we do our jobs,” Hankins said. “The speeds are so high that it demands our attention.”

On Thursday, as traffic moved in waves on Maui Veterans Highway, the speeding continued despite the presence of three police motorcycles, an unmarked police car and four uniformed police officers in the median separating Kihei- and Kahului-bound traffic.

“That just shows you people are oblivious to their surroundings,” Rowe said.

Some drivers flashed their lights in warning and others made social media posts.

“Everybody likes to complain when we do enforcement,” Hankins said. “But when we have to shut the road down because someone was killed, they complain twice as loud.”