Recreational options for families on break dwindle because of virus 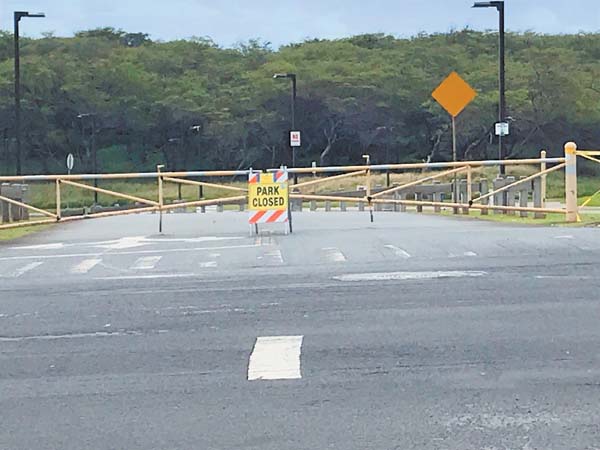 A “park closed” sign could be seen up against the locked yellow gates at the Kanaloa Avenue entrance to Keopuolani Park in Kahului on Tuesday. Maui County closed its parks beginning Saturday. The Maui News / MELISSA TANJI photo

KAHULUI — Activity options for schoolchildren on extended spring break have shrunk with movie theaters, libraries and open air parks in Maui County closed due to the coronavirus.

Maui County was the only county in Hawaii to close all open-air parks, according to a review of other counties by The Maui News. Honolulu County had all open-air parks open — and the Honolulu Zoo, though this later closed due to flooding — but closed Hanauma Bay because visitors had to watch an educational video together.

Federal and state officials have emphasized the need to limit congregations of people to no more than 10 to control the spread of COVID-19. 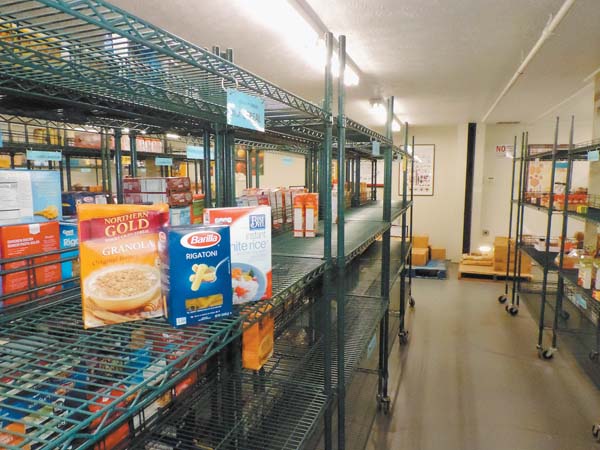 Food is sparse on the Maui Food Bank shelves in Wailuku. The Food Bank is asking for the community’s help given the COVID-19 pandemic, which will tap its limited supplies. ERICK ACIDERA photo

Maui County Managing Director Sandy Baz said the county imposed the outdoor park restrictions because the majority of inland parks have active playing fields that are used for sports, such as soccer and baseball, that attract spectators.

Because the county cannot control the numbers of spectators or make sure everyone is practicing social distancing, the county parks department decided to close the facilities, Baz said Tuesday afternoon.

People have been spotted over the weekend at Central Maui Regional Park, parking their cars outside the closed yellow gates and taking a stroll inside the park and walking their animals. Others were seen playing tennis at Kahului Community Center’s courts, which also are off-limits.

“Officially, if a park is closed, they are not supposed to be in a park,” Baz said.

Neither Baz nor other county officials discussed possible penalties or enforcement.

As for the difference between having beach parks open versus playing fields, Baz said beach parks offer a wider open space to maintain social distancing, and no sports teams gather there.

In other matters related to the coronavirus pandemic, Kamehameha Schools announced a revised schedule for its Pukalani campus Tuesday night that involves distance learning.

Students are now off through March 26, Kuhio Day, said Kamehameha Schools spokeswoman Crystal Kua. On March 27, teachers will test the use of online instructional tools with students.

Maui Economic Opportunity’s Head Start centers, which provide preschool and other services to low-income families, closed this week for spring break and will close next week, as well, following the state Department of Education announcement of the extension of the break until March 27.

MEO is asking for assistance for its Head Start families; a lack of food is one area of need. Nonperishable foods sought include canned beans; peanut butter or other nut butters; boxes or packaged crackers; instant rolled oats; and canned fruit in juice (not in light or heavy syrup), vegetables with no or low sodium, soups, tuna, chicken, rice, nuts, pasta, broths and stock.

Donations may be delivered to MEO Head Start Office at 99 Mahalani St. in Wailuku from 8 a.m. to 3 p.m. Monday to Friday (except March 26 Kuhio Day). MEO asks donors to leave food items in boxes or packages outside the office to maintain social distancing.

The Maui Food Bank also posted an “urgent” call for food “to fill our empty shelves.” Keith Wright, director of operations, said in a email that “the coronavirus came at the worst time in regards to the Food Banks’ inventory.”

He said January through May is a crucial time for the Food Bank to collect donated food for current needs and to prepare for the busier summer months.

“Our grocery store donors are trying to keep up with the demands of their customers and have limited available donations for the Food Bank,” Wright added.

Those interested in helping can go to the website mauifoodbank.org and click on the “Virtual Food Drive” to purchase food for the hungry or to make a monetary donation.

The library system said due dates and holds automatically will be extended to accommodate the closure period. The library will need to temporarily turn off the hold feature for new holds until the libraries reopen.

Library materials still may be dropped off at any of the branch libraries. The state library website at librarieshawaii.org remains in operation.

Other children’s activities that have closed include:

• Ultimate Air Maui has put a “pause” on its jumping facility beginning today. All reservations including spring break camp, birthday parties and group events will be rescheduled. It is going to make its 25,000-square-foot indoor warehouse space available to Maui County, according to an Instagram post.

• Monkeypod Art & Creative Studio in Wailuku said Sunday on its Facebook page that it is temporarily closing.

• Consolidated Theatres Kaahumanu 6 at Queen Ka’ahumanu Center announced Tuesday that it is temporarily closing, according to its Facebook page and signs on the door. On Monday, Regal Cinemas in Maui Mall announced its closure.

Also, organizers for the annual Lahainaluna High School David Malo Day, set for April 4, said the event has been canceled. They said in an email that the cancellation was done with a “heavy heart” but that everyone must be “stewards of our community, our humanity.”

They are looking forward to next year’s David Malo Day to be scheduled in April.

** This story includes a correction from the original published March 18, 2020.