County mulling end to short-term rental homes; no bill yet

Maui County Planning Director Michele McLean (center) discusses a possible phaseout of short-term rentals of single-family houses on Maui and Lanai during a meeting Friday. There is no proposed bill or plan in place; the subject is in the discussion phase, according to county officials. — The Maui News / KEHAULANI CERIZO photo

“Do you punish your child when they’re brushing their teeth?” asked Margit A. Tolman, a property manager and Haiku resident, during a presentation Friday at the county Planning Department conference room.

The department is mulling the phaseout of short-term rentals for single-family residential homes, which are permitted to rent for fewer than 180 days.

Vacation rentals in condos or hotels and those with conditional permits would not be impacted. Also, bed and breakfasts are not included. 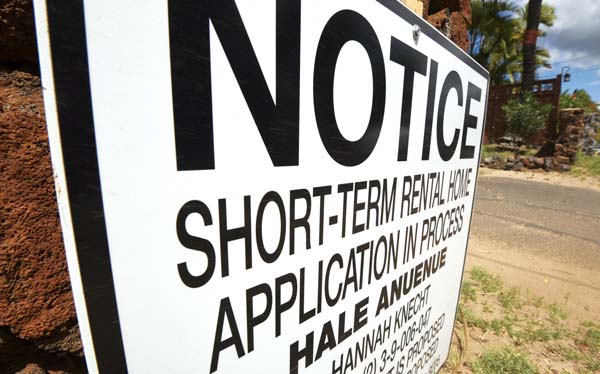 A sign on Ohukai Road in Kihei announces the property’s owner has a short-term rental home application in process. The county is considering phasing out short-term rentals in single-family dwellings; owners have said the move would unfairly punish legal operations. — The Maui News / MATTHEW THAYER photo

Speaking before more than 100 passionate and at times unruly attendees Friday afternoon, Planning Department Director Michele McLean repeated that the phaseout is in discussion stages only, and no bill has been drafted.

Any changes to existing law would require a proposed bill, and that would have extensive public hearing opportunities before the Planning Commission and the Maui County Council.

Friday’s meeting comes on the heels of the council’s recent decision to establish a cap of zero STRH permits for the island of Molokai, which will phase out 17 existing permits.

In discussing a phaseout for Maui and Lanai, the Planning Department pointed to community concerns that people no longer know their neighbors in residential areas with STRHs. Also, officials said that the original STRH bill was partially intended to rid the county of illegal rentals, which it did not.

“The original intent was to get properties into compliance; this 229 is in compliance,” McLean said. “This did not stop the illegals.

“A short term rental home can be quiet and respectful, but what we’re hearing is people don’t know who their neighbors are. Those two things are the reason we’re putting this forward for discussion.”

She added that the department hears regularly from long-term renters who are displaced because their landlord decided to convert to a STRH.

The presentation said visitors can stay in zoning districts that allow transient vacation rental use, such as hotel, business and commercial districts.

Jeremy and Amber Peterson, Kihei residents who own a permitted short-term rental home on Lanai, said that of the 21 renters they’ve hosted, 17 are kamaaina. They charge under $200 per night.

“If we do away with that, where are people going to stay? At the Four Seasons, paying $1,500 a night?” Jeremy Peterson said. “We’ve worked hard and we’re trying to pay taxes and be legit.”

The majority of participants were against possible phaseouts, saying that they have worked hard to comply with rigorous conditions to obtain and keep a permit.

“I’m trying to do everything right, and yet here are I am,” said one woman, who spoke between tears at the standing-room-only meeting, which spilled out of the conference room into the hallway.

After the meeting, Council Member Tamara Paltin, who holds the West Maui residency seat, said that although she does not want additional STRHs, she is OK with the current number in residential homes because “they’re the most heavily regulated short-term rental occupancy units out there.”

Instead, Paltin suggested making the existing ones the cap, and gathering more information on the total number of short-term rentals that are allowed to legally operate within the county and the different mechanisms by which they are allowed to operate.

“What we did on Molokai is because over the years they consistently said zero, the Molokai Planning Commission said zero, the East End Policy said zero, it was a big drawn-out discussion and that’s what we went with.

“On Maui it’s never been that they wanted zero. The problem is there are so many different ways you can have a short-term rental home. You can’t just discuss just one type.”

“We will review our notes from these meetings, as well as the hundreds of emails that we received, and then decide what action — if any — to take,” she said after the meetings Friday.

The presentation will be posted on the county website Monday, and it will be updated with any future proposals and other information.

WHY PHASE OUT SHORT-TERM RENTAL HOMES?

The Planning Department is mulling a possible phaseout of short-term rentals for single-family residential properties. The idea is in discussion phase, and there is no proposed bill written. It would not apply to vacation rentals in condos or hotels, or those with conditional permits; also, bed-and-breakfasts would not be impacted. On Friday, the department presented an idea of how the plan might work and what it would do:

• STRH owners can sell, occupy, rent long-term or apply for a conditional permit or a B&B permit.

• Neighbors get their communities back.

• Home and rental prices stabilize somewhat due to increased supply.

• Owning a house might become an option for some.

• Visitors stay in hotels and patronize the businesses created for them.